From the roots of this Council Oak, the city of Tulsa sprang. 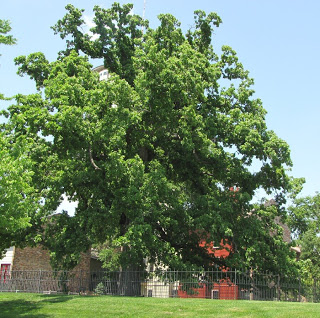 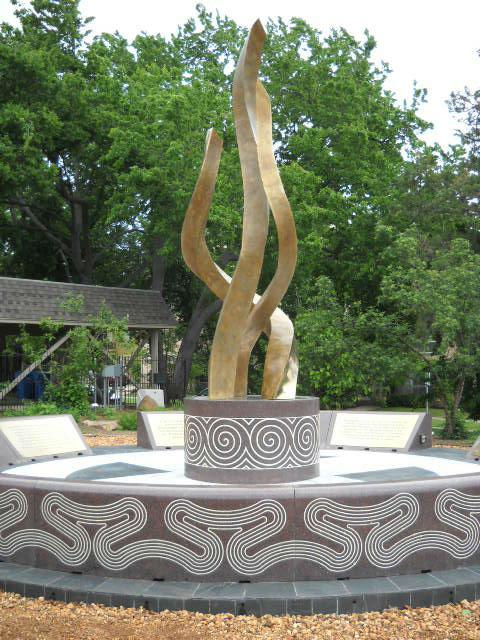 In 1836, the Lochapoka band of Creek (Muscogee) Indians ended their Trail of Tears march under the spreading branches of this sapling tree. Of the 660 who had set out on the journey, only 161 survived. Upon their re-settlement in Oklahoma territory, the Lochapoka Creek chose this young burr oak to mark their new “busk ground,” or ceremonial site. Here, they scattered the ashes from the final ceremonial campfire held in their Alabama homelands and lit a fresh fire to establish their new home. This burr oak tree where the Lochapokas conducted the tribe’s affairs was Tulsa’s first town hall, church, and courthouse. Records show that the site was in use by the Lochapokas as late as 1896.

The Lochapoka called this site, “talasi,” meaning “Old Town.” White settlers to the area later mispronounced the word as “tulsa,” which was is how the city of Tulsa got the name it bears today. In 1915, oilman Harry Ford Sinclair purchased the site from the Creek Nation. While the Council Oak was spared that it may serve as the landscaping centerpiece for Sinclair’s brick mansion, the rest of the Lochapoka allotment was rapidly developed into a thriving residential community. The ridiculously undervalued lots were snapped up by the likes of Josh Cosden, Grant Stebbins, and Harry Sinclair’s brother, Earl.

Decades passed, and with them the grandeur of the neighborhood. The Sinclair house was briefly owned by Oral Roberts, whose evangelical association razed the mansion before passing the land on to a Texas investor. The investor planned to raze the Council Oak to build a parking lot, which would have been a part of Tulsa’s Model Cities urban renewal program. This latter move created a court case that went all the way to the Oklahoma Supreme court. During the drawn-out legal proceedings, the property fell into foreclosure and was put up for auction.

On the day before the auction, H. D. “Nat” Henshaw gathered a group of concerned Tulsans who understood the importance of preserving this historical site. The investors gathered a bid and presented it at the sheriff’s sale. The group’s bid won and the site was spared. On September 29, 1976, the Council Oak was placed on the Register of Historic Places under Criteria A. This move preserved the tree and its immediate grounds for the benefit of the Creek Nation and the public. The city of Tulsa placed the Council Oak under historic preservation zoning in January of 1992.

Currently, the great Oak is located in a small pocket green in midtown Tulsa called Council Oak Park. The Park was designed by Yuchi-Creek architect Richard Thornton. In addition to the Council Oak, a beautiful commemorative sculpture created and built by Creek sculptor Dan Brook commands park visitors’ attention. Entitled “Morning Prayer,” the installation is comprised of 3-4 foot bronze flames atop a base of white marble encased in two terrazzo rims. The bottom rim is inscribed with the symbol of the Creek Wind Clan, which was the clan of the priests. The top rim is encircled with the sacred Etalwa Cross symbol. The rims themselves are shaped like traditional pottery kilns, which symbolize the trials endured by the Creek people on the Trail of Tears.