Musica is a bronze statue by Alan LeQuire. The statue pays tribute to the whimsical nature of music, and features men and women dancing around a woman playing the tambourine. The statue is located in the traffic roundabout near Music Row in downtown Nashville. It was built as part of an urban renewal project for the Music Row neighborhood and unveiled in 2003. The total cost of the project exceeded one million dollars, with funds coming from a number of local patrons of the arts.

Musica features nine dancing figures, designed to reflect the diversity of the city of Nashville, coming together through music and dance. 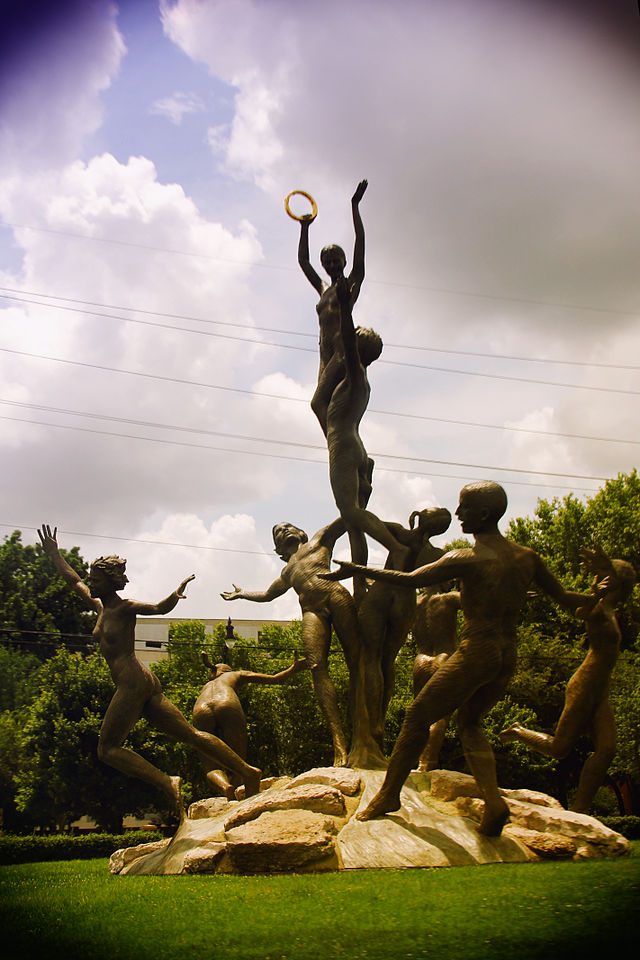 In 1999 the city of Nashville was approached with a proposal to erect a privately-funded sculpture on a new roundabout being built in the historic Music Row neighborhood. The sculpture would pay homage to the neighborhood’s role in launching Nashville’s music industry. Ultimately $1.1 million was raised by anonymous donors for its creation. Artist Alan LeQuire, whose portfolio includes works in Vanderbilt University and the Country Music Hall of Fame, was commissioned to design the sculpture. LeQuire named his work “Musica,” the Latin word for “arts of the Muses.”

Musica stands thirty-eight feet tall, weighs around ten tons, and is believed to be the largest bronze figure group in the United States. It consists of nine bronze, nude figures, each around fourteen feet tall, standing on a base of limestone boulders. Five figures form a circle on the base, while the other four float above them in the middle. The figures are depicted in the act of dancing, and a woman in the center holds a tambourine. To reflect the ethnic diversity of Nashville LeQuire included two Caucasian women, one Caucasian man, an African American man and woman, a Hispanic man and woman, an Asian American woman, and a Native American man. The dancing figures are meant to act as a physical representation of artistic creativity. LeQuire’s original design included a series of fountains surrounding the sculpture but budget constraints forced those plans to be scrapped. Pieces of the sculpture were cast at a foundry in Lander, Wyoming and shipped to Nashville.

Musica was installed on the Buddy Killen Circle roundabout and unveiled on October 11, 2003 in a ceremony attended by around 2,000 people. Initially the sculpture raised controversy due to the figures’ nudity. Critics argued that it was obscene, inappropriate for children, and that nudity had no significant connection to music. One pastor reportedly complained that depictions of nudity could be displayed on public property, but that the Ten Commandments could not. Over the years Musica has been the victim of several pranks, with people placing clothing on the figures.

In 2016 a non-profit group called the Fountains of Musica was formed and announced its intention to raise money for installing fountains around the sculpture. Proposed fountains have been designed by aquatic engineering firm WET and include lighting and multiple choreographed water shows. A child-friendly, interactive water fountain is planned to be installed at the nearby Owen Bradley Park as well. Estimated costs for the fountains are expected to be $10 million.