Circle Tower is part of the Washington Street—Monument Circle Historic District. It is also a great examples of Art Deco architecture and noteworthy for its interior metal work. 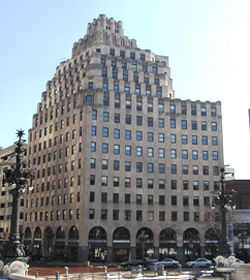 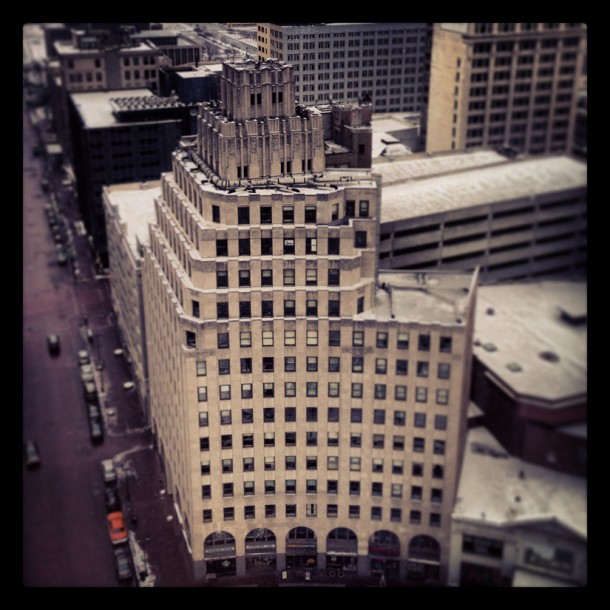 An overhead shot of Monument Circle with Circle Tower at the lower left. 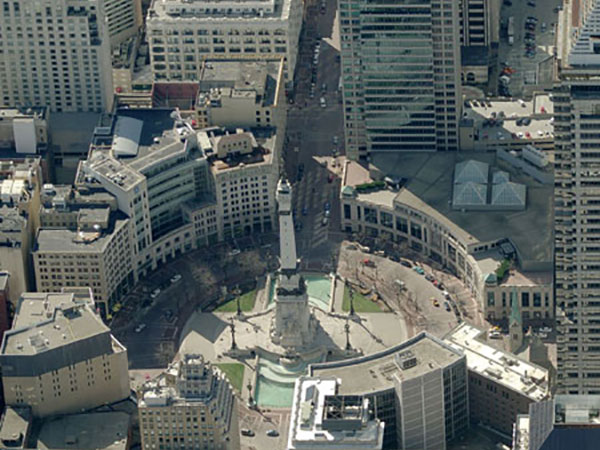 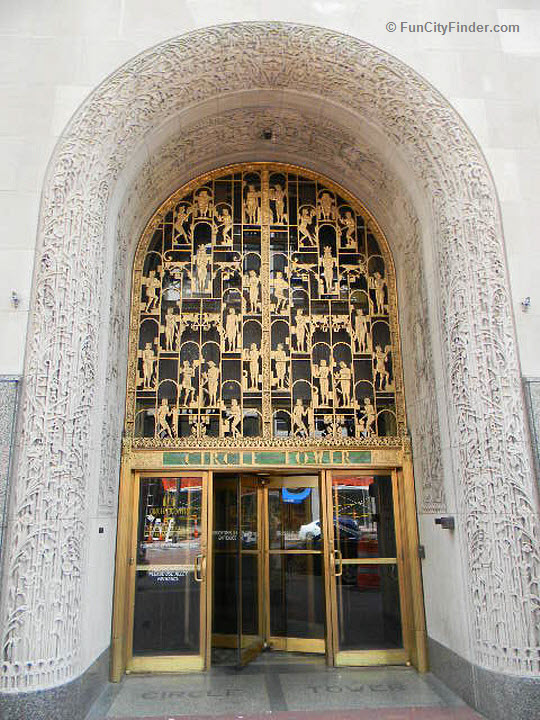 The art deco architecture of Circle Tower is readily apparent when looking at its ornate elevator station in its main lobby. 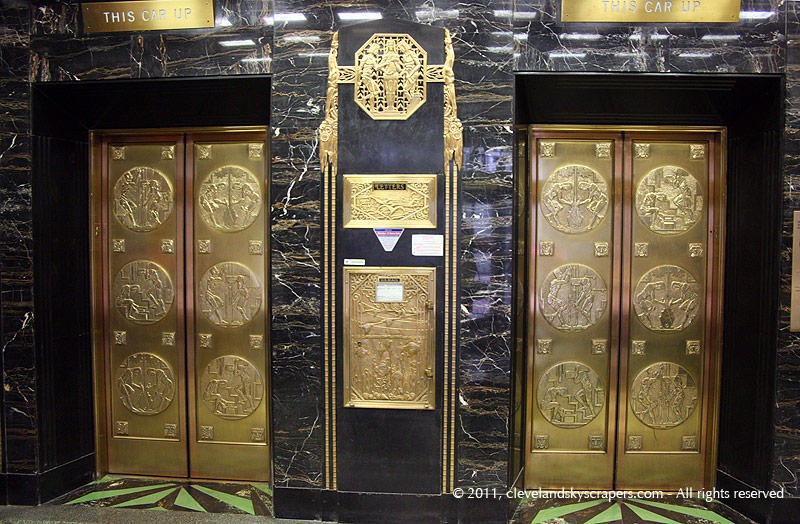 The combination of art deco and ancient Egyptian influences are seen in the design of this second-floor spa from 2012. 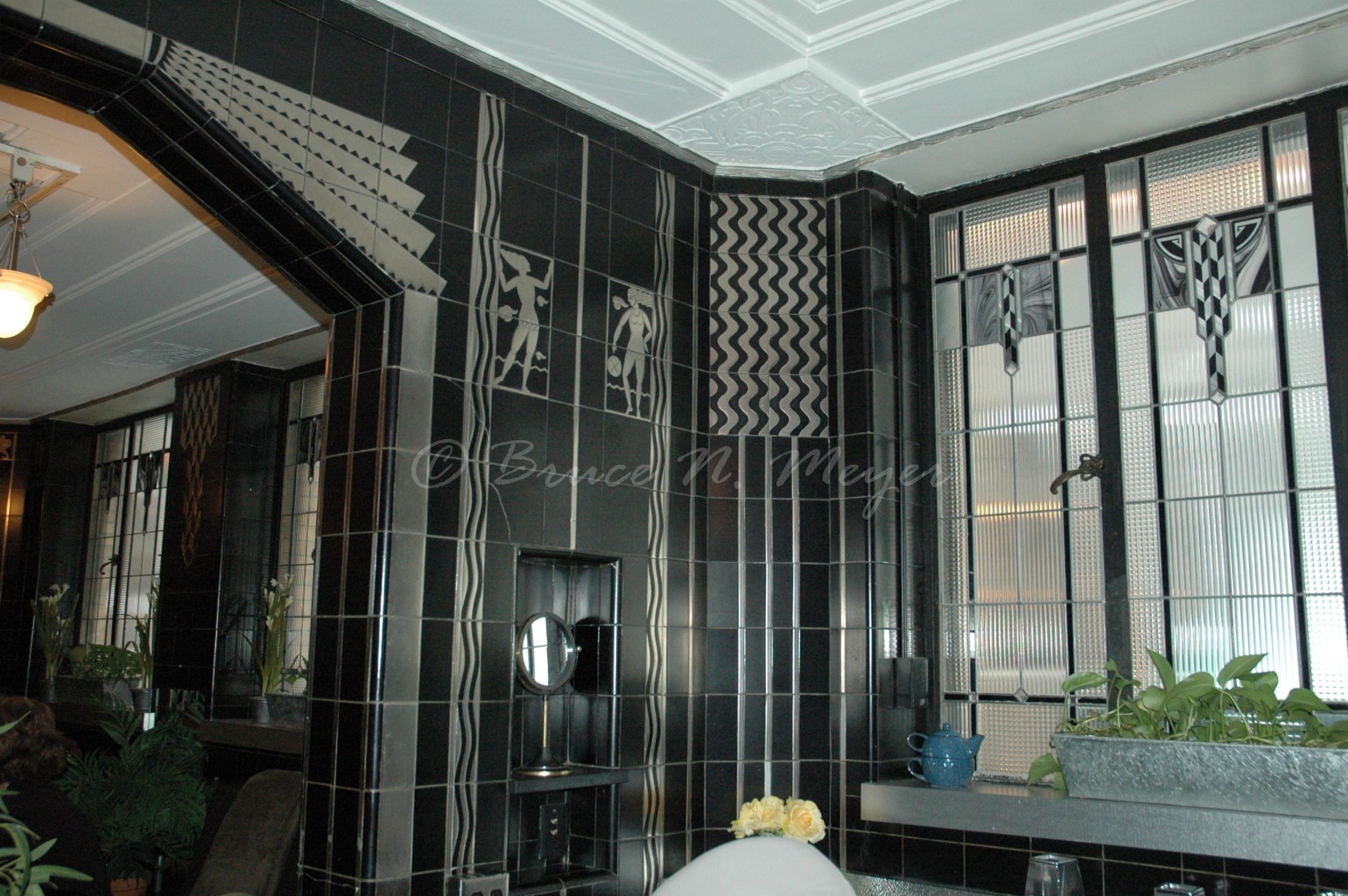 In 1922, British archaeologist and Egyptologist, Howard Carter, uncovered the intact tomb of the boy king, Tutankhamun, and its reverberations were felt across the globe, to include Indianapolis.  When the architectural firm of Preston Rubush and Edgar Hunter began to design the Circle Tower in the late 1920s they were greatly influenced by two themes; the first was the art deco movement then sweeping the architectural world and the second was the sudden interest in all things related to ancient Egypt then sweeping the rest of the world.

The ziggurat-like structure was built with terraced floors, above the tenth, with the one above stepping back from the one below.  This unique design feature was created for practical as well as aesthetic reasons.  The major feature of Monument Circle is the Soldiers and Sailors Memorial that sits at its center.  In the early 20th century, the city sought to prevent the memorial from being constantly in the shadows of the increasingly taller buildings being built around the Circle.  To that end, they passed zoning ordinances that restricted building heights and Rubush and Hunter complied with those ordinances with the Circle Tower’s stair-like design.  Another interesting design feature is the building’s curved façade that follows the circumference of Monument Circle.

Circle Tower combines the geometric forms, pastel colors and sleek lines of the art deco movement with Egyptian elements such as hieroglyphic figures, especially on the gilded screen located above the arched, recessed Market Street entrance and the elevator doors in the main lobby.  That main lobby also sports dark, polished marble walls with chrome and gold-colored accessories and terrazzo floors.  Its ancient Egyptian and art deco influences can also be seen in other locations within the tower, such as its second-floor spa that includes dark tile walls with silver accents and figures.

The 114,000 square feet of Circle Tower, since its completion in 1930, has been home to various businesses who have used its upper floors as office space and its ground floor for retail shops.  It was purchased by the Ambrose Property Group from Winthrop Realty Trust in 2012 for the price of $6 million.  Ambrose, in turn, then sold it to the Chicago-based Level Office in 2016, a company known for creating co-working spaces in the buildings it owns.  Level Office plans to renovate part of the tower’s interior to create communal work spaces as well as private offices for its tenants.