At this location is the final resting place of Revolutionary War soldier Samuel Ferguson (1744-1825) and his wife Mary Jameson (1746-1827). Ferguson served in the Montgomery County Virginia Militia and fought in the Battle of Alamance in North Carolina and the Battle of King's Mountain in South Carolina. He also was one of the first frontier settlers in present day Wayne County, WV. 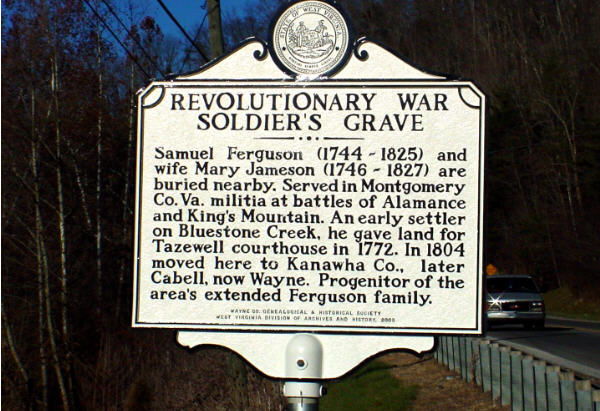 The headstone marking the graves of both Samuel Ferguson and his wife Mary Jameson. 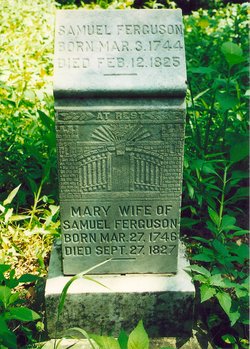 In a small cemetery beside route 152 in the town of Wayne, WV, is the final resting place of Revolutionary War soldier Samuel Ferguson and his wife Mary Jamison.  Samuel was born in 1744 and settled in Augusta County, Virginia in the 1760s. During the Revolutionary War Samuel served in the Montgomery County, Virginia Militia and fought in the Battle of Alamance in North Carolina and the Battle of Kings Mountain in South Carolina.

The Battle of Alamance occurred on May 16th, 1771 in North Carolina. After years of increasing dissatisfaction with the Royal Government, an armed group of backcountry farmers nicknamed “the Regulators” rebelled against the colonial militia of Royal Governor William Tryon. Due to a lack of organization, leadership, and adequate firearms and ammunition, the rebels were easily defeated by Tyron’s well-armed and organized militia. After the smoke had cleared, nine members of the Colonial Militia were killed and sixty-one were wounded. It is unknown how many of the rebels were killed or wounded, however, Governor Tyron took 15 prisoners and executed seven of the Regulators by hanging.

The Battle of Kings Mountain took place in South Carolina on October 7, 1780. On this date, a group of about 1,000 patriot American frontiersmen under the leadership of Colonel Campbell of Virginia gathered in the backcountry of South Carolina to stop the advance British forces under the leadership of Major Patrick Ferguson. Major Ferguson positioned his troops at the top of a barren ridge called “King’s Mountain”. Colonel Campbell’s forces surrounded the British and charged up the mountain with great success. Although defeat was imminent, Major Ferguson, unwilling to surrender, led a final charge down the mountain where he was killed. The British forces suffered a staggering defeat with 157 killed, 163 wounded, and 698 taken prisoner. The rebel forces only suffered 28 killed and 60 wounded.

After the Revolutionary war, Samuel Ferguson and his family moved west to what is now West Virginia. Prior to 1794, much of what present day southern Ohio, western West Virginia, and eastern Kentucky, was uninhabitable due to a strong Native American presence. However, on August 20, 1794 General “Mad” Anthony Wayne defeated a confederation of allied Native American Tribes at the Battle of Fallen Timbers near present day Toledo, Ohio, opening up these areas to European-American settlement.  Sometime around 1804, Ferguson became one of the first frontier settlers in the twelve-pole valley in Wayne County, West Virginia.

Cemetery open to the public at all hours.