Founded in 1817, the Portsmouth Athenaeum is a membership library dedicated to preservation of local history through the maintenance of a library, a museum, educational programs, and guest speakers. In 1824, the Athenaeum moved to its current location. In the 19th century, public libraries were scarce but dozens of cities were home to similar private libraries that supported their operations through donations and membership fees. Many of these institutions were known as "Athenaeums," a name that indicated that the organization offered more than a library, with programs and other activities that would promote education and culture. The Portsmouth Athenaeum’s library contains over 40,000 volumes, an archive of manuscripts and photographs. Today, most of the events held at the Portsmouth Athenaeum are free and open to the public.

Exterior of the Portsmouth Athenaeum 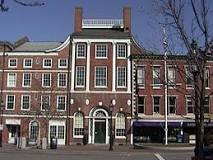 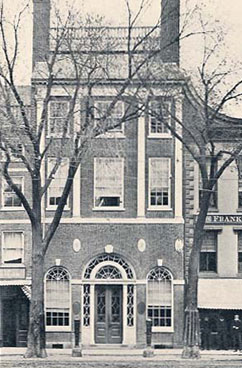 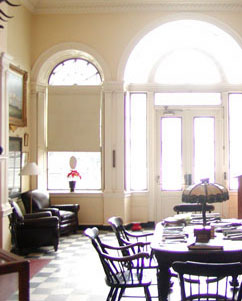 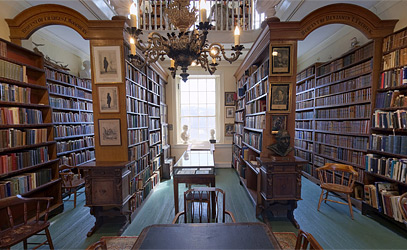 Placard on an exhibit of works by Russell Cheney that was on display at the Athenaeum. 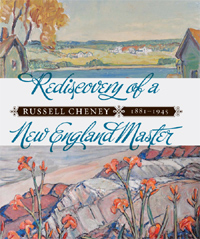 Early in his 1883 history of Portsmouth, NH, author Thomas Bailey Aldrich describes the city of Portsmouth and its surroundings as he viewed them from the roof of the Athenaeum.1 Aldrich describes nearby islands, villages, along with Portsmouth’s churches and hotels. Aldrich leaves an image of the Athenaeum being central to the culture of both Portsmouth and the Piscataqua River region. In 1750 a group of Portsmouth citizens brought together a small collection of books, established a lottery to provide funding for a library. The effort was unsuccessful.2  In 1817 a corporation was formed, under the name Portsmouth Athenaeum, whose purpose was to establish a library.

In 1824, the Athenaeum reorganized and purchased the building it currently occupies. Originally constructed in 1805 for the New Hampshire Fire and Marine Insurance Company, the four story federal building is a Portsmouth landmark. Designed and built by Portsmouth architect Bradbury Johnson. Placed on the National Register of Historic Places in May of 1973, the building features an arched doorway and ornate cornices. A reading room was established on the first with the library and museum on the upper floors.3 The Corporation issued 100 shares of stock to members, and issued new by-laws. By-laws provided that Directors could allow non-members access to the library.4

Library collections include works by John Langdon, William Whipple, and Tobias Ham Miller. Diaries and letters written by many local residents are housed in the archives. Records relating to the Portsmouth Female Asylum and many of Portsmouth’s churches are among the archives collections. Many local organizations including the Portsmouth Yacht Club, the New Castle Bridge Association, and the Mechanic Fire Society house their records in the Athenaeum. The Archives are also home to the papers of the Portsmouth Historical Society and many of the areas many historic homes.5 Because of Portsmouth's connection to trade and shipbuilding there are many documents connected to those industries.6

In 1968, renovations were conducted on the building’s exterior. Originally carved by local artisan, William Dearing, the ornate carved wood trimmings included four columnn capitals and four oval paterae. Alvin F. Staples, a local carver with experience with restoration of wooden objects remade the pieces. Dearing was one of the region’s most prominent carvers.7

The Athenaeum displays exhibits connected to Portsmouth’s history. Past exhibits include an art exhibit titled “Russell Cheney A New England Master Northern New England Paintings 1910-45”, “War and Peace: Images from the Russo-Japanese War 1904 – 1905” and "To Restore Our Glorious Union" Portsmouth & The Civil War.8 A calendar of events is located on the Athenaeum’s website.