A restored railroad depot built In 1900 by the Queen and Crescent Railroad Company that extended out of Cincinnati Ohio built for the purposes of extending travel and commerce to the south. In addition to it's function of providing access to the southern areas of the United States, the Depot eventually became a museum that chronicled the story of a group of female rebels dubbed "The Rhea County Spartans." During the course of the Civil War these Women Served as spies for the Confederate Army. However they were eventually caught and as a result of their actions they were arrested and sent 54 miles to the Market Street in Chattanooga. It was there that they were forced to swear allegiance to the Union before being sent back home on foot.

An up close photograph of the Spring City Depot. 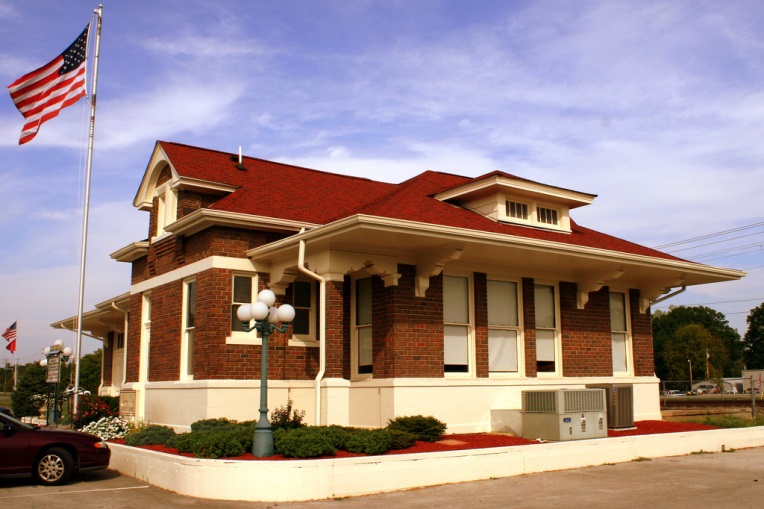 Steam Locomotion at the Depot around the mid -20th Century. 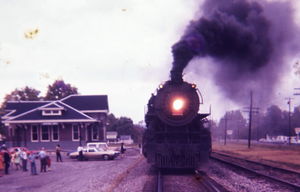 A photograph of the Spring City Depot, taken sometime around the end of the 19th Century or the early 20th Century. 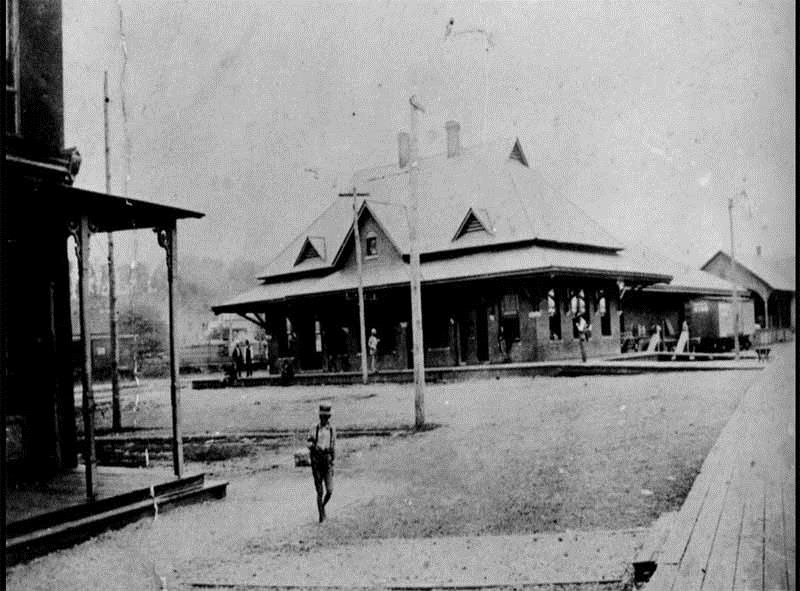 An information board that discusses the significance of the Rhea County Spartans. 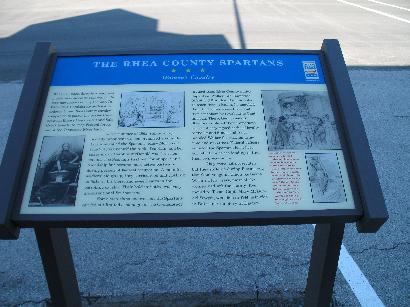 Rhea County where Spring City is situated within has a wealth of history that extends far back to the time of the Cherokee Nation’s dominance over the region. Originally settled by the Cherokee tribes of Natives Americans as well as sub-branch the Chickamauga tribe who broke off from the latter in the 1700s, the lands which they occupied were ceded by treaty and larger portions of land were also acquired by land grants from North Carolina. It was not until 1783 that the first whites settled in the area. Following Tennessee’s establishment as a state in 1796, the state’s boundaries were established according to the Tennessee constitution were situated at the Stone Mountain chains through the Appalachian mountains and all territory west of said mountains. In the year 1805, the Cherokee gave up claim to their land in cooperation with the Tellico Treaty which extended claim from the mouth of the Hiwassee River. In response to the relinquishment of this land by the natives, more white settlers began to move in that same year. After making settlement, these new inhabitants began the commission of Rhea County (originally called Roane County) with the house of member William Henry serving as the county courthouse until October 1812. The official establishment of Rhea County occurred on December 3rd, 1807 with the passage of the act of establishment. In the January of that following month the commissioners organized the county court with seven of its members serving as justices and each other member another position such as clerk, Sheriff, register, etc. Following the creation of Roane in 1807, the county underwent several changes in later years other than the change of name in 1815 to Rhea.

In the latter half of the earlier decades of the 19th century, the county of Rhea went through a series of boundary changes in which other countries emerged in the process which include Hamilton (1819), Bledsoe (1807) and Meigs (1836).The county selected the town of Washington as its’ initial county seat because of its’ thriving market place that boasted ten stores, several blacksmiths, several saddle and harness stores and three large cotton gins. In addition to the services offered by the town of Washington, the population of the county during the early decades of the 19th century boasted an ever increasing population which doubled at the beginning of every decade until 1836 with the founding of Meigs County and later Chattanooga County. By the year 1840, the population of the county had dropped to 3,985 from 8186 a year prior, however the county received 1,000 more residents by 1869. In wake of the drama that was the American Civil War, Rhea County was one of the few counties from East Tennessee that was sympathetic to the Confederate’s cause due to the political division present in Tennessee that came about in the years preceding the war.

With the outbreak of the Civil War, Confederate soldiers who served from Rhea and Meigs County were not motivated to enter the Confederacy to perpetuate slavery. Rather, they hoped to retain a balance of power within the government. During the course of the war itself, the people of Rhea County contributed greatly to the Confederate course with large numbers of troops from Rhea County or East Tennessee in general. “The ranks of Civil War volunteer companies were filled not only with friends and acquaintances but also with relatives. Fathers, sons, brothers, uncles, nephews and cousins all joined together in defense of the community and the family.”[1]In addition to providing soldiers to the Confederate course, Rhea County’s’   inhabitants also helped serve the Confederacy off the battlefield through supportive groups like the “Rhea County Spartans.” This group was a unit of female Confederates who carried out missions of sending out aid and supplies for the Confederate troops on the front line while they ventured into pro Union territories of the surrounding counties, carrying out missions of espionage and providing aid to their men, The group that became the Spartans was formed during a secret meeting between other groups of Confederate sympathizers at the local church. While they were not a group that was involved in the actual fighting, they were organized in a manner similar to the military where they had a chain of command comprised of both captains, lieutenants, sergeants and privates to counter the Union presence in the region since 1863. However, towards the final month of the Civil War in April 1865, the Spartans were captured and forced by the Unionist forces of Rhea County to march towards the Tennessee River and then board the train the USS Chattanooga to the town of the same name to be detained. However, after the officers realized that these women held no real threat they were released but before they were able to return to Rhea County, they were ordered to take an oath of allegiance to the United States government after which they returned home to Rhea County only on foot.

In the years that followed the American Civil War, Rhea County became indoctrinated into the growing industry of the railroad company during the mid-1880s when the Cincinnati Southern Railway was constructed along the west side of the Tennessee River, completely bypassed the country seat of Washington. As a result of the presence of the railroad, the town of Washington soon fell out of favor with the county and had begun to dwindle in size. In the other areas of the county where the railroads ventured, several towns and communities had begun to spring up as a result of its’ presence, one of which included the town of Spring City situated close to the Cincinnati Southern Railroad a few miles from the northern boundary. The territory that was to become the community of Spring City was originally the location of the famous haling waters Sulpher Springs later the Rhea’s springs in 1878. Situated on the bank of the Piney River, the springs were originally used as a “healing waters” resort for the residents. However with the passing of the railroad, the resort became a town that incorporated the use of the railroad for travel. Following its establishment, Spring City unlike most railroad towns continued to grow long after the 1930s as a result of the impact of both the nuclear steam plant and the Watts Dam. In the year of 1909, the Southern Railway had begun updating its facilities in Chattanooga by incorporating a massive southern railway terminal. Being the only community between the Chattanooga and Rockwood, the town built a small passenger depot as the railway was expanding farther into south for its citizens to access while making the trip towards the two cities. It was at Spring City that the Claiborn Calloway School a community center established for both African Americans and white Americans at the end of segregation was established in 1966.

In the years that followed the development of Spring City, the modern community that remains continued to function as a small American town that retains the railroads and the passenger depot as a museum for both visitors and residents and remind them of the historic past of both the town and county of Rhea as it offers information regarding the country’s most iconic figures, such as the “Rhea County Spartans.” The Spring City Depot is still situated on the platform as it has been since its connection with the southern railway and although it is small, it still holds an immense amount of importance to the people of Spring City and will continue to do so for generations to come.