Located in Jonesborough's oldest commercial building, the Chester Inn Museum chronicles the history of Jonesborough from the late 18th century to the present. William Chester built the inn in 1797, the same year that the city was established. Highlights of this local history museum inlcude exhibits related to the building's unique history, a diorama of Jonesborough in the 1850s, and an exhibit about the attempt to create the state of Franklin. The museum also includes special displays and events for children.

The state of Tennessee purchased the historic inn in 1989. After fundraising and restoration, it opened as a local history museum in 2011. 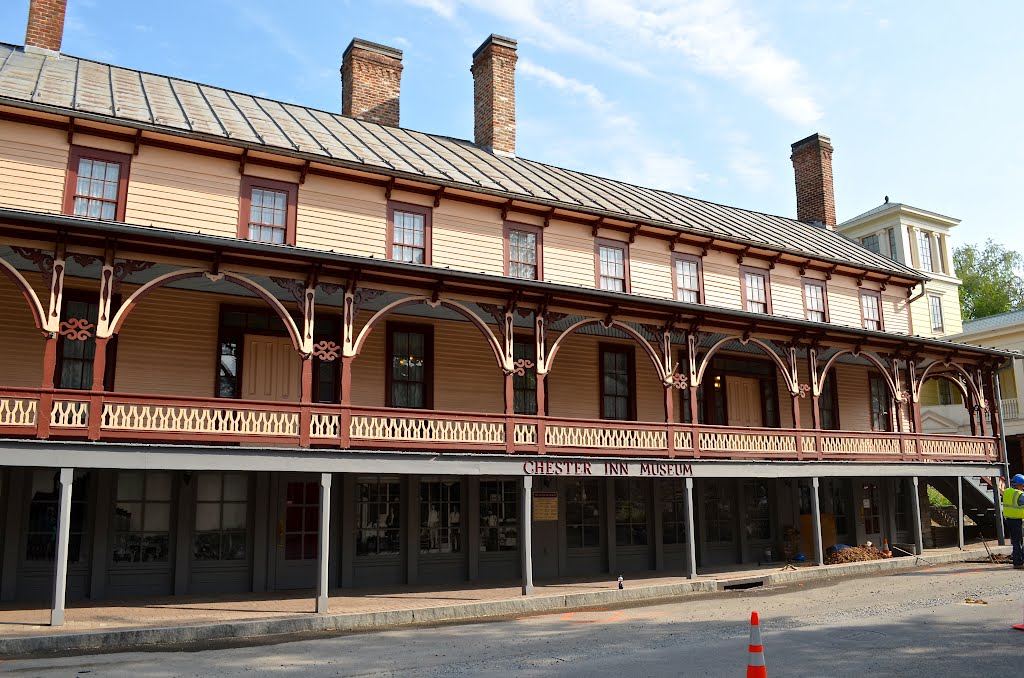 Exhibits center on the region's early history, with special exhibits about the attempt to create the State of Franklinm a diorama of the town as it appeared in the 1850s, and the experience of eastern Tennessee in the Civil War. 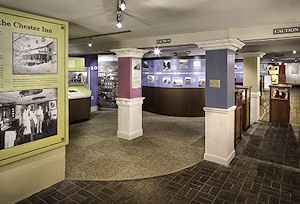 A photo of the Chester Inn Museum, taken present-day. 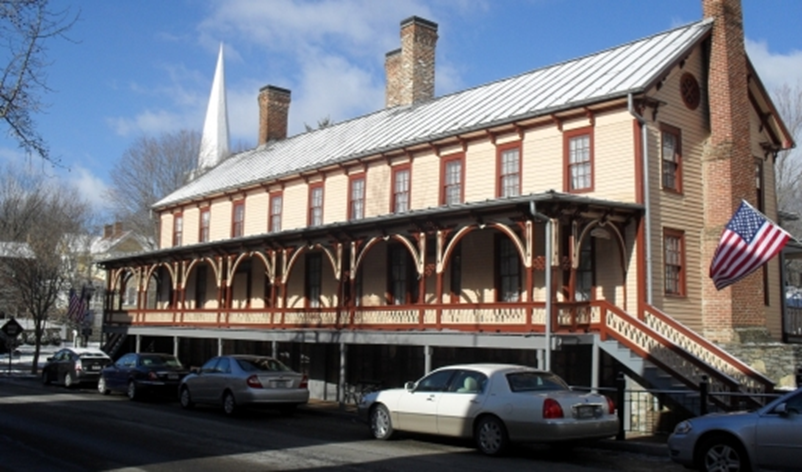 Picture of the Chester Inn Museum, during the days of US President Andrew Jackson. 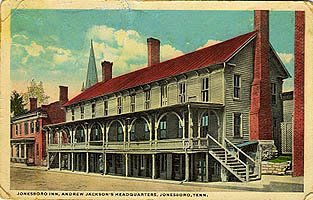 A picture of the Chester Inn taken some time in the 1940s. 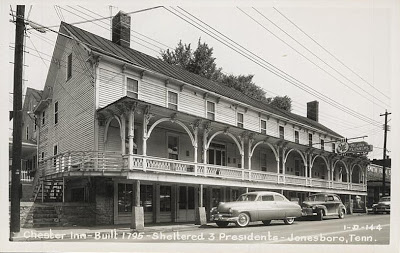 A View of historic downtown Jonesborough. 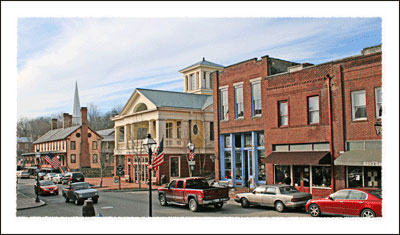 The International Storytelling Headquarters, serves as the site for the Annual Storytelling Festival held in Jonesborough every year at the beginning of August. 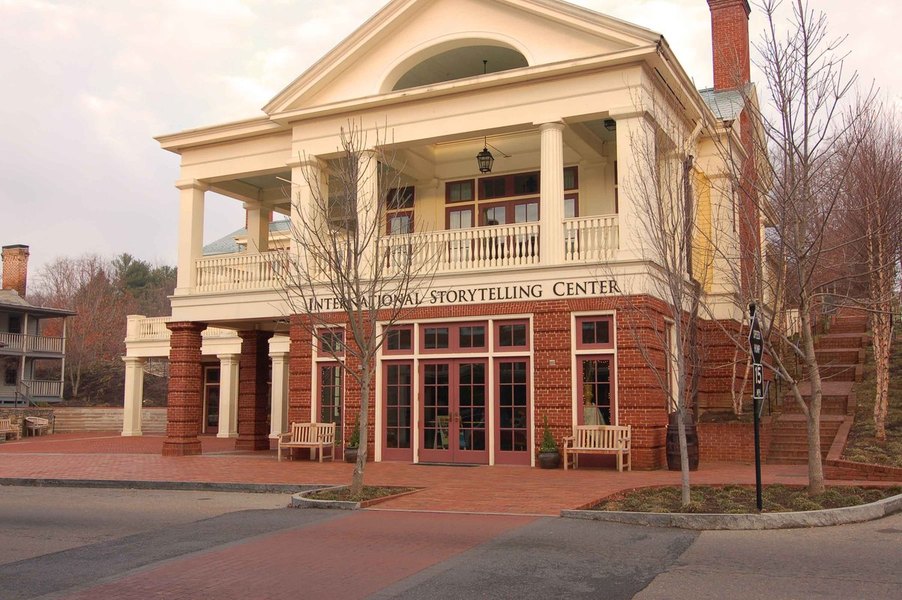 The area that would become Jonesborough predates the establishment of Tennessee. The earliest settlers were originally under the jurisdiction of North Carolina. The town was named in honor of North Carolina legislator Willie Jones because of his support of the state's expansion over the Appalachian Mountains. Considered the oldest town in Tennessee, Jonesborough contains a rich historical heritage. It was also one of the leading areas of operation for abolitionists during the area of slavery and an area that attracted significant Union support during the Civil War.

Today, Jonesborough is known for its role in the production of tobacco, as well as the home of the International Storytelling Festival.

Known as the oldest town in Tennessee, the town was like most of North Carolina’s territories originally part of the Cherokee Nation’s land. The Europeans first came into these lands following the confusion among people living on the Watauga and Nolichucky River about whether they were living within Virginia’s or North Carolina’s boundaries. To resolve this confusion plaguing their minds, they formed the Watauga Association dubbed “the first men of American birth” to establish free and independent communities on the continent. “The significance that this group held was that I gave this group the self-appointed ability to govern themselves successfully for several years, living on land which violated King George’s proclamation of October 7th 1763. As population along the region grew and the British’s power decreasing throughout the region, the people of both the Nolichucky and the Watauga Rivers purchased the entire territory that makes up the upper portions of the present state of Tennessee. In July of 1776, this new independent state sent out a petition to the provincial council of North Carolina to make this new district a part of North Carolina. “The humble petition of the inhabitants of Washington District…You may annex us to your providence…in such a manner as manner as may enable us to share in the glorious cause of liberty, etc.”[1]  Their request was granted and in the following year of 1777, North Carolina annexed the district and formed it into the County of Washington.

Following being joined up with North Carolina, the district’s first order of business was to designate and erect a site that would serve as the courthouse for the community. It was decided that the courthouse would be placed on Little Limestone Creek in between the Watauga and Nolichucky settlements. Following the solution to the location of the courthouse, the leaders of the district then sought to secure more land for settlement. To that end, they managed to secure a 600 land grant and sold the remaining 500 acres to James Allison in 1783 who gave one hundred acres back to the district. In the time that shortly followed these events, an Enabling Act was passed by the North Carolina assembly which designated the one hundred acres of land at the fixed point for the courthouse and other public buildings of Washington county would be made into a town. Those of the community opted to name the town “Jonesborough” in honor of patriot and statesman Willie Jones of Halifax, North Carolina who favored supporting the needs of the people of the west such as those from Washington district.

In the time which passed the creation of Jonesborough, the town began to grow in size and population as merchants soon began sprawling throughout the area. The town soon became known for its specialization in English manufactured goods as well as containing four to five respectable shops owned by tradesmen who have their goods from Richmond and Baltimore. While the town was beginning to prosper it was also during its’ initial beginning that Jonesborough tried to break the hundred acre tract, when the Tennessee Legislature passed an act that proposed to enlarge the town of Jonesborough in 1797. Although it has not been confirmed that this proposition was followed it is known that in 1848 the state legislature authorized the boundaries to extend to 75 acres. It was also during the final decade of the 18th century that Jonesborough began to establish a postal route from Abingdon to Knoxville or Jonesborough. On the 17th day of June 1796 Jonesborough established its first postal system to which the newspaper company, the Gazette urged the public to use this as a reason to continue to subscribe to their paper. As a result of the growing prosperity that emerged throughout Jonesborough and Washington County, the population doubled over the next four years and as a result by 1796 Tennessee was finally admitted to the Union as its’ sixteenth state. In the year that followed the establishment of Tennessee as a state, one of the most historic buildings, the Chester Inn was created. Established by Dr. William Chester as the “finest Inn on the Western Frontier.”[2] The Inn soon took many titles that included the Union Hotel, Bell Tavern, the Planter’s House and the Jonesborough Inn. The Inn had played host to several influential figures particularly politicians that have included US Presidents James K. Polk, Andrew Jackson as well as the first governor of Tennessee John Sevier. Although this single building was one of the first buildings established in Jonesborough, it would soon serve as a stepping stone for the change that awaited the town in the coming century.

Following Tennessee’s establishment as a state, Jonesborough continued to prosper as a town well into the 19th century. By the 1830s the town included a population of up to 500 inhabitants which included “eleven lawyers, four physicians, two clergymen, two churches, two academies, four schools, one printing office, four carpenters, three cabinet makers…and one mill.”[3]In addition to the amount of diverse citizens that inhabited Jonesborough, the town also boasted a male and female preparatory school with a total number of two hundred students, several churches for Presbyterians, Methodists or Baptist as well as a Masonic lodge. Several of the towns’ residents included several Democrats and Whigs which were made up of several of the most educated residents including doctors and lawyers that utilized two local taverns as their political bases to compete against each other with. Around the decade of the 1840s, Jonesborough experienced its’ biggest building boom. Specifically with the rapid growth of the population coupled with the rise in membership of the local church congregations led to a growing need for larger buildings to help accommodate these growing memberships. The several projects that emerged during this period would include the new congregations of the Presbyterian, Methodist and Baptist ministries as well as a new jail in 1839, a new courthouse in 1846 and by 1849 Jonesborough was able to boast a lot of public buildings as was any other town in East Tennessee.

Following the advancements made to Jonesborough during the final decades of the post-bellum era, the events which would play out helped further shape the town in more ways than one. Specifically, during the course of the war, hundreds of men from Washington County were drafted into the armies of both the Union and Confederacy. While Tennessee was eventually part of the Confederacy following 1861, East Tennessee contained a bit of a division between its’ own citizens who did not sympathize with the Confederates’ cause. To be specific, despite containing a large slave population, the economy of the region of East Tennessee did not need such a large population because of the lack of large plantations. Furthermore, the residents did not need slaves because they produced items purely for their consumption. As a result o the absence of a majority of the male population in Jonesborough, several of the local businesses slumped to a very low figure as a result of the lack of men but also because of the inability to obtain most manufactured goods from the north. To make matters worse, pries for products began to go up as food, shoes and clothing was being sent to the army. It was also during the years prior to and during the Civil War that Jonesborough became the center of abolitionist activity in the south. Specifically, it served as the birthplace of the Emancipator written by Elihu Embree in 1820. Although the Emancipator only lasted for duration of an entire year until Mr. Embree’s death in December of that year, these papers would serve a much more profound purpose as the country’s first anti-slavery paper. It was also during the course of the American Civil War that the town of Jonesborough also served as a source of salt for the Confederacy. This came about in January 1864 when the county purchased $4500 worth of salt and appointed Jonesborough as the place to store its supply.

In the timeframe that followed the Civil War, Jonesborough maintained a low profile. However, while it soon faded into the American conscious, Jonesborough is still considered to be held in such high regards throughout Tennessee. This can be said, because it still remains as the county seat for Washington County, as well as the first and oldest town in Tennessee. Interestingly enough, the town is known as the storytelling capital of the world as it annually holds the National Storytelling Festival on the first full week of October. In addition to its’ attraction to storytelling, the town also holds a legend that the ghost of President Andrew Jackson haunts his old residence the Christopher Taylor House located a mile outside of town. Furthermore, the town of Jonesborough is situated close to the birthplace of Davy Crockett as well as the location where Daniel Boone negotiated the purchase of the large tract of land that was to become a portion of both Kentucky and Tennessee overall. While Jonesborough may not still be as well-known as some of the other cities of Tennessee, it continues to hold a large amount of importance to both Washington County as well as the state of Tennessee.