The Museum Education Center (MEC) building was initially built as the Erickson Alumni Center. Erected between 1984 and 1986, the structure was designed by famous architect Michael Graves to house the WVU Alumni Center Association. When the new Erickson Alumni Center was completed in 2008, the old Erickson Alumni Center building was repurposed as the MEC for the Art Museum of WVU. The MEC and museum are now attached. The MEC’s physical structure has changed relatively little since being built and remains one of Morgantown’s most unique architectural works. In addition to its educational aspects, it is home to administrative functions of the Museum and has a grand hall and patio which host frequent university and private events.

The Patteson Dr facing facade of the Museum Education Center 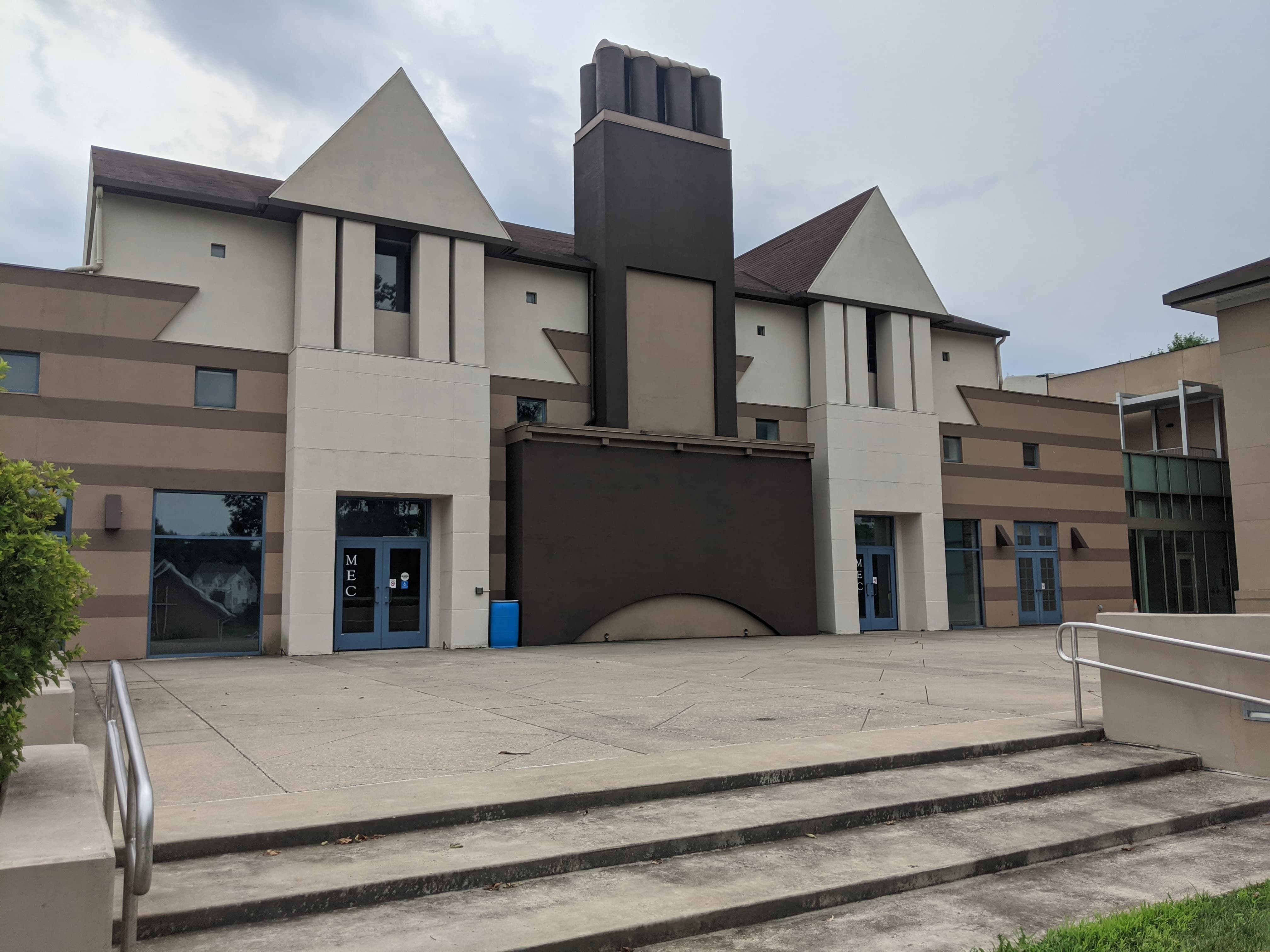 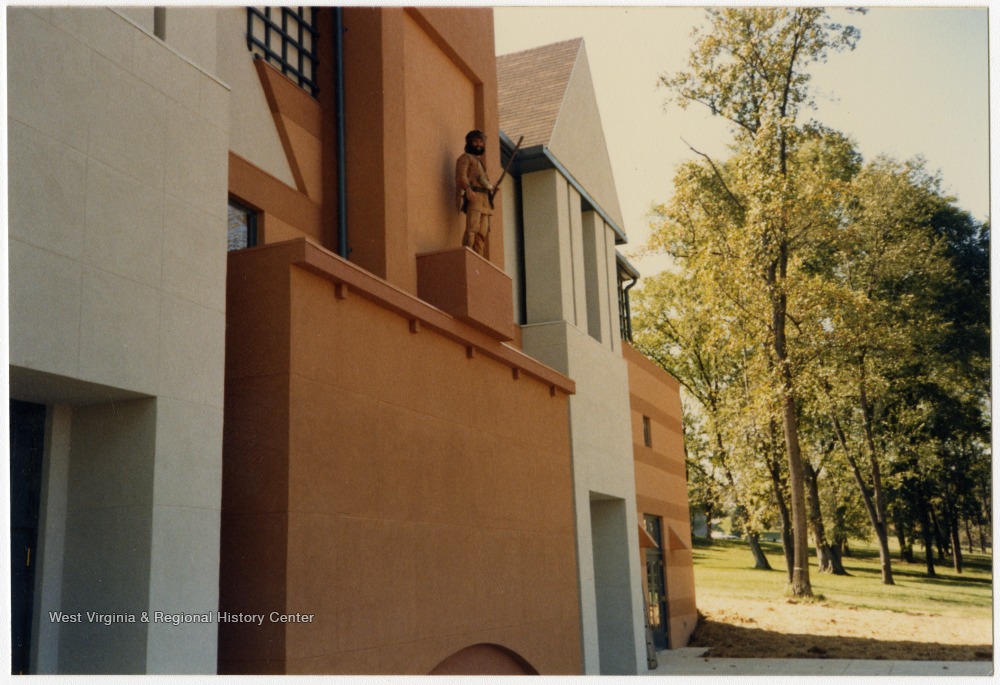 Entrance to the Museum Education Center 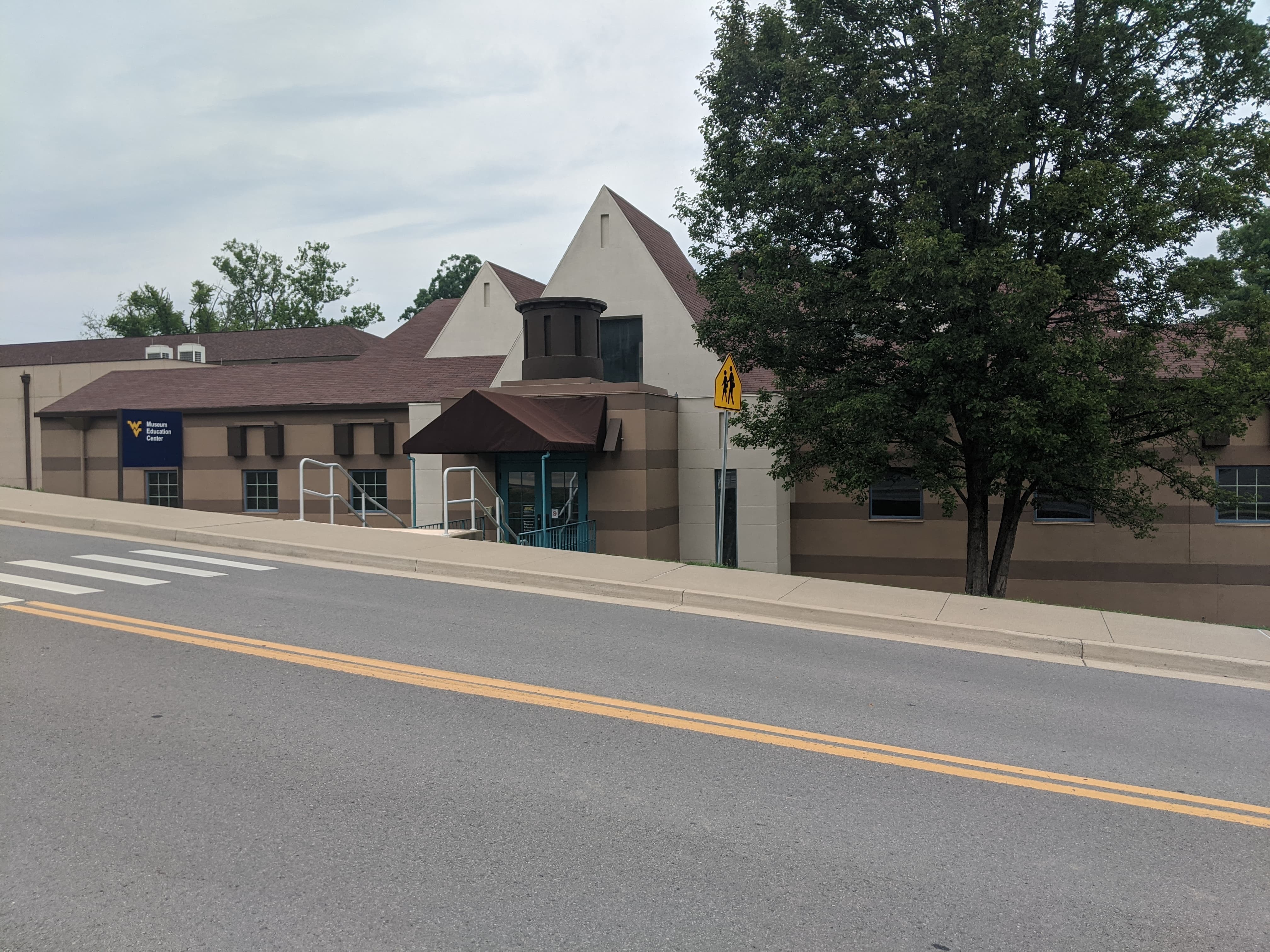 Built between 1984 and 1986, the Museum Education Center (MEC) was built to serve as the original Erickson Alumni Center. It contained offices for employees of the WVU Alumni Center Association and served as an event space for alumni functions. The building can be roughly bisected lengthwise. The half of the building near the entrance contains offices and conference rooms on both floors. The other half of the building is occupied by a grand hall space that encompasses both floors and connects to the outdoor patio. The building served as the Erickson Alumni Center until 2008, when the building that currently houses the center was completed just down the road on Patteson Drive.

The completion of the new Erickson Alumni Center building was serendipitously timed. WVU decided to erect the newly approved Art Museum of WVU attached to the original – and at that point vacant – alumni center. The original alumni center building was converted into the Museum Education Center. In many ways, the Museum Education Center has remained true to its original functions. The offices now house museum staff instead of alumni association staff, and the grand hall now hosts workshops, lectures, performances, private events, and other functions in addition to alumni events. The building remains a vibrant and varied hub of university activity.

The MEC is the only building in West Virginia to be designed by internationally renowned architect Michael Graves (1934-2015). Known for his revolutionary expansion of architecture to be postmodern rather than simply modern, Graves drafted blueprints for hundreds of buildings around the world. For these creations he was awarded the American Institute of Architects highest award, the AIA Gold Medal. Despite Graves’ prowess as an architect, he is likely most familiar to the average person through his commercial designs. He was commissioned to design housewares and furniture by companies such as Target, J.C. Penny, and Disney.

The MEC is built of unassuming materials; wooden frames, steel joints, and concrete floors. The building is characterized by simple geometric shapes and neutral earthy colors – though WVU’s school colors of gold and blue appear throughout the palette as accents. Some small changes have been made to the building since its creation. Previously open-air windows have had panes added to conform to fire code. Some of the arches on the colonnade that borders the grand hall have been walled. Finally, a cloister between the Art Museum of WVU and the MEC was added in a back corner of the grand hall.

There is, perhaps, no more appropriate architect for an alumni center than Graves. His architectural philosophy is one that attempts to embody the future while honoring the past. This is easily seen in the eclectic mix of ancient Greek and Roman forms with modern country estate features. The columns, simple geometric forms, and the patterning and coloring of the exterior walls all refer to classical architecture. Meanwhile, the site was chosen to convey a more modern estate feel. Although, ironically, many of the trees on the site have been cut down, the land was once wooded with trees that shielded the building from the immediate bustle of Patteson Drive. A comfortable lodge feeling is also suggested by the overlarge fireplace and chimney, exterior trellises, and vaulted wooden ceiling in the grand hall. Graves’ postmodern mission to deconstruct previous styles, pilfer through the fragments for useful parts, and then create a new style certainly finds success in the Museum Education Center.