A cabin built in 1861 that was the site of a bloody standoff between Union forces and a small number of deserters from federal ranks during the latter stages of the Civil War. Led by Captain Southworth, the Union troops were tipped off on the location of the deserters. On December 13th, 1864 CO.C16th the VRC( Veterans Reserve Corp) of the Union Army surrounded the cabin and ordered the surrender of the deserters taking refugee inside. After trying to negotiate with the inhabitants the situation took a turn for the worst when one of the deserters shot and killed federal soldier Edgar Reed from New Hampshire. Following up Reed's murder, the Union retaliated with their own shots and killed Adams in his own yard. Following up the death of Adams, eighteen men were arrested that night and within a month 150 more were incarcerated.

A general view of the Knox Cabin taken present-day. 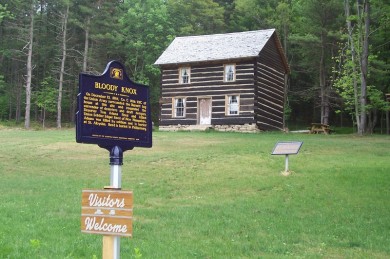 A more close-up view of the Knox Cabin, taken present-day. 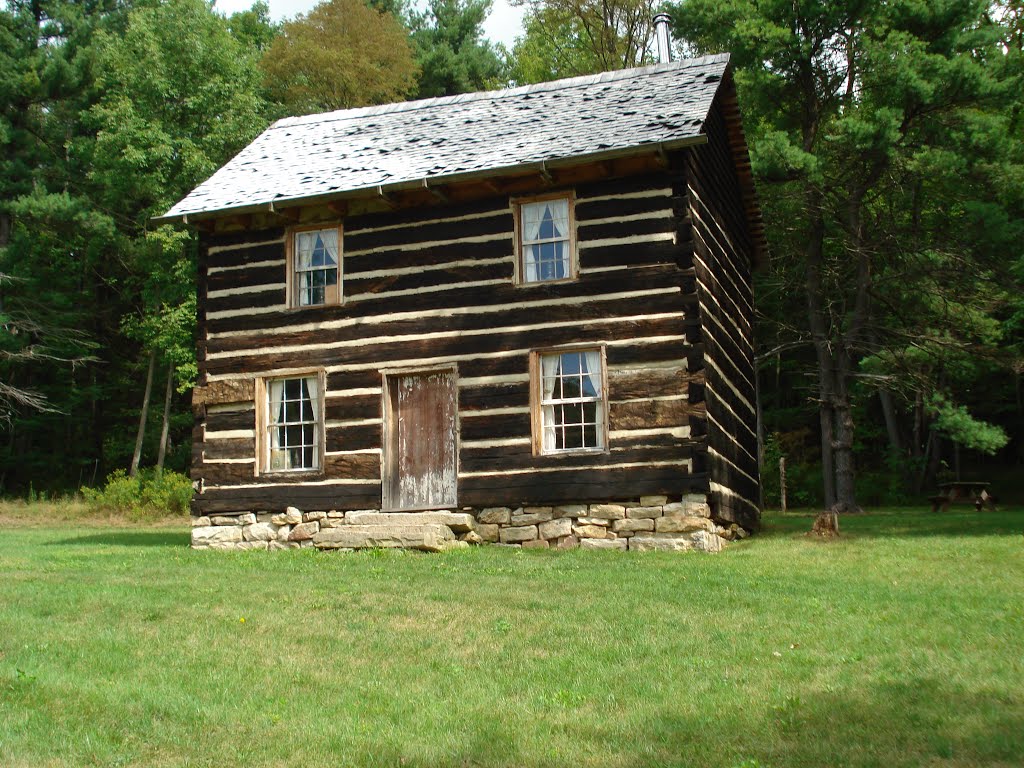 A photo of a reenactment hosted at the site. 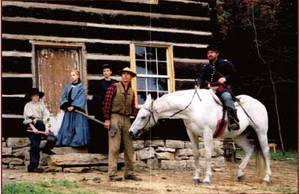 In the short time span that the United States has recorded its history, there have been several episodes of violent confrontations that involved the intervention of federal militias. To be specific, bloody confrontations that was followed by death for those involved. Whether it was a massacre or a simple misunderstanding. The events that unfolded in Clearfield Pennsylvania at the now infamous cabin called “Bloody Knox” formally Knox Cabin, was no exception. Despite this being small incident  it was followed by the use of Federal troops to intervene, as well as the death of both a federal soldier and the leader of a group of the fugitive deserters from the Union army during the latter portion of the American Civil War. While this event ended with the death of both a federal soldier and the architect of the deserters, it also led to the capture and incarceration of 150 men who deserted.

The story of Knox Cabin began following the divide that emerged during the Civil War. Because of the split in politics following the secession of the southern United States  there was a great divide among northerners as to answer the call to defend the unity of the American people. The events in Clearfield Pennsylvania was not just one of these occurrences where there was a majority of Americans who deserted from the call to arms. In order to fill up the ranks of the Union forces as the result of the divisions and growing rate of desertion several politicians began to conscript the rising number of immigrants into the military. In order to accomplish this task the military set up recruiting officers at the docks of every major port city still within the Union’s boundaries. “Historians estimate that some 800,000 immigrants poured into the north…This provided a consistent and replenishable source of recruits.”[1] While the Union recruited all immigrants who came to America, a large majority of immigrants that were conscripted were of Irish decent that went on to fight in the northern regiments who were promised immediate citizenship for their service.

While a large portion of the Union’s regiments were comprised of immigrants to provide them with more manpower, another strategy utilized by the Union states forces to conscript more soldiers was through lump-sum payments. To be specific, states began to offer bounties that ranged from $25 to $50 to get men to enlist. While this idea may have worked to a certain degree, as the war raged on and casualties began to increase, many wanted an increase in bounty payments in order to compensate each soldier thoroughly for the risks they would be taking. As a result of this growing demand for compensation, there were soldiers who were offered bounties that went as low as three hundred dollars and as high as a thousand dollars that amounted to a payment that would regularly take most Americans years to earn up. The real downside to the payments offered was that because each bounty varied, those who were offered said payments would begin holding out for a higher bid which in the process created a bidding war for potential volunteers. Even worse than holding out for more payments was that a few soldiers deserted one regiment and enlisted into another to get even more payments to their credit to which they earned the nickname of “Bounty Jumpers.”

While these two methods utilized by the Union were effective in bringing together a large number of people into Confederate ranks, they were met with several flaws in their plans, specifically in terms of how they operated. In terms of utilizing newly arrived immigrants to America as soldiers, the recruiting officers had to deal with substitute brokers who were looking to recruit replacements for drafted men at a lower cost. Because immigrants had little to no cash prior to coming on American soil they became a favorable target for these brokers to the extreme where they kidnapped immigrants whether on the docks or on the boats themselves. “At times when the monetary offering did not produce the desired results, men would be kidnapped right off the boats and offered to enrolling officers”[2]Many northerners saw the desire for conscription as an attack against those of the lower cast of society. “ A large portion of the working class had saw the war as a fight that would only benefit the wealthy…They viewed the Conscription Act to be an Unconstitutional measure that ‘tyrannized the poor’ and ‘favored the rich.” [3]

In response to the corrupt methods of the Conscription Act, Americans met these methods of forced conscription with resistance and evasion. This turn of events led to the violent disturbances in New York City by the working class majority against the government’s policies called the New York City Draft Riots. Also known as Draft Week to Americans at the time, this event took place in July of 1863 from the 13th to the 16th. While the protests were geared towards resistance for the draft, they eventually escalated to even more brutal levels when they began attacking bystanders particularly African Americans on the spot. In response to this, the police dispatched sixty officers to quell the rioters ; however since the telegraph lines had been cut they were unaware of the number of protesters involved and ere therefore no match for the thousands of angry protesters. In response, Thomas Acton head of the Board of Police Commissioners along with Mayor Opdyke of New York sent out more forces which included 300 government troops and a few companies of Marines, sailors and police officers. During the next few days, the riots had grown in numbers of participants and volume as a majority of the east side was consumed by the rioters. It was not until the arrival of the 7th New York infantry that the riots finally came to an end. While the protests were a brutal incident that put the death toll in between 1,000-1,200 people, it was just by those who refused to adhere to the conscription acts.

In regards to resistance towards the Conscription Acts, Pennsylvania became known for the violence that occurred in response to these rebellions. This resistance towards conscription had in Pennsylvania since the war’s conception at Fort Sumter but in a more peaceable form in which a group of conscripted men brought a suit against the local draft board. The suit stated that the Conscription Acts was unconstitutional due to it’s infringement on a state’s reserve power by making militiamen subject to the draft. This suit won and for a period of time the draft was suspended throughout Pennsylvania, however the federal government ignored this ruling and resumed the draft. In response, the resistance shifted in Pennsylvania to more violent responses upon big figures, many openly defied the conscription through deserting from their ranks such as that of an individual by the name of Tom Adams. A former soldier for the Union forces, Adams along with a large group of draft dodgers began to embark on a series of raids throughout  the region in which the created a climate of fear, intimidation and committed murder. In one of their infamous raids these same deserters shot Marshal David Carhcart and recruitment officer Col. Cyrus Butler, which in response the government began to strike back.

To counter the raid of Adams and his gang, the government decided to act in a decisive manner. To that end, they sent a small contingency of troops into the region of the gangs operation in the Knox Township of Clearfield country in Central Pennsylvania. Upon arrival, this small group was informed by locals that Adams was planning a dance on the evening of December 13th  and would involve dancing and drinking. Around the hour of two, the Union forces had approached the location of Adams home, a small cabin and began to surround the house which was presented as an easy challenge to the Union forces due to both the lack of a lookout post for the deserters and from the residents’ pure negligence. After the entire house was surrounded by Union forces, Captain John M Soutwarth the leader of this battalion rushed with a small number of remaining troops that arrived through the front door. Because this incursion the residents were caught completely off guard and surrendered immediately without a fight. However Tom Adams immediately rushed upstairs and began to fire at the surrounding forces with his rifle from an upper window.  Following the first three shots that Adams fired, they fatally hit a Union soldier named Edgar Reed. Following the attack on Reed, Adams tried to escape by kicking a hole in the wall boards of his home’s second story gable then jumped on to the roof of a nearby out building and attempted to escape on foot. The Union forces called out to Adams to surrender, but their calls were answered on deaf ears as Adams kept running until he was shot after making only fifteen yards of distance between him and the pursuing forces. After the delivery of this fatal blow, Adams made one final attempt to escape, only to fall again and die within twenty minutes of his wounds.

In the aftermath of the incident at Adam’s Cabin in the Knox Township of Clearfield County, Pennsylvania, the deserters involved with Adams were arrested and indicted. Despite the end of violence brought on by Adams and his gang, there still continued an ongoing resistance within Pennsylvania due to the continued use of conscription into the Union forces. The raid on Adam’s Cabin therefore caused widespread federal intervention in the lumber region. News of the raid spread fast throughout the region where large numbers of deserters and draft evaders resided in seclude cabins in search for work and protection from the law. These groups were later arrested by Federal troops when these troops raided local homes at night. The actions carried out by the government with these raids, create a feeling that the United States was becoming more of a military dictatorship that is threatening the Civil Rights of the American people. Although the episode that occurred at “Bloody” Knox Cabin has long since passed, it’s structure still stands as a reminder to the defiance that arose as a result of the corruptive system that was present at the time within the Union despite its’ projected image as the protagonists of this turbulent chapter in American history.

[1] Did Lincoln and the Republican Party Create the Civil War, Robert Broadwater, pg.132.