A restored village located close to the Ohio and Erie Canal. The town itself became an important representation in promoting the way of life for those who lived along the Ohio and Erie Canal during the mid nineteenth century. Nowadays the town boats a large variety of individual shops and restaurants that have been privately owned since 2005. Furthermore, the village is also the location of the Walhonding Canal that helped in connecting the town of Cavalla in the northeastern side of the county with the Ohio and Erie Canal.

A modern photo of the welcome sign to the Roscoe Village. 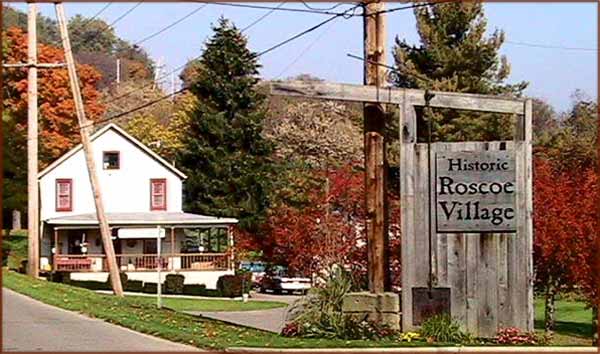 A photo taken of one of the stores inhabiting the village. 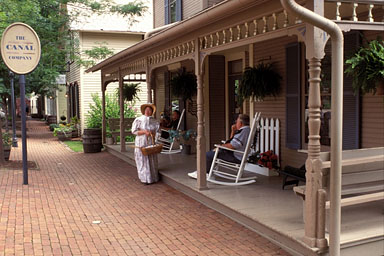 An image of the community of the Roscoe Village. 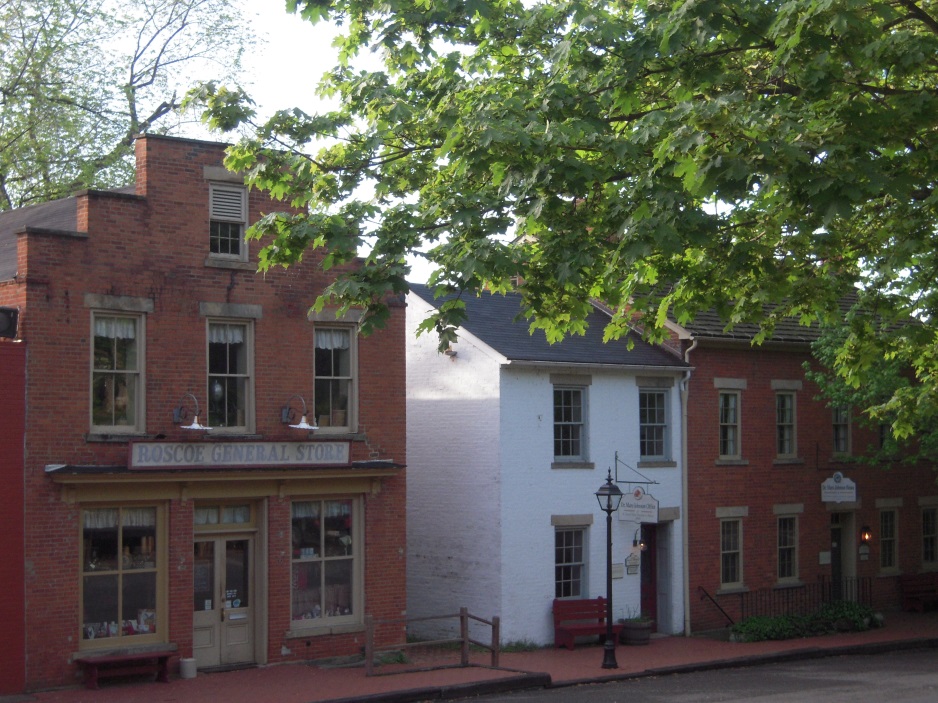 Throughout the history of the United States there are several historical sites that retell the story of a time long since passed in the American mindset which played a part in American history. While some of these sites may exhibit a significance in a more general understanding, some may hold in more importance to a timeline because if the manner in which the functioned as a culture. One of these sites that held a large amount of significance because of how they functioned during a specific time was the Historical Roscoe Village of Coshocton Ohio. To be specific, because the village located near both the Erie and Ohio Canal, the town was highly regarded for its representation of life for Americans who lived along the two canals during the mid-19th century. While the town now serves as a historic visitors center, it still retains the elements of the 19th century to keep its’ memory alive in the American conscious ever since.

While Roscoe holds an abundance of historical significance, it is the surrounding community of Coshocton, Ohio that cultivated its beginnings and rise to prominence. Formally a part of the appropriated in the 1798, the county of Coshocton was originally territory to the Iroquois Nation after the white settlers moved them from their original settlements in Delaware following the French and Indian War. It was during this period of time that the natives became middlemen in the North American Fur Trade  of the late 1770s. The native town that would eventually become Coshocton became the principal town in the Lenape Tribe. Founded by Chief Newcomer after he moved his people from their old settlement in Ohio. Newcomer’s town or Coshocton as it was named, in retrospect had a half a dozen Indian Villages gathered along the riverside of the Delaware River. During their initial time spent in Coshocton, the natives traded with both the English and the French settlers who provided them with beads, blankets, hatchets, knives and other goods for survival in exchange for fur obtained from the native’s hunts for beavers. However, when they traded with both the French and English there soon emerged a serious competition between the English and their French counterparts for more control of the fur trade itself.

Following the growing competition between the French and English settlements of the Fur Trade, the French threatened the natives that they would lose their interest in protecting them should the natives continue to trade with the English. The English then counteracted this threat from the French when they sent English officer George Cragham to the native’s territory where he exerted personal influence over the natives and eventually won their confidences through this carefree personality. On December 1750 the English Surveyor and Graham’s superior Christopher Gist arrived in Coshocton. Representing the newly formed Ohio Company Gist came forward with a grant from the king of England who from a deed made with the cooperation of several Iroquois Chiefs from Virginia, Pennsylvania and Maryland that gave claim to all the land beyond the mountains. Because of Gist and the Ohio Company’s strive to obtain the native’s lands their efforts angered the French to a large degree where they began taking English traders prisoner and sending them up to Canada. To be incarcerated.

In the years that followed the drama of the latter half of the eighteenth century, it was not until the year 1799 that the first European began to settle in the former native territory that is modern Coshocton, Ohio. Charley Williams settled in the region for up to thirty two-years, he wrote down his experiences and ideas for the future. Soon afterwards, other settlers had begun to settle in the area once word got out that Louis Philippe a noble from France had pnce settled in the area. While this factor is still open for debate, it is known that Philippe did sail from New York for England at some point prior to1800. Furthermore, following his supposed visit, public entertainment centers and Inns had begun to appear every few miles. One of the most influential buildings in the town was a bar named “King Charley’s” Tavern  that served as the social and political center of the town. It was not until April 1st 1811 that Coshocton became a county organized by the legislature. Following its’ establishment as a county, the name of Coshocton derived from the word of the native tongue meaning “black bear town.” While the establishment of the county drew in a large number of people, it was not until the introduction of the Erie and Ohio Canal that settlements began to spread throughout the region.

After the completion of the Erie Canal in October 26 1825, the canal mania began to take hold in the United States as a result of its success. To be specific, the canal connected the American territories of the west to New York’s waterfront. As well as shipping convenience, the canal financially brought vast revenue to New York in general such as the new industry of tourist travel with packet boats to locations such as Niagara Falls. This fervor for a canal system to be implanted came about as a result of the vision by the states of Maryland and Virginia to develop because a canal provided access for ships to reach the territories situated in the Ohio Valley through the Potomac River Valley. To accomplish this task, construction and planning of the canal required the talents of an entire army of engineers that had previously worked on other canal projects including the Delaware, Hudson etc. This team of engineers would include names such as Benjamin Wright, Nathan Roberts, Canvass White, John Jervis, and James Geddes. Throughout the course of construction of this canal the work was slow with high costs and furthermore it required many more men to help complete the project which was more than what their casual laborers, slaves or indentured servants could provide. To counter this small number of workers helping with the canal project, labor contractors immediately utilized the assistance of immigrants particularly the Irish to help with this lack of skilled hands. Furthermore, the Irish performed tasks such as escalating and blasting dirt and rack, shaping the prism with clay and overall cleared the line of the Canal. Other skilled nationalities were utilized such as welsh miners and Scottish Masons to help with the Canal’s construction by building aqueducts and tunnels. In the area of the economics that went into the canals development, a range of $10,000 to $20,000 as the cost per mile which the canal had taken up between its construction from 1825 to 1835. To make matters worse, the construction of the canal also coincided with a period of corruption, graft corruption, bribery and fraud behind the scenes between the state legislatures.

Following its completion, the new canal system would lead to the growth of new towns and communities along its’ boundaries. In the y the opening of the Ohio-Erie Canal on July 4th, 1825, several communities emerged throughout its boundaries. Specifically, because the canal served as the primary means for commercial transport in Ohio prior to the creation of the railroads. For a period of twelve years, the canal contained heavy traffic that at its peak it’s eastern end received up to $432,711 as its Western end received $ 351,893 in tolls that amounted to a total $784,604.With the opening of the canal, the community transformed the community of Roscoe into one of the largest wheat shipping parts along the canal’s lines. In addition to its’ part as a town that exemplified life along the Ohio-Erie Canal, the Roscoe Village also became well known as a place for fugitive slaves to have been brought  en route on their journey towards the north. Containing dozens of homes that served as safe houses for fugitive slaves that included names of prominent characters such as Dr. James Clifford Grimes. PhD, former slave owner William McClain and tavern owner Andrew Creter.  Despite the prominence of the Ohio-Erie Canal as a means of transport for large amount of goods through the state of Ohio, with the coming of the great flood in the year 1913 from March 23rd to March 26th. This came about as a result of the heavy rain that had spilled water over from the canal’s reservoirs which spilled over into the canal destroying the aqueducts as well as damaging a majority of the locks. In addition to the damage caused by the flood, with the creation of the railroad system in the United States caused the canal way system to fall out of favor as a means to transport a large amount of goods throughout the United States.

With the growing popularity of the railway system as a means to transport a large quantity of good across the United States, the use of the canal systems throughout the United States fell out of favor. Along with the faded interest in the use of the canal ways, the  town of Roscoe itself faded into memory of the American memory as a town that represented a timeframe when Americans still utilized the canals to bring prosperity to the surrounding communities that existed along its borders. Nowadays, the town serves as a tourist attraction that boasts several shops, restaurants while at the same time offers many tours, festivals and weddings to help celebrate the legacy of the town and canal system in America. Despite its fade from the more mainstream topics of focus in the period that took place, the Roscoe village still remains as a reminder to the American mindset as a historic community that became a vital trading port along the Ohio-Erie canal that helped distribute supplies needed to continue the growth of the American people who lived farther into the mainland of the United States and lacked the ability to reach the abundant markets in cities that lived closer to the shorelines.