The City of Las Vegas Museum engages visitors in the rich history of Las Vegas, New Mexico and the region's unique heritage. The museum offers several collections and exhibits that represent the area's history. One of the most notable collections is the Rough Rider Memorial Collection that commemorates the Rough Riders. Recruited by Colonel Theodore Roosevelt in 1898, the Rough Riders were a branch of the United States' First Volunteer Calvary. Composed of miners, cowboys, and farmers, the Rough Riders were highly involved with the Spanish-American War. The United States declared war against Spain after the sinking of the USS Maine at the harbor of Havana, Cuba. The Rough Riders participated in numerous battles in Cuba, such as the Battle of Santiago, the Battle at San Juan Hill, the Battle of Las Guasiamas, and the capture of Kettle Hill. The Rough Rider Memorial Collection includes newspaper clippings about the Rough Riders and the Spanish-American War, agriculture equipment, war uniforms, photographs, and municipal and business documents. 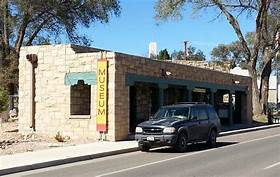 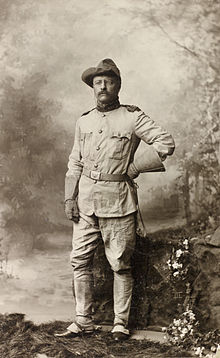 The Rough Riders' Cry at the Battle of Santiago 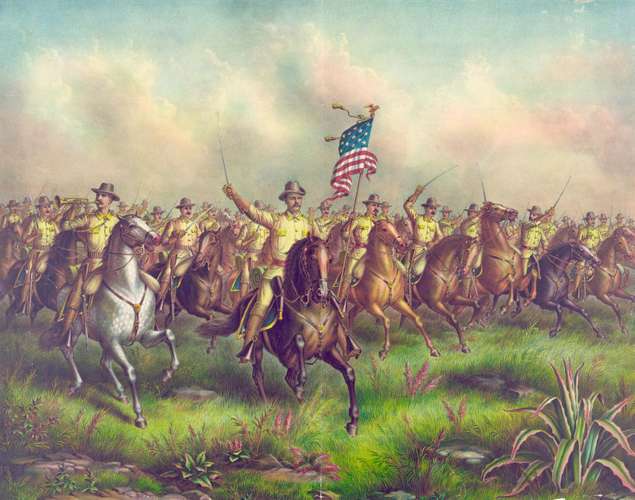 The United Guard: The Rough Riders 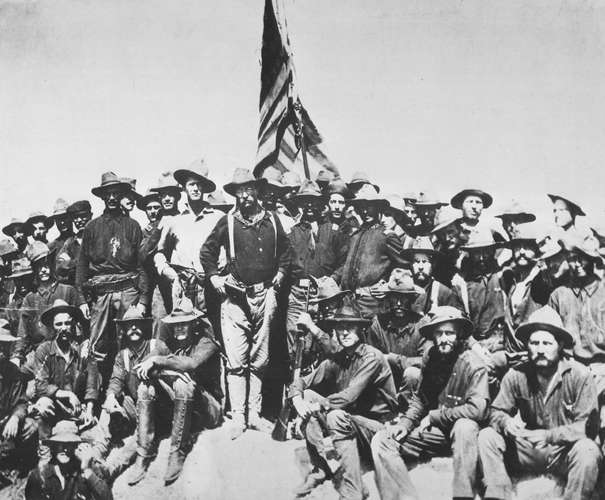 Before he was elected as the 26th president of the United States, Theodore Roosevelt was elected by President William McKinley as the Assistant Secretary of the Navy in 1879. The next year, McKinley declared war against Spain in response to the explosion of the armored cruiser, USS Maine in the harbor of Havana, Cuba. Under McKinley's orders, the cruiser was sent to Cuba to help the country who was trying to win their independence from Spain. Roosevelt and other political figures blamed Spain for the explosion. After trying to find a peaceful compromise to the end the tension between the United States and Spain, McKinley declared war against Spain in 1898; this was the start of the Spanish-American War.

Once the war began, Roosevelt resigned from his position ad the Assistant Secretary of the Navy. Alongside Colonel Leonard Wood, Roosevelt formed the Rough Riders, which was a branch of the United States' First Volunteer Calvary. Roosevelt was the leader and recruiter of the calvary while Wood trained thee volunteer soldiers. Originally, Roosevelt was just recruiting men from the Native American Territory, New Mexico, Arizona, and Oklahoma, but word of the cavalry spread quickly, and men from all around the United States. The calvary compromised of cowboys, farmers, miners, Native Americans, law-enforcement officials. Even college athletes and glee club singers from Ivy League colleges joined the Rough Riders. Wood and Roosevelt prepared the Rough Riders so well that they were invited to join the U.S. army and navy to fight in the war. They were one of few cavalries at the time to achieve such an honor.

During the war, the calvary gained major attention from the United States press due to their colorful and unorthodox exploits during the war. The war took place in Cuba, and The Rough Riders participated in several battles, such as the Battle of Santiago, the Battle at San Juan Hill, the Battle of Las Guasiamas, and the capture of Kettle Hill. By December 1898, the war ended with the Treaty of Paris, and Spain renounced their control of Cuba to the United States. In addition, Spain gave the United States sovereignty of the Philippines in exchange for $20 million. The war impacted both parties with Spain focusing less on oversea colonization and more on the country's domestic issues, such as economy and agriculture. The United States gained became more involved with international politics and worldly affairs.

Before the building became the City of Las Vegas New Mexico Museum, it was referred as the Las Vegas Municipal Building, and it was constructed between the late 1930s to the early 1940s as a Works Progress Administration (WPA) project. As state agencies grew to comply with Franklin D. Roosevelt's New Deal program requirements, Las Vegas, New Mexico needed more office space. The building became apparent to civic leaders that Las Vegas required a new public building. In the spring of 1938, voters passed five bond issues for the construction of the Last Vegas Municipal Building as an office building. Later, the building was converted into the City of Las Vegas New Mexico Museum.

The museum offers various exhibits and collections that engage visitors in the rich history of Las Vegas, New Mexico and the region's unique heritage. The most notable collection is the Rough Rider Memorial Collection where over 7,000 pieces of Rough Riders' memorabilia is on display to commemorate the cavalries' contributions during the Spanish-American War. The collection includes Rough Rider soldier uniforms, photographs, municipal and business documents, newspaper clippings about the Rough Riders and the Spanish-American War, maps, and agricultural equipment. The museum offers free admission, and their mission statement is to collect, preserve, and present objects and themes relating to the region's heritage in order for the public to understand the link between past, present, and future.