Also known as Highland Light, this is one of the oldest lighthouse sites on the Atlantic shore and the oldest operating lighthouse in the area. The lighthouse is open for tours during the season. The nearby Highland Museum has an excellent collection of maritime and local history artifacts and exhibits. In 1996, to escape the eroding cliffs, the lighthouse was moved about 400 feet inland to its present location. 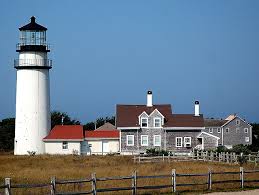 Established in 1797 as the 20th light station in the United States, the original 45-foot tall wooden tower and keeper's dwelling were built more than 500 feet from the edge of a 125-foot-tall clay cliff. A new brick lighthouse was erected near the original tower in 1831. The present 66-foot-tall brick light tower, keeper's house, and generator shed replaced the previous structures in 1857. An enclosed walkway connects the tower and the one-and-one-half-story, L-shaped, Queen-Anne-style keeper's dwelling.

Erosion of the steep cliff throughout the years brought the present light station around 100 feet from the cliff's edge by the early 1990s. Using funds raised by the Truro Historical Society combined with state and Federal grants, Highland Light Station was successfully moved 450 feet back to safer ground. After the 18-day move, the light was relit on November 3, 1996, and is an active aid to navigation. Today, the keeper's house features a gift shop and museum exhibits and a dedicated staff provides tours of the tower.