The bank Chairman’s Office in the southwest corner of Kirk Hall features Peruvian mahogany walls and a marble fireplace. A reproduction of a self-portrait by Missouri artist George Caleb Bingham hangs over the fireplace (the Library-owned original is on display at the Nelson-Atkins Museum of Art). Another Bingham work, General Order No. 11, is displayed behind the circulation desk. The chairman’s office has mahogany from Peru and a Connemara marble fireplace and detailed gold leaf on the coffered ceiling.

When the bank opened in 1906, this was the office of Edward F. “Boss” Swinney 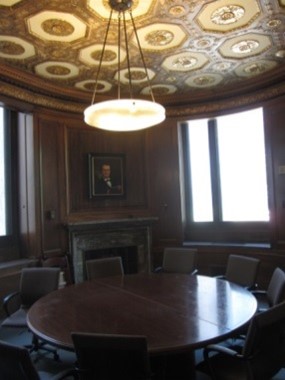 The Chairman's Office includes a replica of a self-portrait by George Caleb Bingham. The original is owned by the library and housed at the Nelson-Atkins Museum of Art 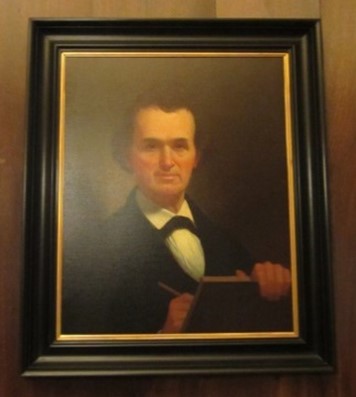 Bingham also painted General Order No. 11 (ca. 1865), and the library has a copy of this work behind the circulation desk. 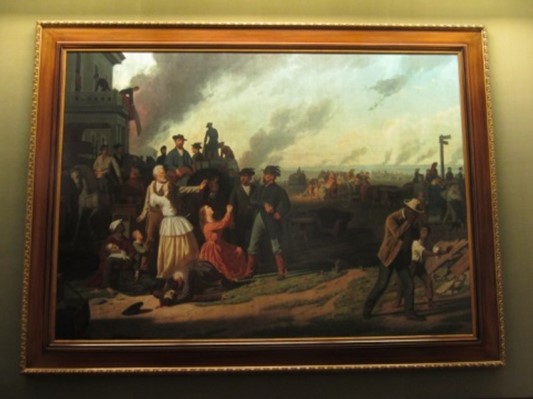 When the bank opened in 1906, this was the office of Edward F. “Boss” Swinney,41 First National Bank president from 1900-27, chairman from 1927-44. (Interesting fact about Swinney: He was hired as a cashier at the bank a year after it was founded in 1886 and worked his way up.) The chairman’s office has mahogany from Peru and a Connemara marble fireplace.43 There are “banded oak leaves and acorns in the crown molding, gold leaf on the coffered ceiling.” One of the doors led to a secretary’s office. Another “hidden” door is now a mechanical shaft that used to go to a tunnel under Baltimore Street. The tunnel is still there and is used for city infrastructure. Apparently, the tunnels were used by bankers in the vicinity to meet up; also, Shubert Theatre patrons used the tunnels to go to nearby hotels for a drink.