Located in front of Lippincott Hall is the statue of James Wood Green, the first dean of the University of Kansas School of Law. In order to create a statue that best embodied the spirit of the "Jimmy" Green, artist Daniel Chester French visited the law school and spoke with students and faculty. After learning about Green's life, French decided that the beloved teacher should be depicted with one of his students. The statue of a professor and student is the only one of its kind on any campus, and has become one of the iconic symbols of the University of Kansas.

This statue was dedicated in 1924 in honor of the late James Green, the first dean of the law school 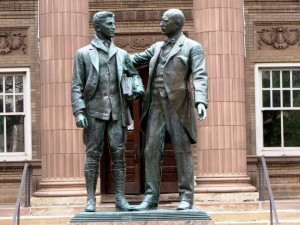 The statue is located in front of Lippincott Hall, formerly known as Green Hall. The building served as the home of the University of Kansas law school until 1977. After the law school moved to a new facility, students and faculty decided that the new building should bear Green's name. As a result, old Green Hall was renamed in honor of Joshua Lippincott, an early chancellor.

Sculptor Daniel Chester French modeled the statue of the student based on Alfred C. Alford, a graduate of the University who was killed in the Spanish-American War