Constructed in 1873 through the efforts of George Kettle, this indoor space connected two existing buildings and used the neighboring structures as side-wall support. Kettle constructed only front and rear walls for the arcade itself. In the 1980s, the building was decorated with a mural featuring key figures from Denver’s early history, including William Larimer, Chief Little Raven, sharpshooter Annie Oakley, con man Soapy Smith and Denver Mayor Robert Speer. 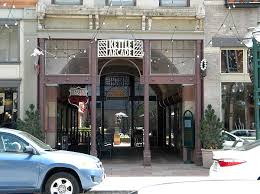 1988 Mural commissioned for the ceiling 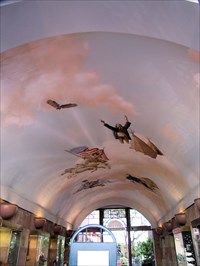 The Kettle Arcade Building - Squished between two other buildings 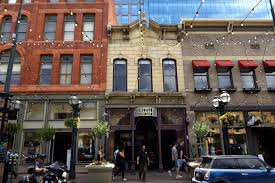 The Kettle Arcade is the first building in Denver to be built using the neighboring walls as its own and was part of a movement to renovate the wooden buildings in Larimer Square. The Kettle Arcade has a mural detailing Colorado History and was also the site of the first settlement of people of European descent in Denver. In 1865 there was a great fire in the square and since many of the original structures were made of wood, the city responded with a mandate requiring commercial buildings to utilize stone.

The Kettle Arcade was built in 1873. The building was constructed by George E. Kettle. Kettle was a cattleman, butcher, and real estate investor. Using the existing walls of the buildings on either side. He then built a front and rear wall and completed the structure using local sandstone. What makes this place special is that it was the first building in Denver to be built in this manner.

In 1988 a mural was commissioned for the ceiling. It features some important figures in Colorado History.