The Winder Building, view of the 17th and F Streets facades, taken from the southeast, March 1969 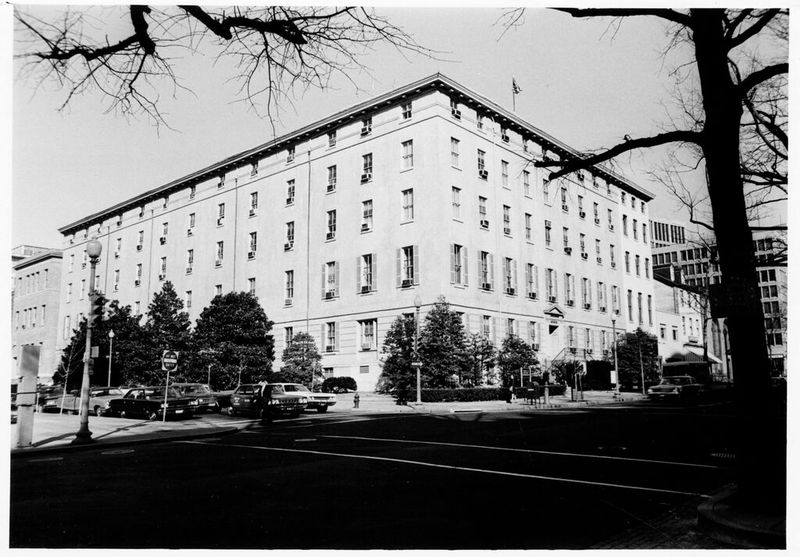 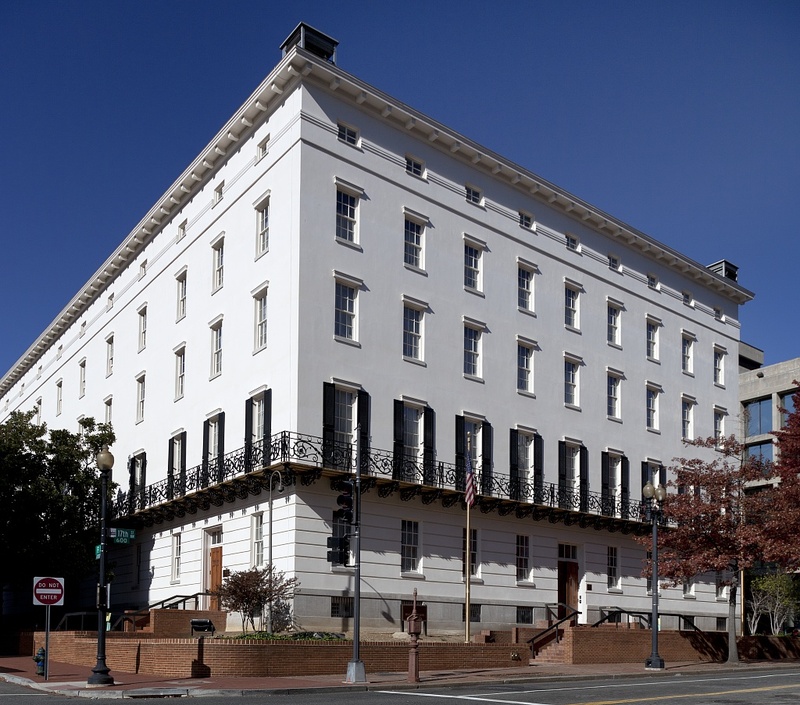 A 2008 photo of the initial historical marker plaque on the side of the Winder Building. The plaque mistakenly claims that President Lincoln used to visit the building to speak with Confederate prisoners. New research shows the building never housed prisoners. 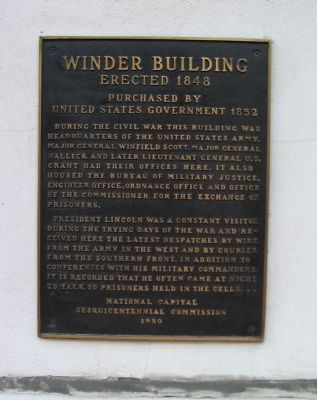 Signal Corps men stand at the Central Signal Station that was constructed atop the Winder Building in 1865. 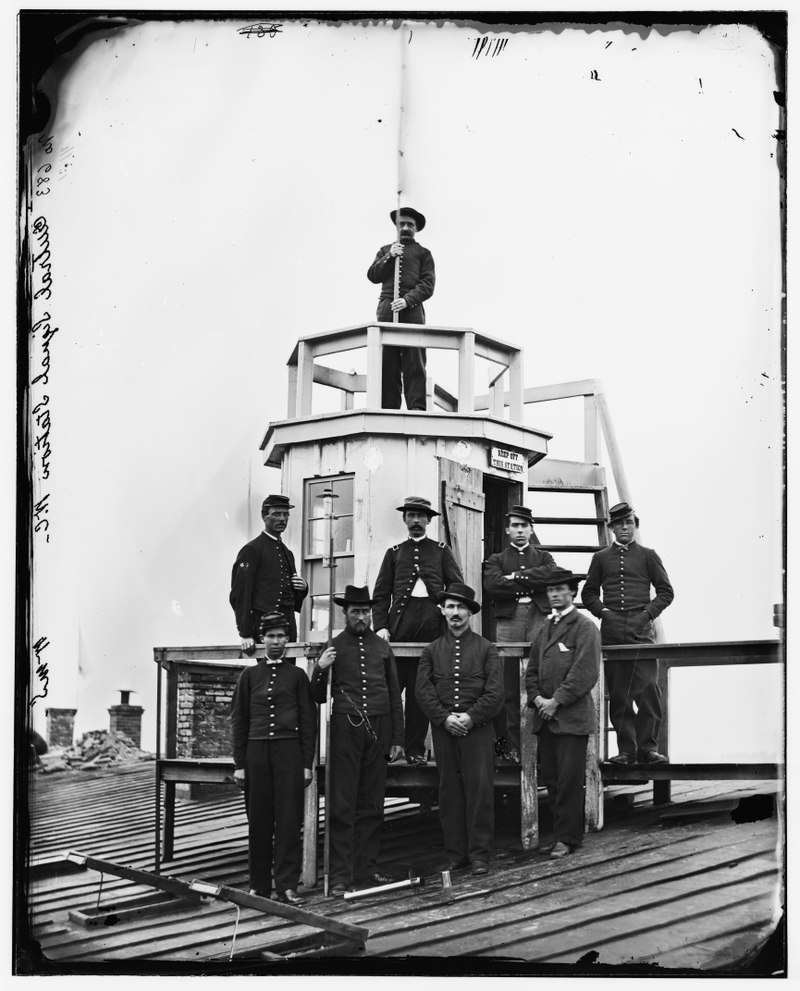 Constructed in 1846 and completed two years later as a commercial venture by William H. Winder, this building served as offices for leaders of the United States Army during the Civil War. At the time of its construction, the Winder Building was the largest and tallest building in the city, standing at 75 feet tall with five floor levels and 130 rooms. The building’s construction also was notable for its usage of iron beams and a central heating system.

Desperate for more office space in close proximity to the White House, the U.S. government began renting the building in 1848 for bureaus of the Interior, Treasury, War, and Navy Departments. Secretary of War Jefferson Davis, later the president of the Confederate States of America, purchased the building from Winder on behalf of the government in 1854 for $200,000. Winder's nephew, also named William Winder, was a general who was court-martialed for his failures leading the American Army during the Battle of Bladensburg in the War of 1812.

In addition to President Abraham Lincoln, Major General Winfield Scott, Major General Halleck and Lieutenant General Ulysses S. Grant were frequent visitors to the building. Lincoln often visited to discuss weapons that were being tested for use in the Union Army. Throughout the Civil War, the building provided space for many government offices, including the Navy Bureau of Ordnance and Hydrography, the Navy Bureau of Medicine and Surgery, the Army Corps of Engineers, the Army Corps of Topographical Engineers, and the Second Auditor of the Treasury.

Several myths about the Winder building became popular throughout its history, possibly as a result of several other government offices and buildings being located in its proximity. The belief that this building was utilized for telegraph communication is one such rumor. The Telegraph Office was located in the War Department Building (now the Eisenhower Executive Office Building) just across the street from the Winder Building. Despite there being no official records of military telegraph wires having been connected to the Winder Building, rumors surfaced that Lincoln commonly visited the building to read about events from the frontlines of the war sent through telegraphs.

Other popular myths related to the building include that Lincoln sometimes viewed military parades from the iron balcony of the Winder Building. According to official records, it is very unlikely this ever occurred or that it was a frequent occurrence. Perhaps the most widespread myth about the Winder Building is that its basement housed Confederate prisoners during the Civil War. There is no evidence that such prison cells ever existed inside the building. However, it is likely that civilian suspects sometimes were interrogated in the basement. This myth gave rise to rumors that Lincoln often visited the building to go into the basement and talk with the supposed Confederate prisoners. Despite the lack of evidence for these claims, the initial historical marker placed on the building in 1950 repeated the myth that Lincoln frequently visited to talk with prisoners.

Under the direction of General Montgomery Meigs, the Quartermaster General’s Department was at the forefront of the push to use the Winder Building as office space for Union Army officials. The Army Ordnance Department also was housed by the building. In the later stages of the war, General Joseph Holt successfully pushed to relocate the Bureau of Military Justice headquarters within the building. Holt also led his investigation into Lincoln’s 1865 assassination from inside the building. The same year, a signal station was constructed atop the Winder Building on behalf of the U.S. Signal Corps to send signals using flags to troops stationed in and around Washington D.C.

Despite being added to the National Register of Historic Places in 1969, the General Services Administration led an attempt to demolish the building soon after to make way for the Federal Home Loan Bank Board. Because of substantial public backlash, the GSA never followed through with its plans. From 1976 through 1979, the GSA conducted an extensive restoration of the building. During this restoration, the building received a new roof and exterior stucco with new windows of seeded glass in the fashion which was used in its initial construction. The entire inside of the building also was restored, and new elevators were installed. Because concrete did not yet exist at the time of the building’s construction, its initial floors were made of brick; as part of the restoration process, sand was laid over the brick with bluestone and slate placed atop. The architect of the restoration was Max Urbahn, who also has designed many other buildings for the U.S. government, including a large NASA structure at Cape Canaveral. Today, and since 1981, the Winder Building houses the Office of the United States Trade Representative.