The Ludlow Tent Colony Site is the Site of the Ludlow massacre in which 20 people died in an attack by the Colorado National Guard on a tent colony of striking coal miners and their families. The colony originated during a coal miners strike that began in September 1913 after miners and their families were evicted from company housing. The site was designated a National Historic Landmark on January 16, 2009. The monument was desecrated by vandals in 2003, but thanks to a preservation grant, it was restored in 2005.

United Mine Workers of America built this monument in 1918 to honor the victims of the Ludlow Massacre. 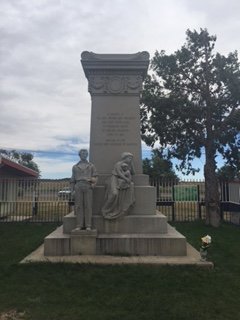 Members of the Colorado National Guard attacked the small colony of miners and the members of their families who lived at the tent colony. In addition to three union leaders and two miners, the attack led to the death of twelve children and two women. One National Guardsman was also killed in the attack along with a passer-by. This violent act inspired miners throughout the state to attack mines in a series of attacks and skirmishes known as the Colorado Coalfield War that led to 70 to 200 deaths.