Recognized as a National Historic Landmark on October 15, 1966, Fort de Chartres was French fortification built in 1720 by John Law and his Company of the West to conduct trade and protect his economic interests in the region. Named in honor of Louis, duc de Chartres, son of the Regent of France, the name also applies to two nearby fortifications built in the 18th century during the French Colonial control of Louisiana and Illinois. The fort's stone magazine is considered the oldest building in the state of Illinois.

The fort was named in honor of Louis, duc de Chartres, son of the Regent of France. The fort's stone magazine is considered the oldest building in the state of Illinois. 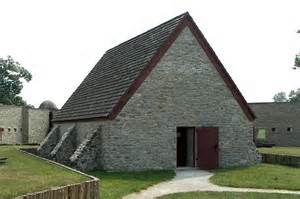 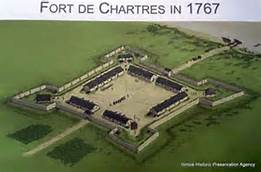 Fort de Chartres was a French fort first built in 1720 on the east bank of the Mississippi River in what is now Illinois. The Fort de Chartres name also applies to the two forts built nearby during the 18th century in the era of French colonial control over Louisiana and the Illinois Country. A partial reconstruction of the third and last fort are preserved in an Illinois state park four miles west of Prairie du Rocher in northwest Randolph County, Illinois in the floodplain area that became known as the American Bottom. The site was placed on the National Register of Historic Places and recognized as a National Historic Landmark on October 15, 1966.

On January 1, 1718, the French government granted a trade monopoly to the Company of the West. The company built a fort to protect its interests. The original wooden fort was completed in 1720 by a French contingent from New Orleans, as the local seat of government and to control the Indians of the region, particularly the Fox. Within five years, flooding from the Mississippi had left the original fort in ruin. A second fort further from the river was constructed in 1725. This fort was also made of logs and had a bastion at each of the four corners.

The second wooden fort deteriorated somewhat less rapidly but by 1742 was in bad repair. The French debated where to rebuild the fort. When the French crown took over the rule of the area in the 1730s, officials began to discuss the construction of a stone fortress. The government in New Orleans wanted to move the garrison permanently to Kaskaskia, but the local commandant argued for a location near the original site. The government decided to rebuild a fort in stone near the first forts. Construction began in 1753 and was mostly completed by the end of 1756; delays continued construction at the site for another four years. The limestone fort had walls enclosing an area of 4 acres. The stone for construction was quarried in bluffs about two or three miles away and had to be ferried across a small lake. In 1763 after the French Indian War possession of the fort was transferred to the British who remained there until the American Revolution. In May 1776 the remaining British left the Fort.

The State of Illinois acquired the ruins in 1913 as a historic site and restored the powder magazine in 1917. The powder magazine is thought to be the oldest existing building in the state of Illinois. A combination museum and office building were constructed in 1928 on the foundation of an original fort building.  Partial reconstruction of the fort's walls on the original foundations followed in 1989. The frames of some additional buildings were erected as a display of the construction used for the originals. Other buildings' foundations and cellars were exposed for educational display as well. The site is protected by modern levees, but the flood of 1993 breached the levee and sent waters fifteen feet deep to lap at the top of the walls.