This Victorian-style home was built in 1892 by James Murdoch, an architect known for St. Luke's Episcopal Church, and Chapel of Our Merciful Savior. The home has distinctive features that set the standard for the Foursquare style. The home is named after Clarence F Holmes Jr., an African American dentist who lived here and founded the Colorado branch of NAACP. Many other notable Denverites lived in this house such as Edward Abner of the American Woodman. As part of this organization, Abner provided insurance benefits to African Americans. 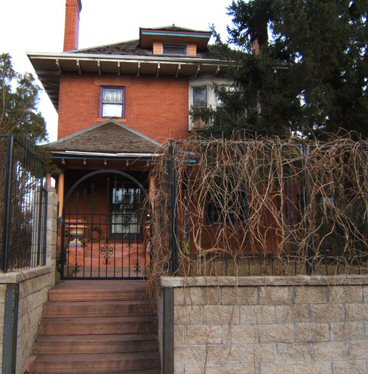 Close-up of hipped roof and overhang 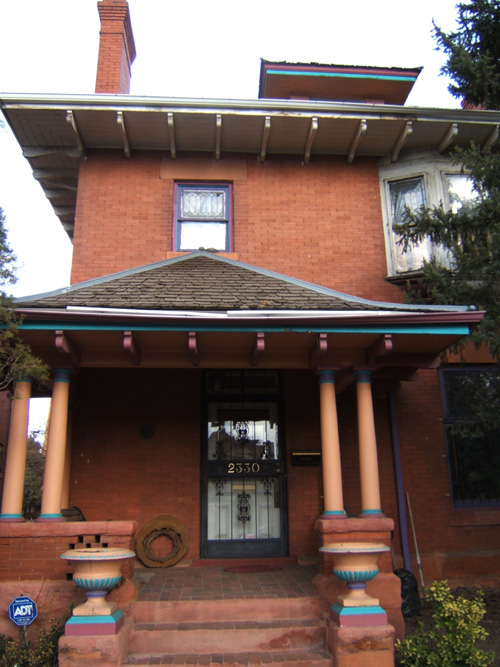 James Murdoch designed this house in 1892, which is precursor to Denver’s Foursquare style. It is a humble home in appearance but was home to many community leaders. Edward Abner, head of an African American fraternal insurance organization, called this home. It is named after Clarence F Holmes Jr. He formed the Denver branch of the NAACP

James Murdoch was born in Scotland. He came to Denver in 1888. By then he was already an established architect. He worked out of an office located in the Tabor Building from 1889-1895. In 1896 he became the superintendent of the Colorado State Capitol Building. He is best known for St Luke’s Episcopal Church, and Chapel of Our Merciful Savior. In 1892 he designed the Clarence F Holmes Jr home. It is a non-traditional Victorian Style home. This style is the precursor to the Denver Foursquare style. The home features a box shape, hipped roof and wide overhang.

From 1925-1935 Maude and Edward Abner owned this house. Edward Abner was Supreme Commander of the American Woodmen in Colorado. They were an African American fraternal insurance organization. The American Woodman were known for philanthropy in the black community. They were a very generous society that provided benefits for members. Benefits included: death, sick, accident, old age annuity and more. Additionally they would raise funds for people in need.

From 1943-1970 Clarence F Holmes Jr lived in this home. He was born in 1892 in Denver Colorado. He graduated from Manual High School in 1913. He attended Howard University College of Dentistry in Washington D.C. Holmes was the first African American dentist to join the Dental Society in Denver. His practice was located on the Historic Welton St. During the Great Depression he offered free services to his patients. He a founder of the CO-WY branch of the National Association for the Advancement of Colored People (NAACP). Additionally he founded the Glenarm YMCA which was open to African Americans in the era of segregation.