The Gates family plot uses the architectural burial style known as cribbing to mark the boundaries of the family plot. Outside of this initial burial plot, there are many Gates family members laid to rest within the 1850 Manatee Burying Grounds. The last burial that took place in this cemetery in 1962, was the burial of Eva M. Gates. 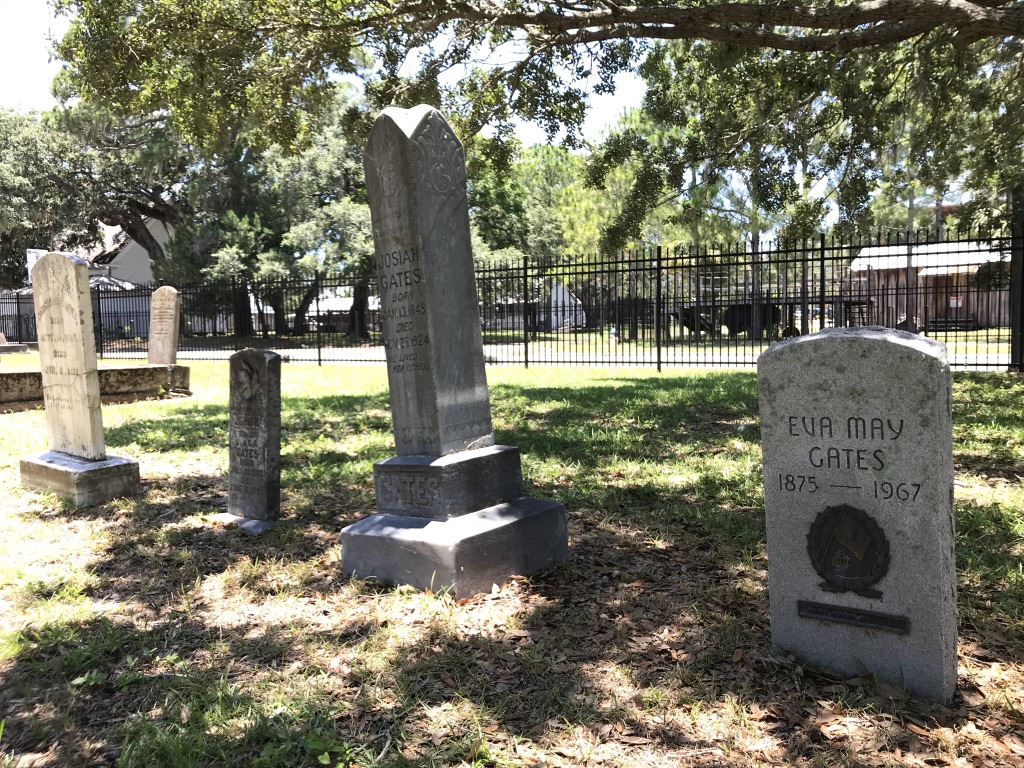 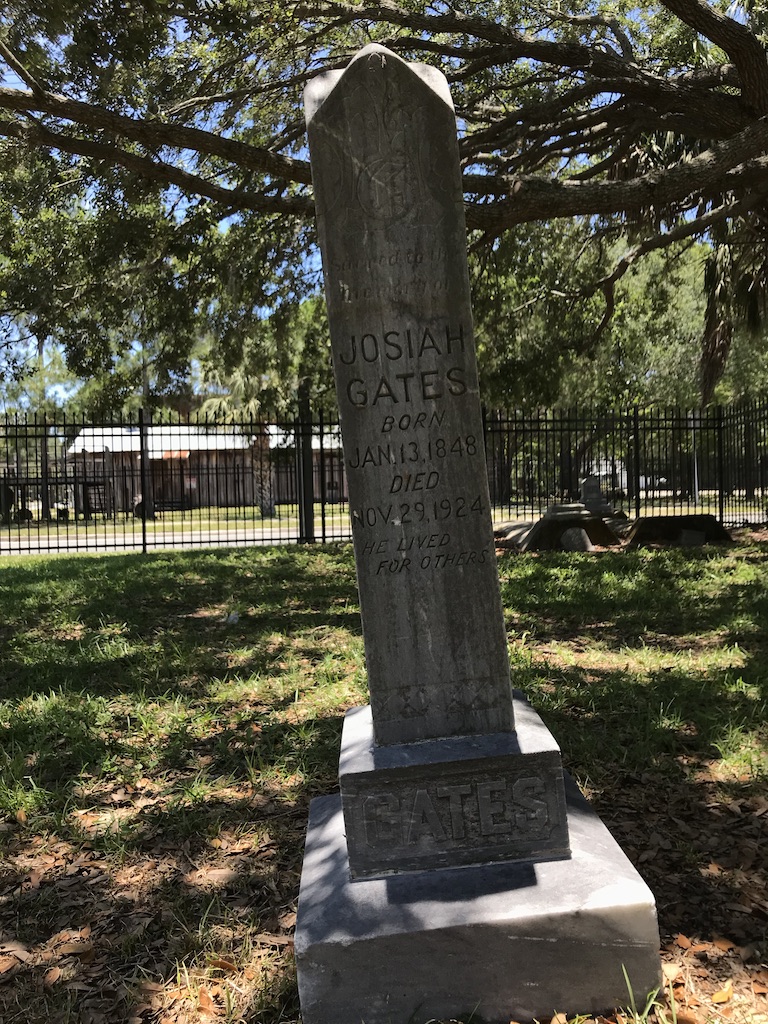 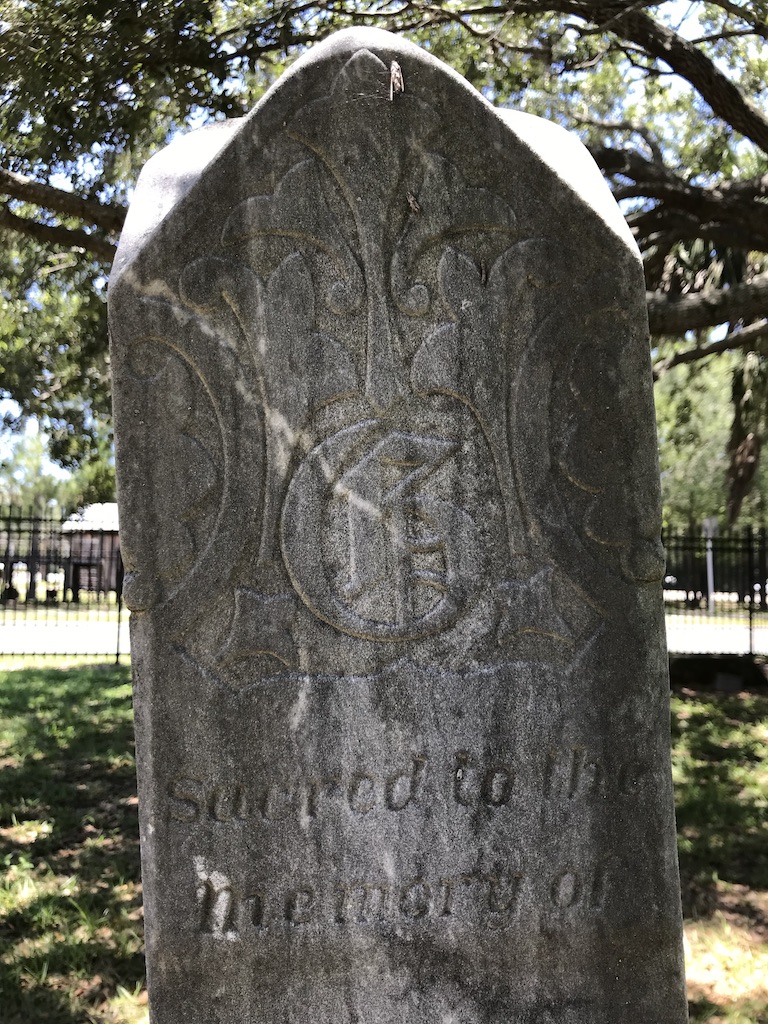 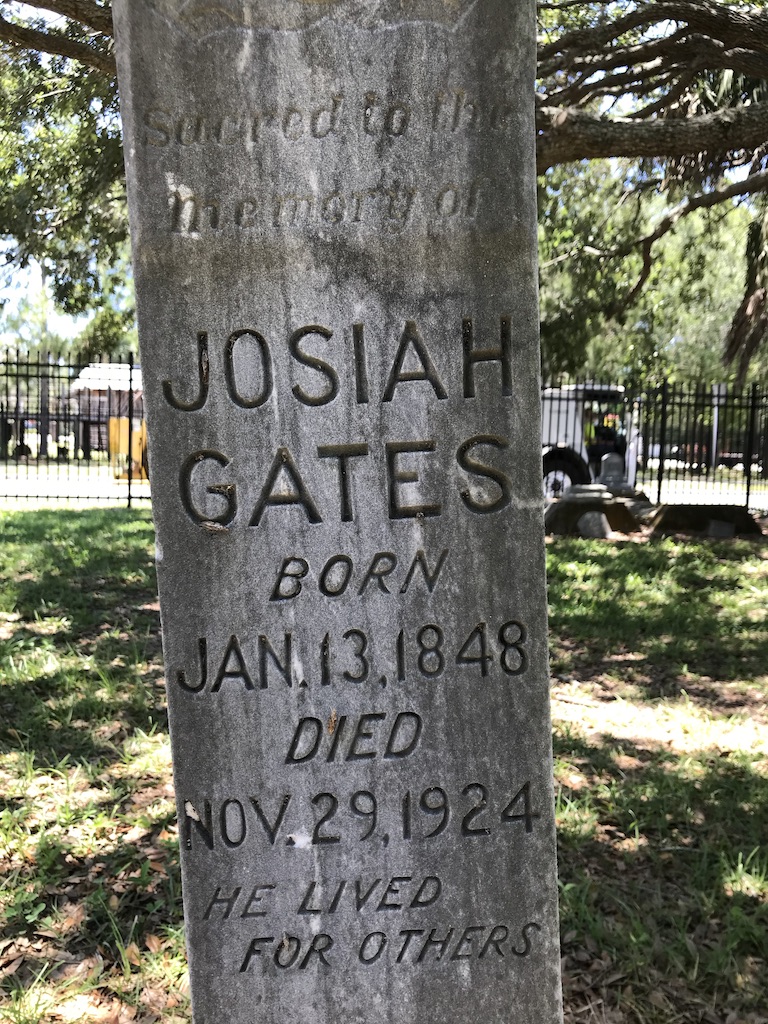 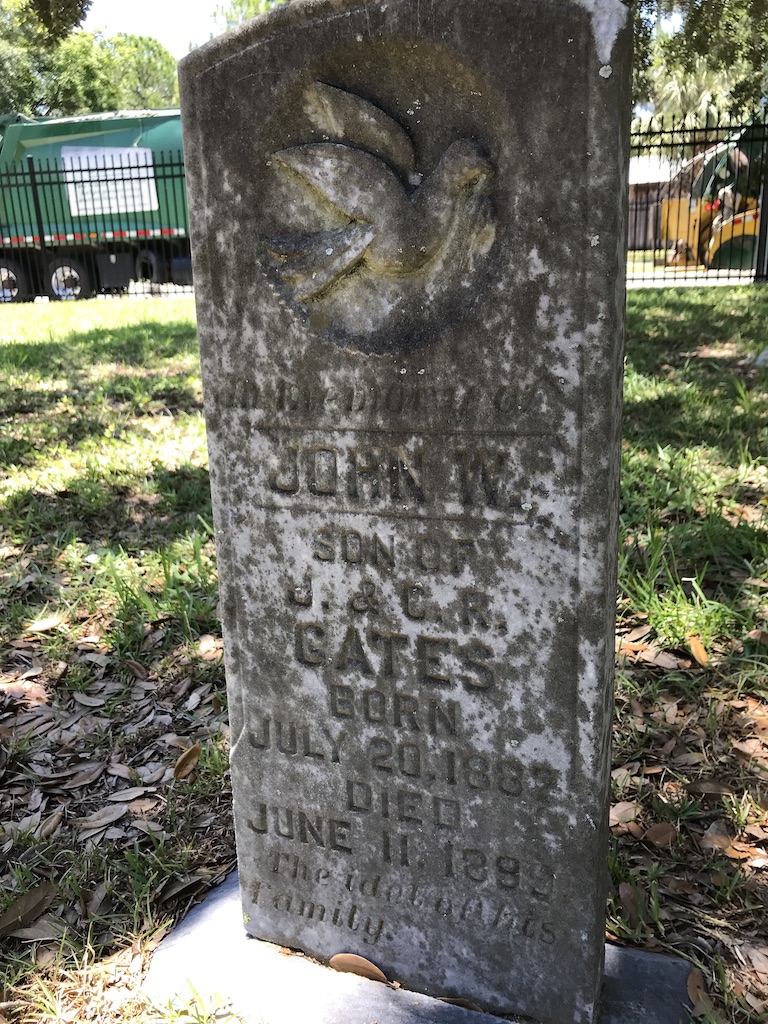 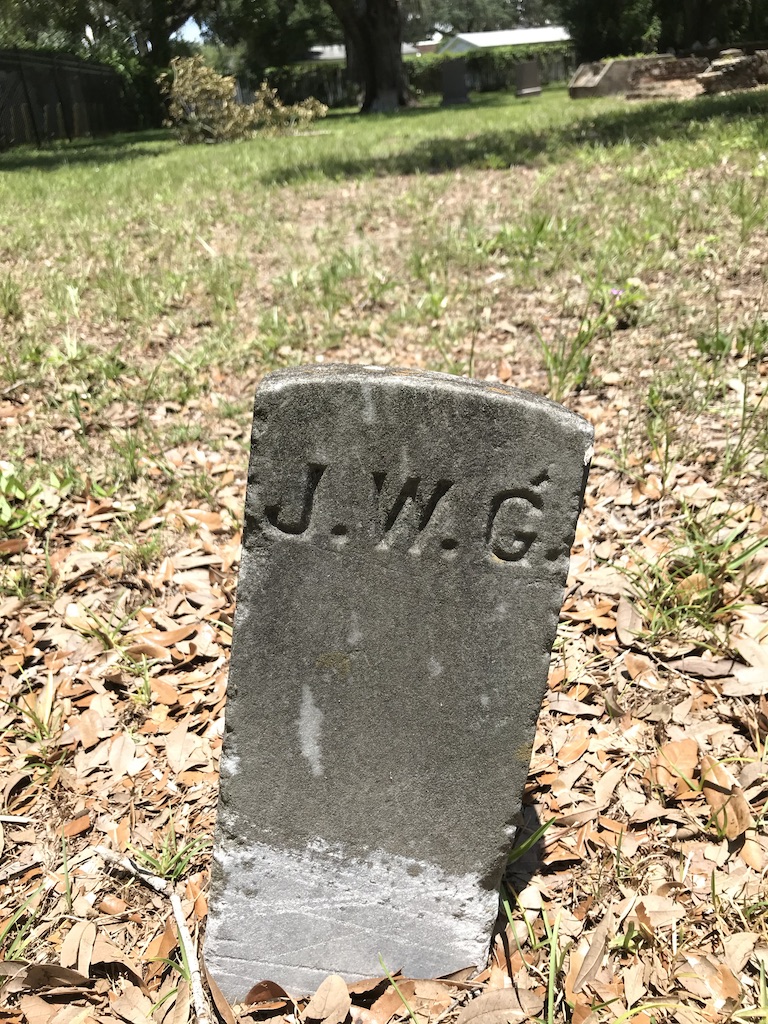 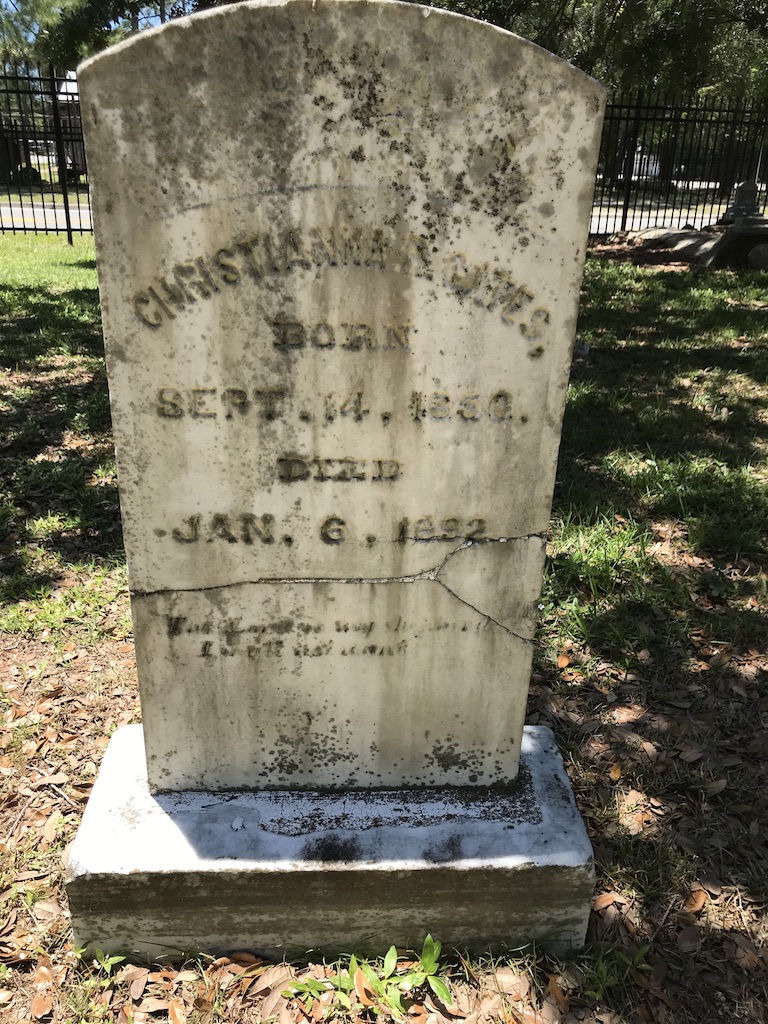 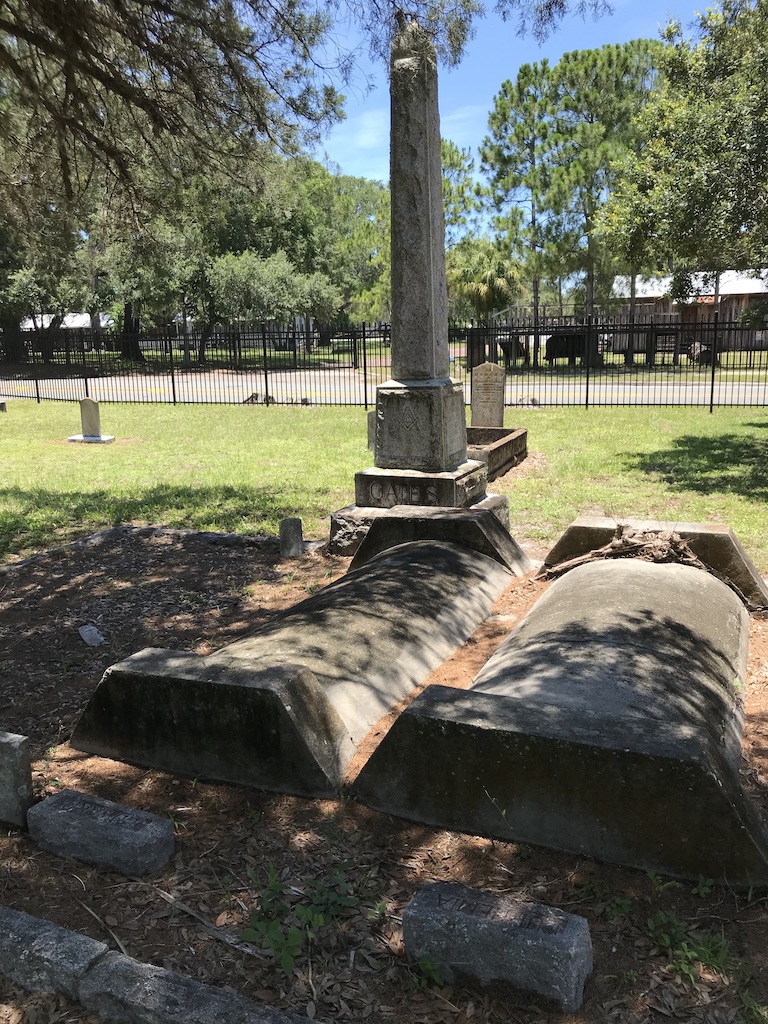 European-descended pioneer settlement here began in 1842 with the arrival of Josiah and Mary Gates and their family. They came seeking free land under the Armed Occupation Act. The act, passed in 1842, promised 160 acres of free land to any settler who cleared five acres, built a home, lived there five years and agreed to serve in the militia if needed.

In January, 1842, Gates loaded his belongings on the sloop Margaret Ann for the journey to Manatee. With him were his wife, Mary, their children Edward and Sarah, his brother-in-law, Miles Price and eight slaves. Soon after the Gates family arrived, others followed and the settlement became known as the Village of Manatee after the Manatee River and the water mammal that frequented it.

Josiah built his home 150 yards from the river bank. He chose the spot because it had once been an Indian encampment and the land was already cleared. A tract of the land even retained signs of recent cultivation. The house was a double pen log house with a wide “dog trot” or open air hall though the middle with three rooms on either side. The kitchen was in a detached structure. Separating the kitchen helped keep the house cooler in the summer and minimized the danger of fire. T

here were also quarters for slaves and shelter for animals. They enclosed the buildings with a high palisade of pine logs with tapered points at the top. The enclosure had a gate that was bolted at night as protection against Indians and wild animals. Nevertheless, one day a panther wandered into the kitchen while Mary was cooking. Her terrified screams brought her brother to the scene who shot the panther.

A settler’s life was not an easy one. Besides wild animals, they had to deal with the harsh Florida environment. In September, 1848, a hurricane hit the area. Even though the Gates home was on a rise, sea water overflowed the land around it. Despite this and other challengers, the home was place for new settlers and visitors to stay when they arrived in the area.

Around 1851, Gates built a large twenty room frame structure fronting the river near his old home to meet the demand for visitor lodging. The Gates Hotel was sixty by thirty feet with three stories and a broad double porch supported by eight pillars. All the lumber for the hotel had to be sawn, split and hewn by hand because there were no saw mills in the area. The building was a center of town life for many years. Church meetings were held in the fifteen by thirty dining room and the attic was home to the Masonic Lodge.

After Josiah Gates died in 1871, Mary continued to run the hotel for many years. Shortly before her death in 1896, the hotel was sold and its name changed to the Manatee Hotel. It still stood as late as the 1940’s and though in poor condition, was still used as a rooming house. The Gates had five children. In 1873, Josiah Gates, Jr. married Christianna Pelot, sister of Dr. John C. Pelot. For many years after, they worked at the Gates Hotel helping his mother run it. When it was sold, they built a home near Christianna’s family. Josiah Gates, Jr. became a realtor and later mayor of the Town of Manatee.