Fort Bayard was originally established in 1866 as a U.S. Army fort to protect settlers of European descent as they traveled along the Apache Trail. In 1869, the fifteen square miles of land were set aside as the Fort Bayard Military Reservation. The fort was named in honor of Brigadier General George Dashiell Bayard the who was killed at the Battle of Fredericksburg. Like many frontier forts, this fort was garrisoned by African American troops that came to be known by the moniker of "Buffalo Soldier." After the capture of Apache leader Geronimo the fort was converted into an Army Tuberculosis Hospital and research center.

The fort was garrisoned by Company B of the 25th United States Colored Infantry. 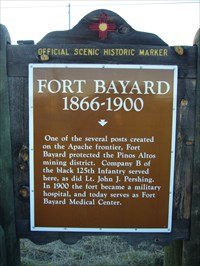