In 1965, the construction of the Rio Grande Gorge Bridge was completed, and the bridge stands as a significant representation of the New Mexico's transportation system. After New Mexican political officials advocating for a span to connect the Four Corners region to northeastern New Mexico through an extension of U.S. Route 64, Governor Jack M. Campbell issued state funds to finance the bridge's construction. In 1987, The 1,280ft. long and 36ft. wide bridge was once listed in a survey as one of the highest rated bridges in the U.S. The bridge was later listed on the National Register of Historic Places for its design and workmanship. Currently, the Rio Grande Gorge Bridge has one of the largest steel truss decks in New Mexico, and it is the tenth highest bridge in the U.S.

In All of its Glory: The Rio Grande Gorge Bridge 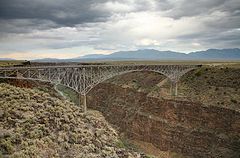 In All of its Honor: The Rio Grande Gorge Bridge 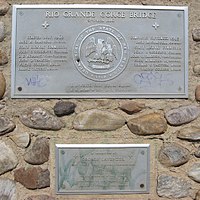 A Bridge with a View: The Rio Grande Valley and River (Bridge Viewpoint)

Somewhere Over the Rainbow: Rainbow Over the Bridge 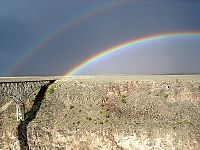 The construction of the Rio Grande Gorge Bridge was a collaborative effort comprised of Bridge Design Section of the New Mexico State Highway Department, American Bridge Company, and the J.H. Ryan and Son, Inc. of Albuquerque, New Mexico. As part of US Route 64, he bridge's construction began in 1963 and was completed in 1965. The total cost of the bridge's construction was approximately $2.15 million. The bridge's total length is approximately 1,280ft. long and 36ft. wide. The substructure of the bridge is compromised of of two U-type reinforced concrete abutments on spread footings and two piers with concrete columns extending 80 feet from the ground line. The bridge consists of three spans; the central span measures around 600ft. and two 300ft. spans on each side.

The exact height of the bridge from the bottom of the Rio Grande Valley has been up in the air ever since its construction, but ever since its introduction to the National Register of Historic Places, it is said that the bridge is 650ft. tall, and that number has been used widely for the bridge. Some people and articles argue that the bridge is 600 ft. high. The bridge's deck consists of a lightweight concrete-filled steel grid floor. The 36ft. wide truss deck has a 28ft. wide two-lane roadway and a concrete curb, and two four-foot sidewalks flanking the roadway. In the middle of the bridge, there are small observations decks, and the sidewalks are lined and barricaded with steel to protect pedestrians from the road.

After WWII, many New Mexican political officials advocated a need for a bridge that would connect the Four Corners region to northeastern New Mexico through an extension of U.S. Route 64. In 1962, the newly elect governor of New Mexico, Jack M. Campbell issued state bonds to finance the construction of the bridge. While constructing the bridge, engineers were concerned on developing a design that would be sufficiently strong to carry the loads associated with shipping along a federal highway and one that could withstand the high winds that swept down the valley. During construction, the engineers, who were going to build the deck with an open grid, switched to a lightweight concrete-filled grid due to the opposition from local sheep herders. The herders were worried about moving their flocks of sheep across the bridge. Also, engineers felt concerned that tourist might feel uncomfortable peering through the bridge's deck.

Once the bridge was completed, it resulted in the extension of U.S. Route 64 from North Carolina in the east to Shiprock, New Mexico in the west and provided northern New Mexico with its first latitudinal highway. In 1987, a bridge survey rated the bridge as one of the highest rated bridges in the U.S. In 1997, the bridge was listed on the National Register of Historic Places for its high degree of integrity regarding its setting, design, materials, and workmanship. There is a plaque on the bridge that honors the bridge's construction and all who were involved with the construction. In 2012, the bridge went under a $2.4 million "facelift" that included replacing the steelwork and adding new gutters, ramps, curbs, and sidewalk. Additionally, a new cement deck surface was also implemented onto the bridge. Currently, the Rio Grande Gorge Bridge has one of the largest steel truss decks in New Mexico, and it is the tenth highest bridge in the U.S.