Built and designed by Otto H. Thorman (1911-1964) in 1926, the Rio Grande Theatre quickly became a focal point of downtown Las Cruces and a community gathering place. The Rio Grande Theatre was one of many movie palaces that was built during the "Golden Age" of U.S. cinema construction. Thorman utilized the Renaissance architectural style for the theatre, and several revolutionary features were implemented into the theatre, such as a "wash air cooling system" and an acoustic equipment for films featuring sound. Throughout the 20th century, the theatre showcased several performances, such as film premiers, vaudeville shows, concerts, and plays. In 1997, the theatre closed due to financial hardship, but later, the property was acquired by the Doña Ana Art Council. In 2004, the theatre was listed on the National Register of Historic Places for its well-preserved Renaissance design and its contributions as an entertainment center in downtown Las Cruces, New Mexico. After extensive renovations, the council opened the theatre in August 2005. Currently, the theatre continues to hold performances, matinees, lectures, and other community events, and to this day, it is the only operating two-story adobe theatre in the U.S. 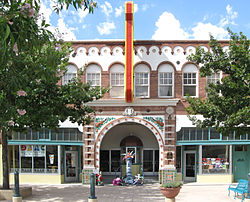 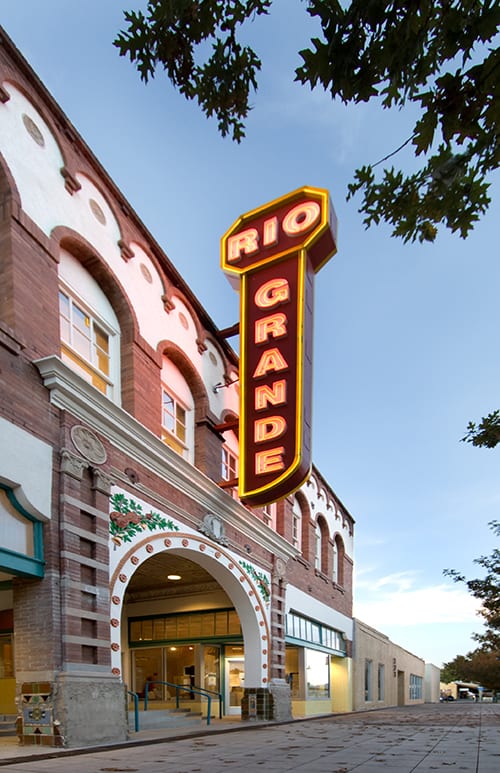 The Stylish Auditorium of the Theatre 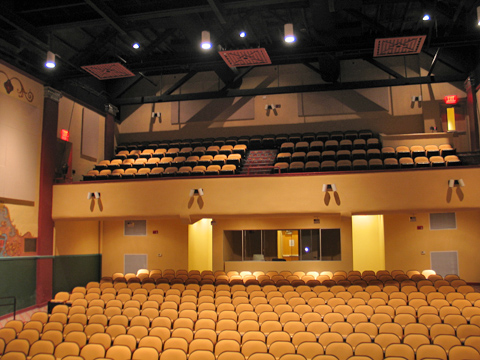 The Rio Grande Theatre was designed by southwest architect, Otto H. Thorman (1911-1964) in 1926, and that same year, the theatre opened by the Central Theatres Corporation of Denver. The two-story theatre took the name from the nearby Rio Grande River. Before the site became a theatre, the old Benevolent and Protective Order of Elks Lodge was originally situated at this location. Thorman, who started his architectural career in Albuquerque, took inspiration from the Renaissance style, and the building was constructed mostly with adobe. The front of the building is constructed of a mixture of rick, concrete, terra cotta and stucco. At the entrance way, a ribbon of arches with small steel rosettes at the center of each arch and a string of dentils above, define the roofline. Between the entrance and exit's doorways, there is an antique box office with a domed roof. On both sides of the entrance, there are retail shops with large window displays that were once part of the theatre. The second floor of the exterior is decorated with a row of arched windows, a white intricate design that highlight the windows, a flat roof, and a metal marquee sign, bearing the theater's name. The sign was constructed and attached to the theater around the 1970s.

Inside of the theatre, the lobby was supported with white Renaissance-like support columns. The theatre has an auditorium with numerous seats, plaster walls with etched with flowery designs, and a wooden planked performative stage with an adobe wall at the back. There is a wooden staircase that leads to the balcony of the auditorium. The balcony seating areas extends over 15 feet above the ground level seating in the auditorium. The rear of the balcony leads to the former projection room and office. It was one of the first movie theaters in the U.S. that had a "washed air cooling system," which was a perfect selling point for potential moviegoers trying to escape New Mexico's summer heat.

After it opened in 1926, the theatre quickly became a focal point of downtown Las Cruces and a community gathering place. The theatre was constructed during a time during the "Golden Age" of American cinema construction, which was when Hollywood was entering the "Golden Age Cinema" era. When the theatre was opened, the first film ever showed was Rex Ingram's silent film, Mare Nostrum. In 1929, Fox West Coast Theaters bought the theatre and incorporated sound equipment, and the theatre began projecting movies with sound. The theatre survived several natural tragedies in the early 1930s, such as an earthquake and a fire. There were several renovations made to the theatre to fix the damage, such as the roofing and walls. Other performances that were held at the theatre included several vaudeville acts, the Moscow ballet, the Glenn Miller Orchestra, the Vienna Boys Choirs, folk legend Janis Ian, and piano virtuoso, George Winston.

The theatre was open until 1997 when it was closed down due to financial hardship. The Doña Ana Arts Council purchased the theatre and spent $2.2 million to renovate the building. In 2005, the council reopened the theatre, and the theatre continues to serve as a social gathering place where concerts, plays, films, lectures, children's matinees, and literary events are held. The theatre was listed on the National Register of Historic Places in 2004 for its well-preserved Renaissance design and its contributions as an entertainment center in downtown Las Cruces, New Mexico. The theatre is currently owned by the City of las Cruces and managed and operated by Visit Las Cruces. To this day, the theatre is the only operating two-story adobe theatre house still standing in the United States.