Scotts Bluff National Monument is large, 3,000 acre park west of the town of Gehring, Nebraska. It is historically significant for its natural and cultural history, and its association with the pioneer trails and westward expansion. The most salient feature of the monument is its pair of bluffs (the north and south bluffs), which constitutes the largest isolated land mass in the state. The bluffs are well over 700 feet high and feature a number of outcroppings such as Dome Rock, Saddle Rock, and Eagle Rock. Saddle Rock is the highest, reaching a height of 780 feet (4,659 feet above sea level). Highway K runs in between the bluff and that is where the visitor center and museum is located as well. Scotts Bluff is named after Hiram Scott, an employee of a fur company who died here in 1828. Scotts Bluff was and remains an important natural landmark.

Scotts Bluff National Monument was created in 1919. The rock outcropping in the background is Eagle Rock. 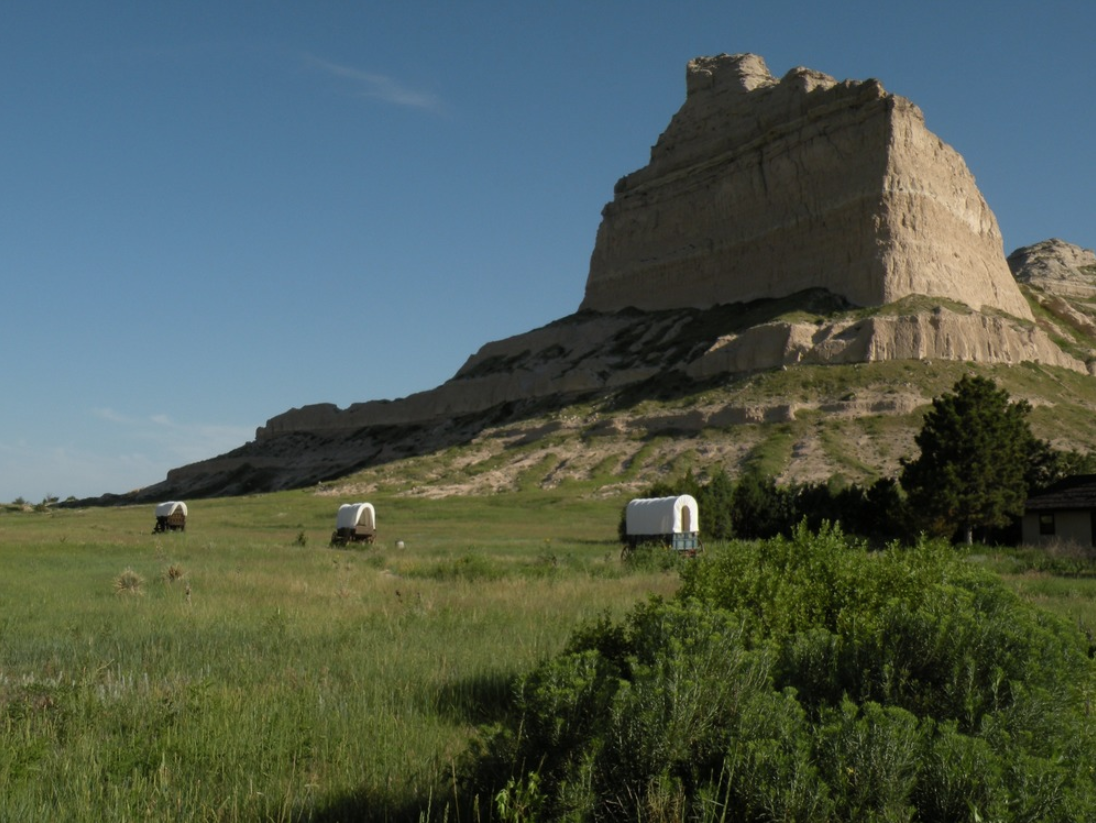 In terms of geology, Scotts Bluff reveals layers of rock are 34 to 20 million years old. As such, geologists have been able to learn about how the bluffs were formed over millions of years. A variety of natural forces created them including ancient seas, volcanic eruptions, sand dunes, water, and wind. Natural forces continue to shape them today.

While it is unclear what, if any, significance the bluffs had for Native Americans, they did camp here. But for European and American explorers and settlers, Scotts Bluff was a key landmark. Settlers heading west on the Oregon, Mormon, and California Trails passed the bluff and often wrote about it in their journals and diaries. Between 1843-1869, more than 250,000 settlers passed by Scotts Bluff. Horse riders of the Pony Express, the mail delivery service that operated from 1860-1861, also passed through.

Creation and Development of the Monument

President Woodrow Wilson officially established the monument on December 12, 1919, four years after the initial efforts to create it began. Over time, picnic areas, hiking trails, the museum and visitor center, and other amenities were added. That road that leads to the summit was built in the 1930s (tunnels had to be built for the road as well). A new visitor center and museum opened in December 2019.