Dedicated in 2015, this memorial at the state capitol was dedicated to recognizing the victims of the Armenian Genocide, an atrocity that saw the deaths of millions from 1915 to 1922. The memorial consists of a Khachkar stone made of volcanic ash to commemorate the resiliency of the Armenian people, a religious minority who were castigated as a threat by the new ruling power in what became the nation of Turkey as the Ottoman Empire crumbled. The Armenian Genocide was recognized as a genocide by the U.S. officially until 2019, and still is not recognized as such by the Turkish government. In May of 2020, the Khachkar stone was vandalized during a series of protests that began to draw attention to police brutality in the wake of George Floyd's death. 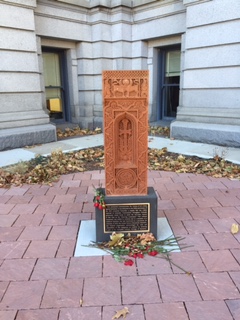 Memorial damage from George Floyd Protests in May of 2020. 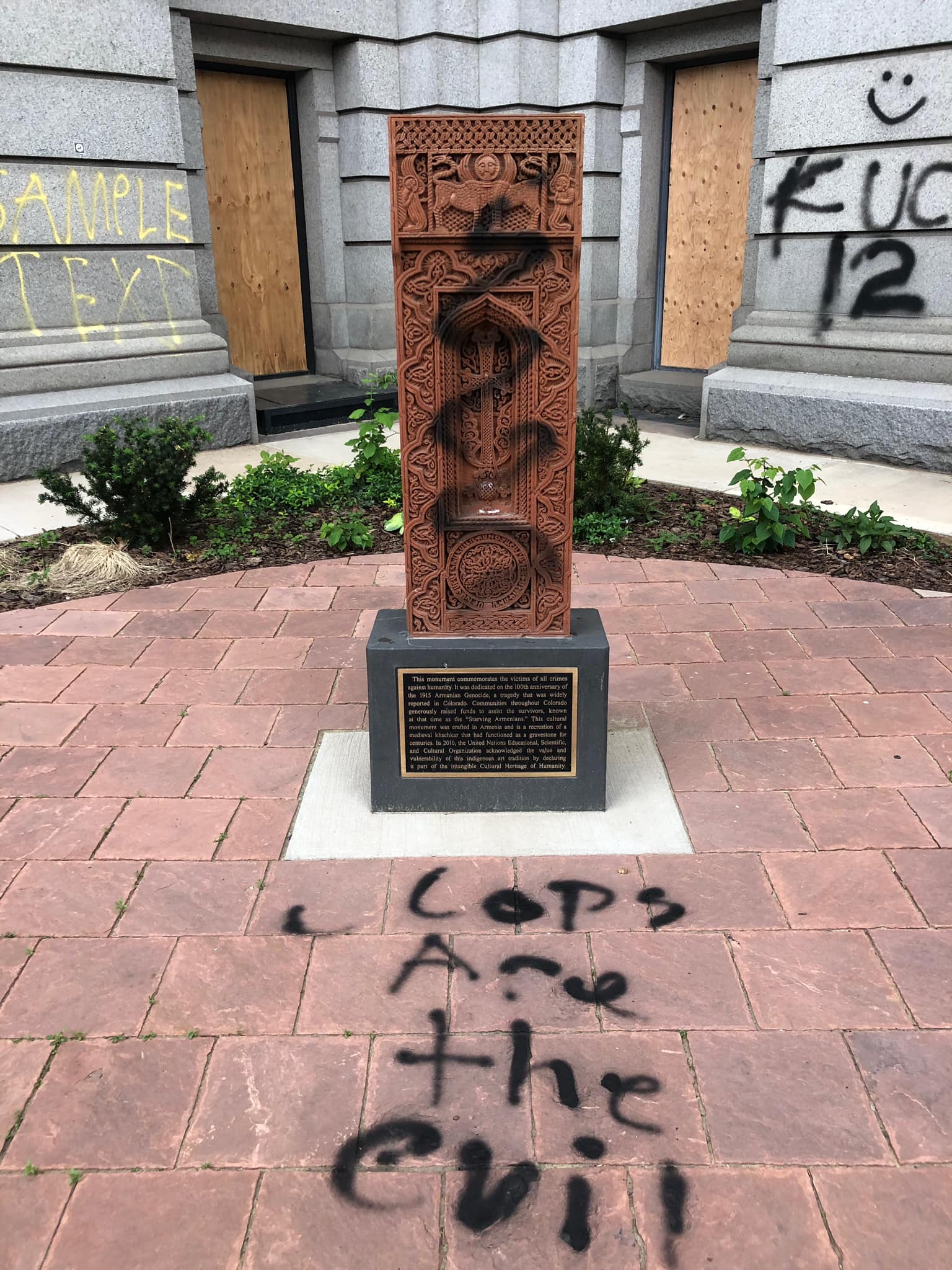 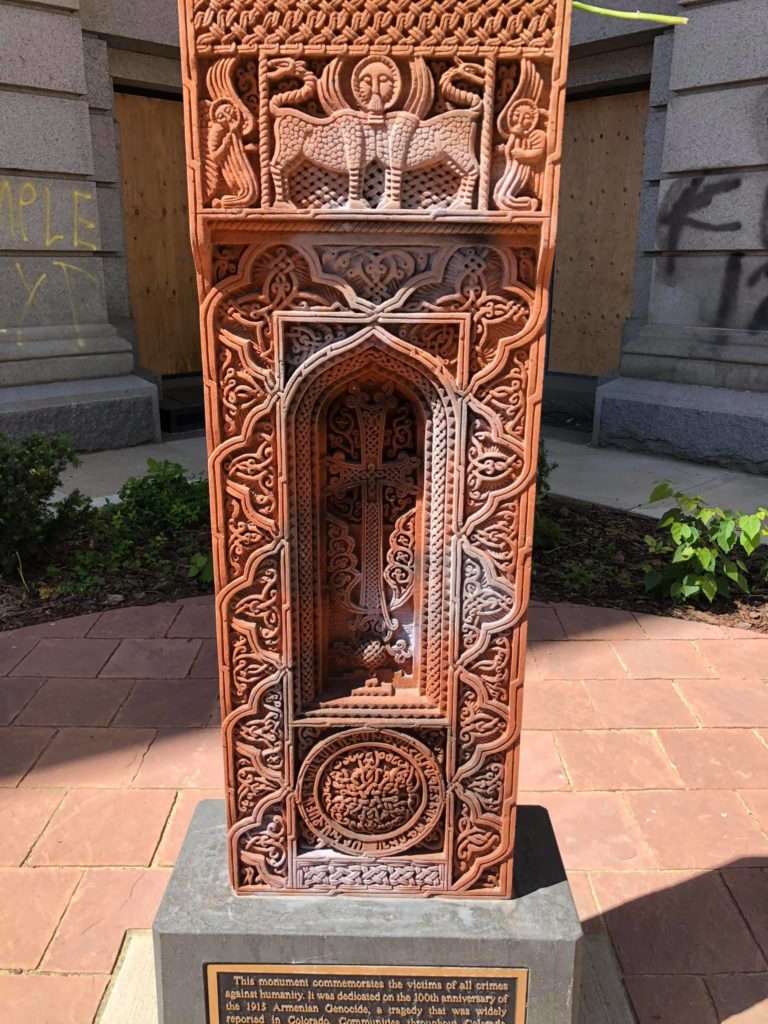 On April 24,1982 a joint resolution commemorated the day as “Colorado Day of Remembrance of the Armenian Genocide." The U.S. House of Representatives would not formally recognize as a genocide under its own resolution until 2019. The Armenian Genocide is the name recognized by historians for the Ottoman Empire’s annihilation of 1.5 million Armenians. Long discriminated against as a religious minority, the Armenians were Christians and viewed as a threat by the new rulers of what became the nation of Turkey as the Ottoman Empire crumbled during World War I.

Armenians suffered episodic violence in the decades before World War I. Records of state-sanctioned pogroms against Armenians occurred as early as 1894 by Turkish Sultan Abdul Hamid II when hundreds of thousands of Armenians were murdered and villages destroyed. The worst episode of violence began on April 24, 1915 and lasted through 1922. In honor of the lives that were lost during this seven-year period, this memorial was constructed at the Colorado State Capitol. The memorial consists of a Khachkar stone, a reflection of Armenian culture. The memorial also includes a memorial plaque, and gardens, although the stone was vandalized during the George Floyd protests in May of 2020.

Armenians lived in the Caucasus region of Eurasia for 3000 years. In 4th century AD, it became the first nation to make Christianity the official religion. During the 15th century, Armenia was absorbed into the Ottoman Empire, who were Muslims. They labeled the Christian Armenians "infidels," forcing them to pay higher taxes, and providing them less political rights. Despite this, the Armenians flourished, as they were wealthy and educated. In addition to the resentment this caused, the Turkish feared Armenians would become loyal to Christian governments such as Russia, who shared an unstable border with Turkey. This led to the first massacre of Armenians from 1894-1896, with Sultan Abdul Hamid II declaring he would solve the "Armenian question" once and for all.

In 1908, the “Young Turks” came to rule the Ottoman government and overthrew Hamid II. With their nationalistic agenda, their goal was to cleanse the population of all non-Turks, with Armenians being their number-one target. In 1914, the Ottoman empire sided with Germany in World War I. Simultaneously, they started a holy war against all Christians except their allies. In 1915 the genocide began, as Ottoman authorities believed Armenians would fight with their enemy, the Allied Powers, if they believed their victory could bring about independence for Armenians. After arresting intellectuals, many were sent on death marches through the Mesopotamian desert without food, water, or clothing, and were shot if they stopped to rest. “Killing squads” or “butcher battalions” made up of murderers and ex-convicts were sent out to kill the Armenians. They drowned people in rivers, threw them off cliffs, crucified, and burned them alive. They kidnapped children, converting them to Islam and giving them to Turkish families. Women were raped, forced into Turkish "harems," or enslaved. Around 1.5 million Armenians were massacred. To this day, the Turkish government still does not recognize the events as a genocide, instead declaring the Armenians were an enemy and it was a necessary war measure.

This memorial features three elements: a garden, a Khachkar, and a plaque. The Khachkar is located in the northeast corner of the capitol building. The additional plaque is located just north of that below a blue spruce. The gardens surround this corner. The area is maintained by the Armenians of Colorado (AOC), a nonprofit established in 1980 with the aim of spreading awareness of the Armenian Genocide, while also eliminating fear and hatred from social communities.

The plaque under the blue spruce reads:

ONE AND ONE HALF MILLION ARMENIANS.

VICTIMS OF THE FIRST GENOCIDE OF

The Khachkar is an elaborate red cross-stone constructed of volcanic ash. It is a replica of a medieval cross-stone from the Djulfa cemetery, a cemetery regarded as one of the wonders of Caucasus. Djulfa's residents were forced to leave by Shah Abbas in 1604, but the cemetery remained as the largest Armenian graveyard in the world, with around 10,000 headstones made of carved khachkars. It was partly destroyed to lay railroad tracks in 1903, then in 1921, the Azerbaijan government began using the headstones as building material, leaving about only 2,000 headstones in 1988. In 2005, the Djulfa cemetery was destroyed completely by the Azeris with sledgehammers in an act to erase Armenian history. Thus the original is lost.

In May 2020, the Khachkar stone was vandalized during the protests of the killing of George Floyd. Graffiti was sprayed over the stone and around the base of the memorial. People were told not to attempt to clean the stone, as it had to be cleaned by a specialist because of the material used. However, as of June 2, 2020, people who had attempted to clean the stone caused further damage.