The stone house was built circa 1823 and may have initially been used as a roadside tavern (it was not as close to the road as it is at present, but it did have two front doors, a common feature of early 19th century taverns in this area). By the time of the Civil War however, it was likely the home of the overseer employed by the Stuarts. It remained a private residence until 1967 when it was purchased by the International Town and Country Club. 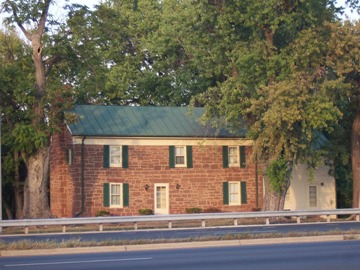 Cornelia Lee Turberville Stuart inherited land from her Turberville father in 1817. She and her husband, Charles Stuart, honored her Lee family ancestors by naming the mansion house and farm they built there in 1818 Chantilly, after the home of Richard Henry Lee, who had signed the Declaration of Independence. Noted for it's beautiful setting and the elegant hospitality of the Stuarts, Chantilly exemplified the traditions of Virginia's gentry class. This genteel lifestyle is often remembered romantically, but reality was more complex as the Stuart's elegance and hospitality depended on the labor of enslaved people.

On December 31, 1854, four enslaved men, Trolious, Henry, and Douglas Riley, and a man known only as Vincent, escaped from Chantilly farm in a bid for freedom. Trolious Riley, 25 years old, was a house servant and Henry Riley, about 20 years old, was a farm hand. The other men were also in their early 20s. Charles Stuart's son, Sholto, placed an ad in the Alexandria Gazette offering a reward of $100 each if a man was secured outside the state and $50 if captured in Virginia. In the ad he expressed surprise that the men had fled, noting that two had left behind wives and infant children, and that Sholto "had no doubt" they had been aided by "some abolitionist living in Fairfax." Dissent among the people enslaved by the Stuarts was not new. In 1849, Sholto had sent another group of four men south to Arkansas so as to keep them from absconding. Charles Stuart had died in 1846 and the long process of settling estates often resulted in the division of enslaved families, and so it may have been that the Rileys and Vincent left in an effort to preserve their families. We have no explanation from the men themselves, and so can only speculate. Whatever their aspirations, they were not realized. Trolious, Henry, Douglas and Riley were captures, jailed, transported to Richmond and sold for more than $2600.

The Civil War brought Chantilly's contradictions to a rapid and violent end. Occupied by Union soldiers in the early years of the war, even the target of a raid by Colonel John S. Mosby and his men, Chantilly was burned in 1863 and all the buildings were destroyed except the overseer's house and one of the "servants' quarters." The stone house you see here today is one of those buildings.

Debbie Robison. Unsuccessful Bid for Freedom, the Plight of the Rileys, in Northern Virginia History Notes. Accessed via website, 6/21/2020: http://www.novahistory.org/Freedom_Seekers.htm.