Constructed in 1912, this early skyscraper served as the home to the Commercial Club of St. Paul, a company that was established in 1891. The building also held the offices of the St. Paul Association of Commerce. The Commercial Club was a membership organization that offered the chance to network and worked to bolster the city's reputation as a suitable home for industry and commercial activity similar to other membership organizations that operated in major cities during the Gilded Age. The building offered amenities for its members, from fine dining to billiards rooms, as well as tea rooms and parlors. The economic disruption of the Great Depression, followed by World War II, led to declines in membership, and fraternal organizations around the country were forced to sell their lavish downtown headquarters. The building eventually faced a tenant shortage. Although many s neighboring structures were demolished during the 1950s, this building survived. In 2008, it was converted to apartments as more working professionals returned to the city core.

Commerce Building in St. Paul. The building opened in 1912 and transitioned into an apartment complex in 2008. 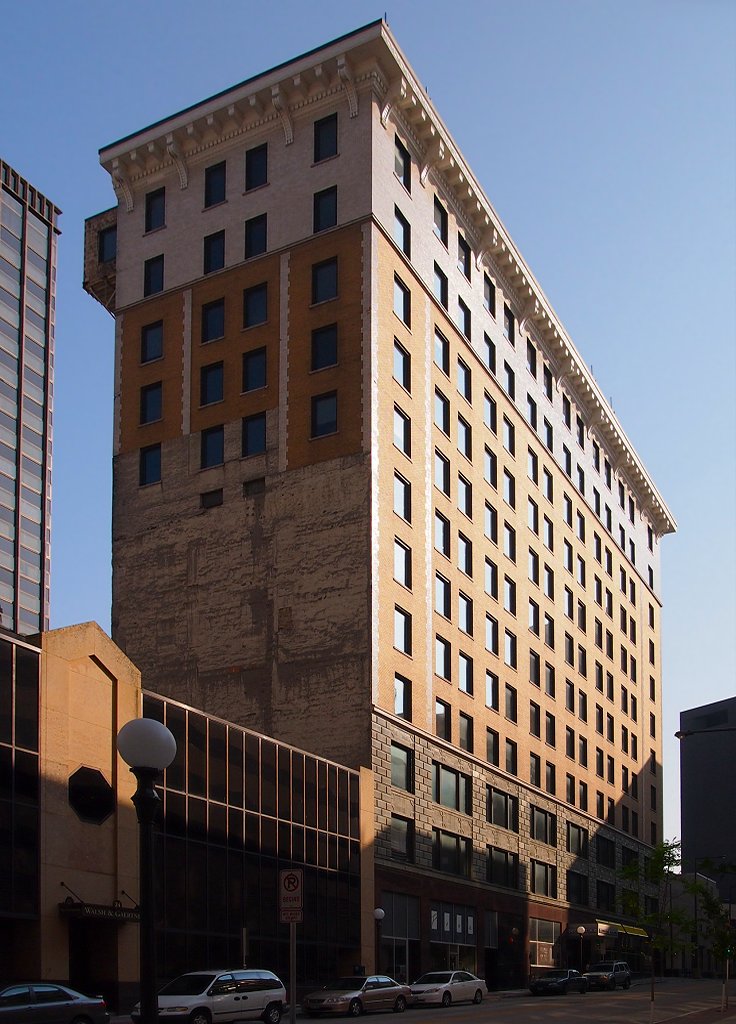 Opened in 1912, St. Paul's Commerce Building initially served the Commercial Club of St. Paul (established, 1891) and the offices of the St. Paul Association of Commerce. During the Gilded Age, most large urban centers had at least one formal commercial organization by the 1880s, which later evolved into Boards of Trade and Chambers of Commerce later on during the twentieth century. Commercial Clubs mainly looked to maintain a civic culture that proved friendly to businesses. The building stands as a reminder to a time when cities competed for commercial growth, as well as a period where St. Paul proved more slightly more attractive to businesses than its neighbor, Minneapolis.

The period between 1880 and 1920 saw the addition of many new building types to downtown St. Paul. The skyscraper, while functional, also served as a sign of success, influence, and prominence. Minneapolis and St. Paul were in direct competition -- often as bitter rivals -- for new business, especially for convention business. Yet, for the vast majority of those forty years, St. Paul led the state in establishing relationships that advanced its commercial and economic prosperity, taking advantage of the city's proximity to the State Capitol.

The St. Paul Commercial Club formed in 1891, and in 1909 its members announced an intention to build a new headquarters. Not only was a centralized located desired, but also a consolidated organization. In 1911, the St. Paul Commercial Club and St. Paul Association of Commerce were among the nation's first to merge its organizations into a single building. However, the Commercial Club continued to function as an independent association after the merger. The Commercial Club members hired architect Hermann Kretz to design the new building. Construction of this historic building began in 1911, and its completion arrived quickly because the builders used slabs and reinforced concrete.

The grand opening of the Commercial Club was on September 9, 1912, followed by a week of festivities near the building. But, ten years after opening, during a time of economic decline from 1921-1923, the St. Paul Association of Commerce decided to forgo renewing its lease and moved out of the Commerce Building. During the Great Depression, tenant losses mounted in the building, and Minneapolis overtook St. Paul as the power-center for commercial activity. During the Depression and World War II, downtown construction slowed dramatically, and, during the 1950s, urban renewal projects led to the demolition of many nineteenth-century buildings; the Commerce Building was one of the few to survive. As is often the case with older downtown buildings during the late twentieth and twenty-first century, the building transitioned into an apartment complex in 2008.