The original Bee House was built in 1866, two years after the Booth family purchased the Four Mile House from Mary Cawker. Millie kept bees on the property, and in the 1890s expanded her beehives into a highly productive business. At least 120 hives were installed north of the Bee House. 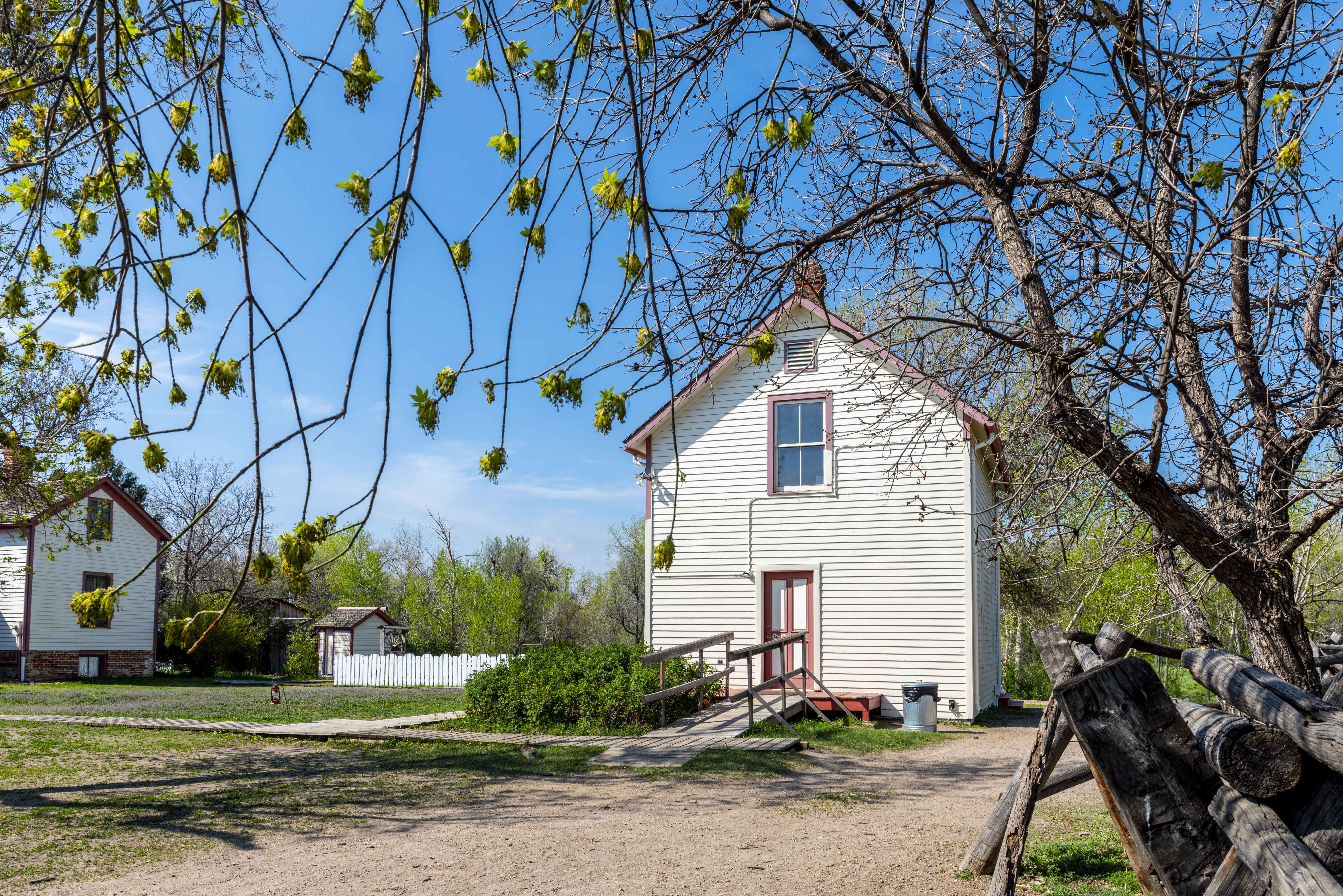 The original Bee House, showing many of Millie Booth's many beehives. Photo taken about 1890. 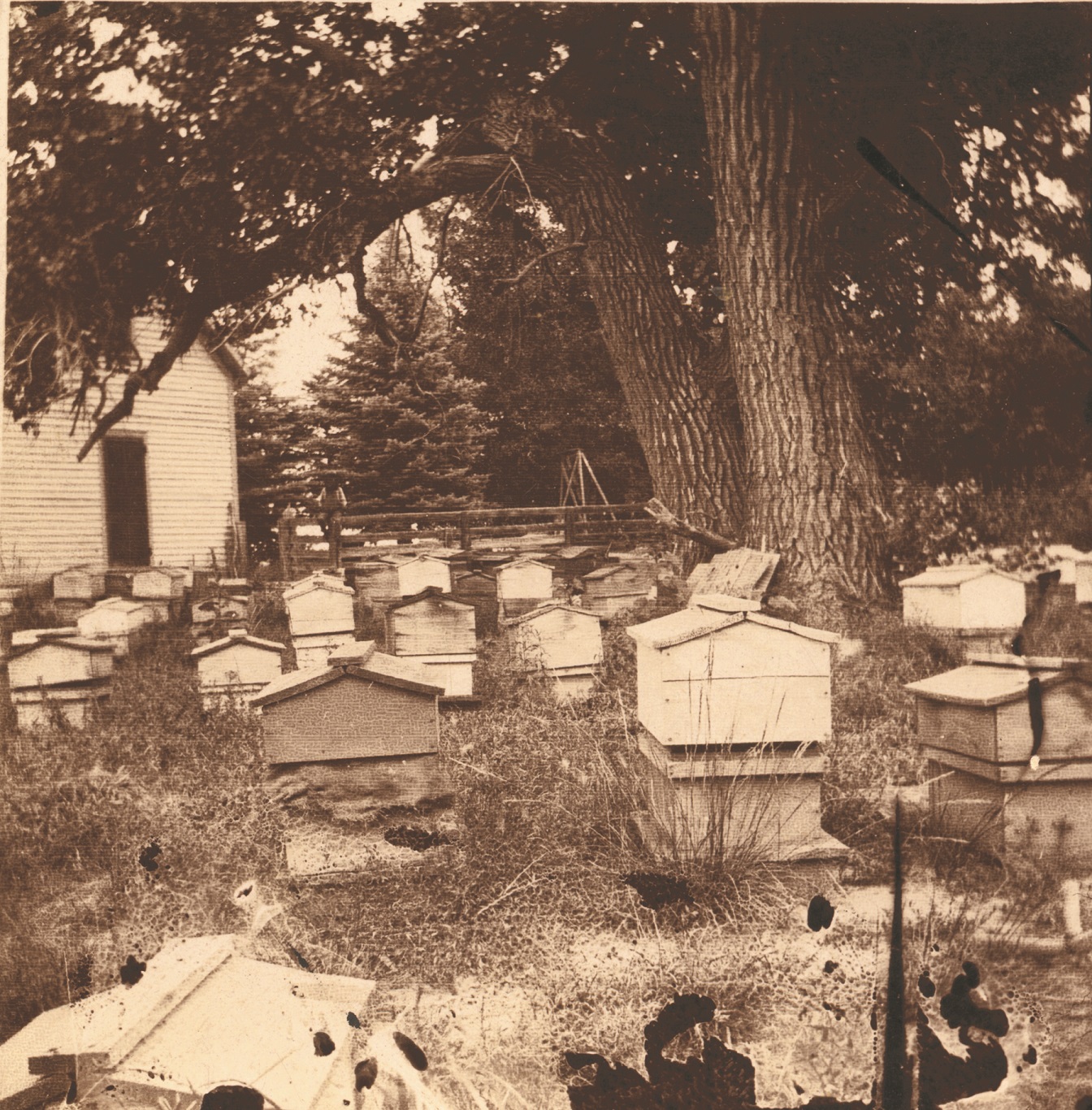 An announcement from 1893 advertising a beekeeper's picnic at a local church. Millie Booth's name can be seen on the committee list. 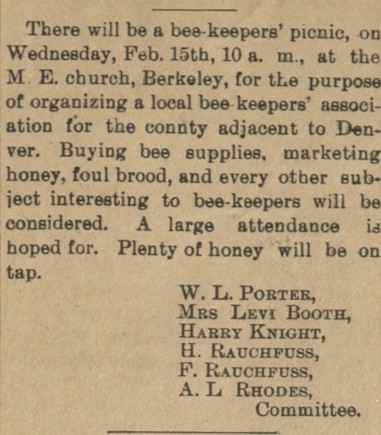 The structure would first serve as living quarters for hired hands, but would eventually become home to the centrifuge for Millie Booth’s beekeeping operation. The centrifuge separated the honey from the combs, and the honey was then collected into five gallon drums. This honey would be delivered to area grocery stores and other markets. Park stories state that one summer Millie sold at least four tons of honey, which would have made her at least $1,000. Millie would be awarded several times for her honey. She was a member of the Colorado State Beekeepers Association, which was established in Denver in 1880. Four Mile continues Millie’s beekeeping traditions with its own hives, which can be seen near the back of the property.

The original Bee House structure burned down in 1941. The building that stands today was constructed in 1980 using Booth family photos as well as archaeological evidence. It previously served as Park offices as well as a gift shop. Today it serves as a one-room schoolhouse for the numerous school groups that come to the Park, and as a staging area for crafting demonstrations during Park events.

Schools were very important to the early settlers in the Cherry Creek valley. In 1884, Levi Booth helped form the Maple Grove School, located on what is now the intersection between Leetsdale and Holly. This was likely on the Booth's land and so bore the name of their farm -- the Maple Grove Farm Dairy. Historical records held by History Colorado show that Levi paid teachers’ wages and reimbursed them for coal used to heat the building.

One room schoolhouses were commonplace in pioneer settlements. The schoolhouses would be very small and would often only go up to about the eighth grade. The earliest school districts would be established in Denver by 1882, and the first high school in Denver would be built downtown in 1873.

One teacher would teach all the grades. Teachers would often “board around” and live with the families of their students. There is evidence that some area teachers boarded in the Four Mile House the same time the Booth family resided there.