This statue, entitled “Leaping Into History,” was dedicated in 2007 and commemorates Oklahoma settler Nanitta R. H. Daisey who was a participant in the first Oklahoma Land Run on April 22, 1889. Known at the time as "Kentucky Daisey," Nanitta Daisey made newspaper headlines across the country when she leaped from a train to beat others to claim a plot of land. Using stakes and her petticoat, she marked off this land just north of Edmond Station. This statue was erected in 2007 as one of the official Oklahoma Centennial Projects, commissioned as a statewide celebration of Oklahoma’s 100th birthday. Kentucky Daisey’s daring leap into the Unassigned Lands exemplifies the pioneer spirit and an exciting event at the founding of Oklahoma. the statue also serves as a reminder of the way lands that had been promised to Native peoples were later claimed by white settlers through the actions of the federal government.

This monument both challenges interpretations that excluded the actions and perspectives of women while also reinforcing those that fail to consider Native American perspectives and experiences. 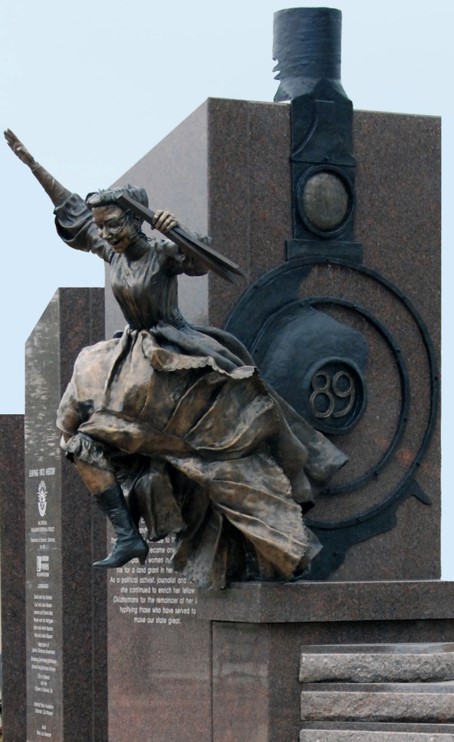 The statue is a reminder both of the active participation of women in Western history, as well as the devastating impact of the Dawes Severalty Act and the Homestead Act upon Native American tribes who had been granted the entirety of present-day Oklahoma by previous treaties. Oklahoma is unique in that settlers of mostly European origin claimed land that had been previously granted to Native tribes in a series of land runs. After Native American lands were consolidated under the Dawes Severalty Act in 1887, the remaining land was opened to settlers. The process of claiming land was organized in “land run” style, meaning at an appointed time, settlers entered the land, staked out their property, and claimed it as their own. Under the Homestead Act, if they lived on it for 5 years, built a home, and made improvements to the land (typically by farming), it became officially their land after filing their claim with government authorities.