This attractive building is the historic Hearst Free Library, which was built in 1898 and has operated as Anaconda's only public library ever since. It is an significant landmark in city, having served as an important cultural center. Its design also adds to its significance. The library is an exceptional example of Classical architecture, featuring a red-brick exterior, grand entrance with two granite Corinthian columns, arched windows surrounding the first floor, square windows on the second floor, pilasters (decorative elements that resemble columns) with Corinthian capitals, and a copper cornice (the top edge of the exterior walls). A four-sided clock also stands near the northwest corner of the building. The library is named after Pheobe Hearst, the wife of Anaconda Mining Company partner George Hearst, who donated money to build it. It was added to the National Register of Historic Places in 1973.

The Hearst Free Library was built by philanthropist Phoebe Hearst in 1898. 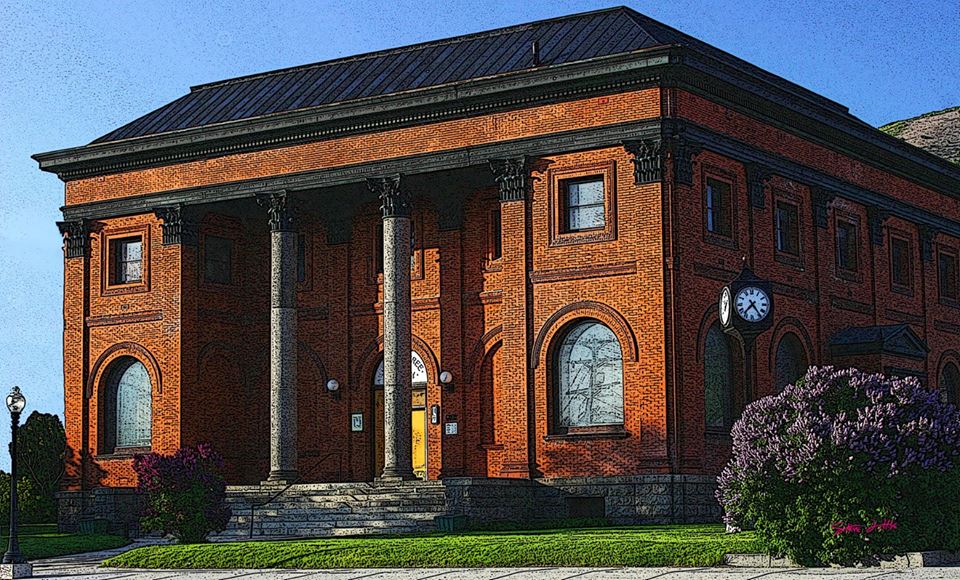 Phoebe (1842-1919) and George Hearst (1820-1891) were one of the country's elite couples during the 19th century. George was a wealthy miner who invested in a number of productive mining interests in the country, including the Comstock Lode and the aforementioned Anaconda Mine in Butte, which was developed by "Copper King" Marcus Daly. He also served as Senator from California between 1871 and 1891. He and Phoebe married in 1841. Their one and only child, William Randolph Hearst (1863-1951), would would go onto build country's biggest newspaper/media companies.

For her part, Phoebe trained to be a teacher and later became a supporter of women's rights and a philanthropist, especially in the area of education. While she and George never lived in Anaconda (they lived in California), she developed a connection to the community. She wanted to build a library so that residents here could have a place to learn, gather, and also admire art that she had acquired. She remained in charge of the library until 1904 when the city assumed control. Phoebe donated funds to many other places around the country including the University of California, Berkeley and the first free kindergarten in the country in 1877.