First established in 1868 by Antonio Joseph, the Ojo Caliente Mineral Springs was one of the first natural health resorts in the United States. Before it became a spa and resort, the springs were used by eight Northern Pueblo tribal communities as a scared site, a gathering place, and a place of healing for almost 3,000 years. Joesph began the development of the springs with the construction of the first bath house on the property, and his administration and ownership of the springs lasted until 1929 when M.E. Lathrop acquired the property. In 1935, the springs were purchased by Frank Samuel Mauro Jr. In 1985, the site was listed on the National Register of Historic Places for the well-preserved state of the contributing buildings that make up the property and its contributions to the Taos community. Currently, the site is known as the Ojo Caliente Mineral Springs Resort & Spa, and visitors can come and relax in one of the various mineral pools at the resort. Also, visitors can also receive spa treatments, stay in one of the several accommodations options, and participate in activities, such as yoga, hiking, and biking.

The Overview of the Ojo Caliente Mineral Springs Resort & Spa 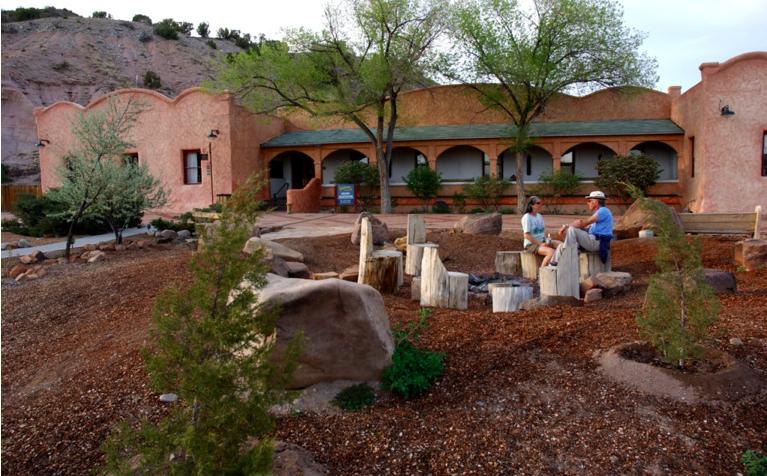 Entering into Paradise: an Archway at the Spa 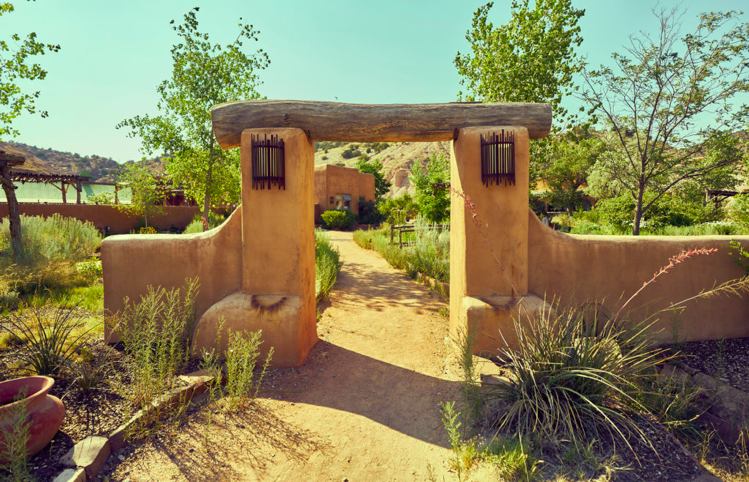 Blast from the Past: The Ojo Caliente Mineral Springs 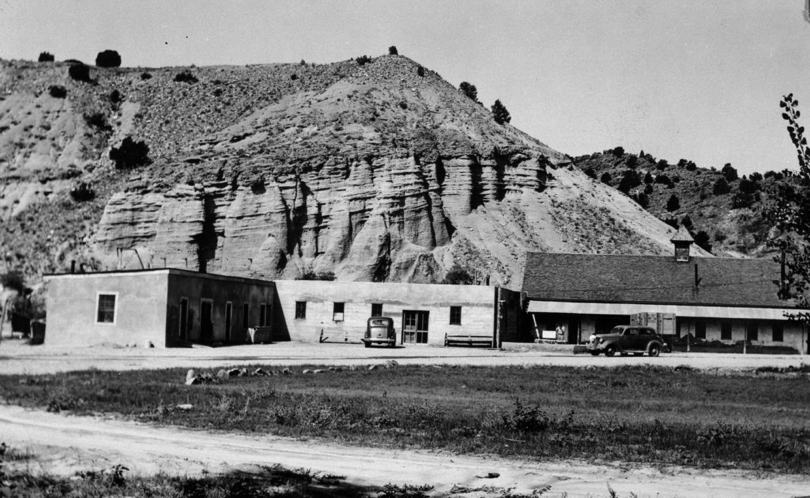 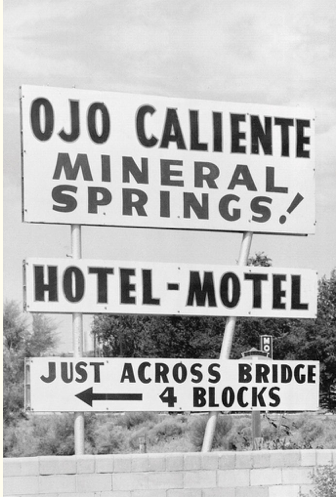 One of the Many Little Fountains at the Springs 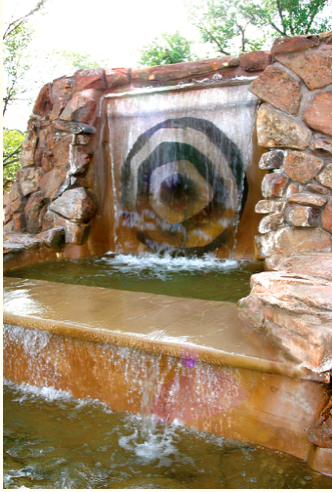 The Center of the Springs 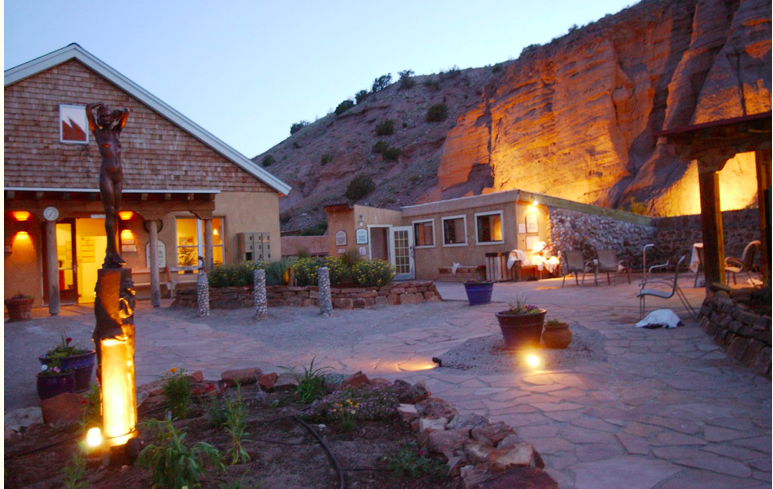 Sleep in Style: One of the Many Rooms at the Springs 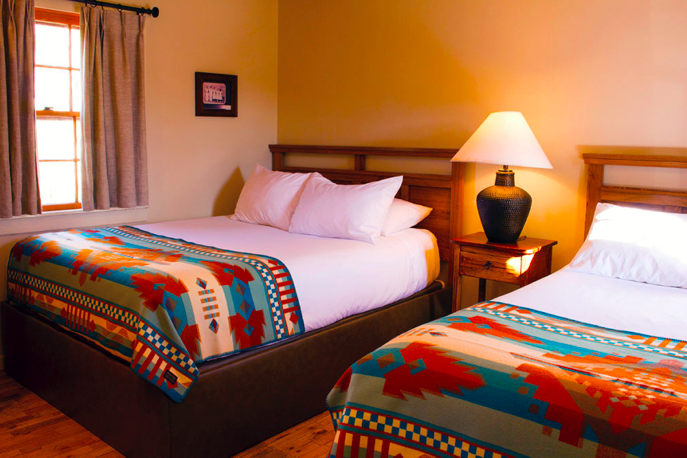 Swim in Style: One of the Many Pools at the Springs

Before the Ojo Caliente Mineral Springs was opened, eight eight Northern Pueblo tribal communities utilized the site as a gathering place, a sacred site, and even a place of healing. The usage of the water can be traced back to the ancestors of the Native American Newa tribes, and they have built pueblos terraced gardens overlooking where the springs are currently located. Many people from the tribes would use the water to heal their wounds and ailments. The largest pueblo of the area was the Posi or Poseouinge, which is translated to "village at the place of the bubbling hot spring." The pueblo was discovered through 15th century archeologists, Adolph Bandelier and Edgar Hewitt. When the Spaniards came to the area, they dubbed the place, Ojo Caliente ("warm eye" or "warm spring") because of the water's warmth, and they believed the water was a gift from the gods. Spaniards would also use the mineral springs for their own recreational The Spaniards attempted to colonize the area, but failed due to the Comanche tribe; the Spaniards would retreat back to the safer settlement of Santa Fe.

There are no records of when Antonio Joseph came to the area, but in 1868, he opened the Ojo Caliente Mineral Springs in 1868 with the construction of the property's first bath house. In addition to the springs, Joesph became New Mexico's first Democratic Territorial Representative to Congress. Under his ownership, Joseph built several buildings and features for the springs, such as a recreational building, five mineral springs, several mineral pools, an adobe hotel, an additional bath house, and a quadrangle plan. All of these features are still present. When Joesph opened the Ojo Caliente Mineral Springs, it became one of the first natural health resorts in the United States.

The springs were under Joesph's ownership and administration for 69 years until 1928 when it was purchased by M.E. Lathrop. The springs was then incorporated into Ojo Caliente Mineral Springs Corporation, which was ran by Lathrop, Felta Clare, and Jennie Diffenderfer. Under Lathrop's ownership, an additional bathhouse that is larger than the ones Joseph built. In 1935, after a series of internal corporate reassignments, Lathrop sold the springs to Frank Samuel Mauro Jr.. Under Mauro's administration, there were several building built that provide additional rooms and accommodation areas for guests. Lathrop and Mauro's renovations and features are still present alongside Joesph's.

In 1985, the site was listed on the National Register of Historic Places for the well-preserved state of the contributing buildings that make up the property and its contributions to the Ojo Caliente community. The site is a significant representation of the early commercial development in northern New Mexico's health, recreation and tourism industries. Today, the springs are known as the Ojo Caliente Mineral Springs Resort & Spa. Visitors at the resort can either receive a massage or participate in a spa package, enjoy one of the mineral pools or springs, or take a mud bath. In addition, people can eat and at the resort's Artesian Restaurant or the Wine Bar Lounge. Also, people can stay in one of several accommodating hotels, suits, and houses around the site. Additional actives the springs can offer are hiking, biking, birdwatching, yoga, and intention gardening. One of the biggest innovations that the springs has achieved is their commitment to the environment and water conservation through their use of geothermal energy technology and green building techniques, practices, and materials.