Selecman’s (also known as Snyder’s) Ford, formerly located on the Occoquan River between Fairfax and Prince William Counties, Virginia, was the site of several minor engagements during the Civil War. In addition to featuring in General J.E.B. Stuart’s Christmas 1862 raid, it was also the site of Confederate raids on December 19th, 1862 and March 22nd, 1863. The original ford was destroyed by the creation of the Occoquan Reservoir in the 1950s. Today, one historic marker stands near the reservoir in Sandy Run Regional Park on the Fairfax County side, and another is located near Antietam Elementary School in Prince William County. 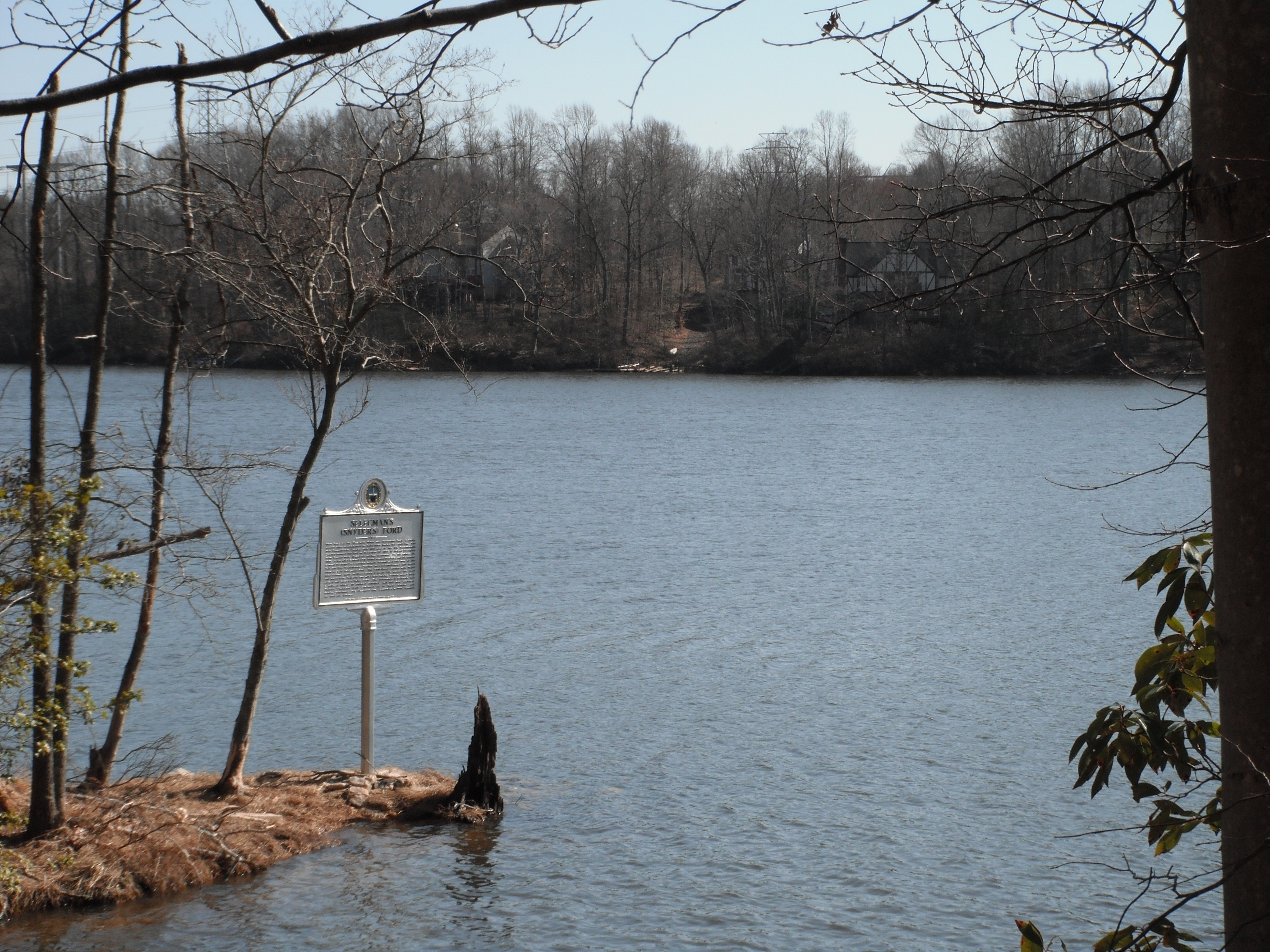 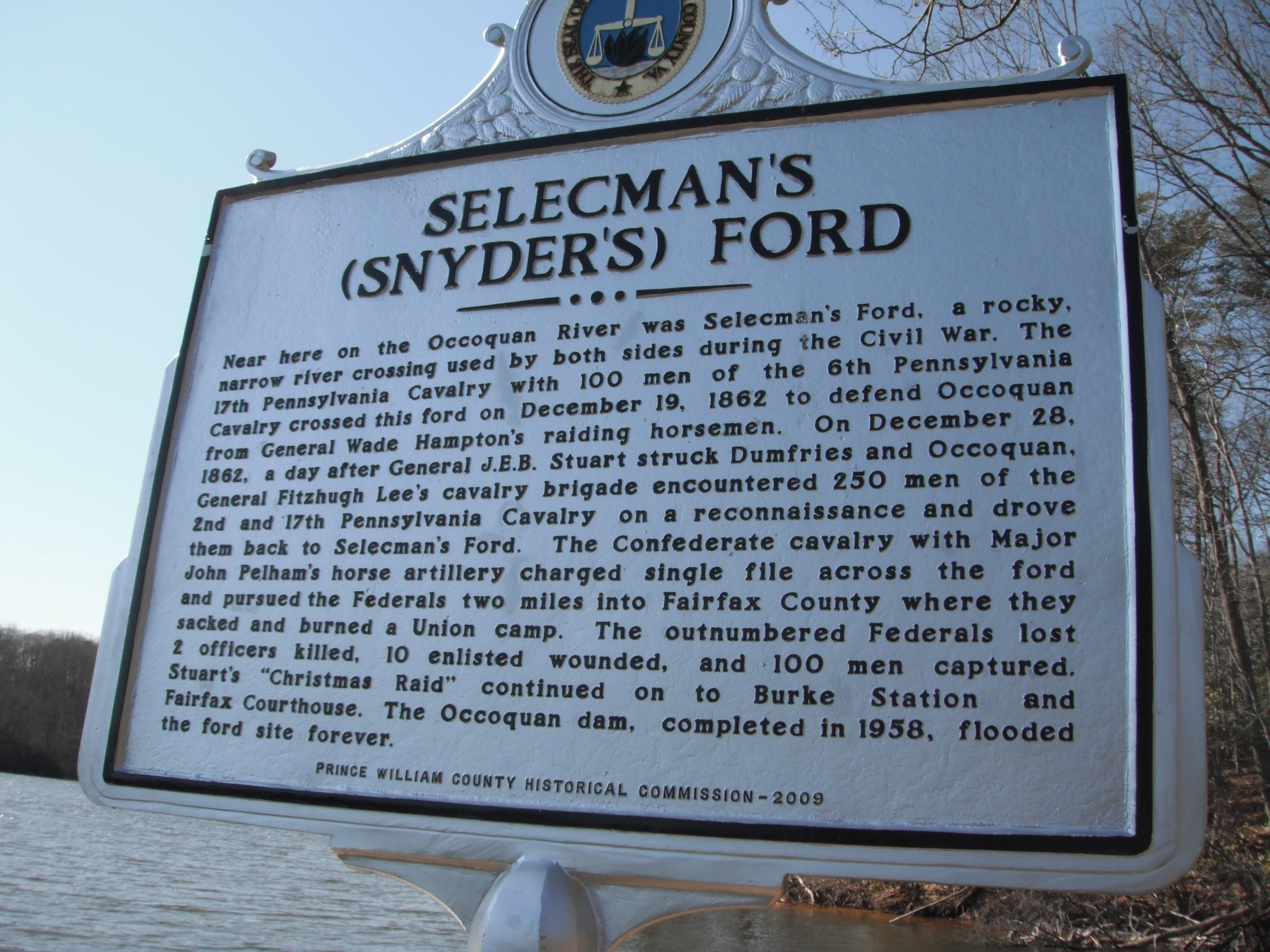 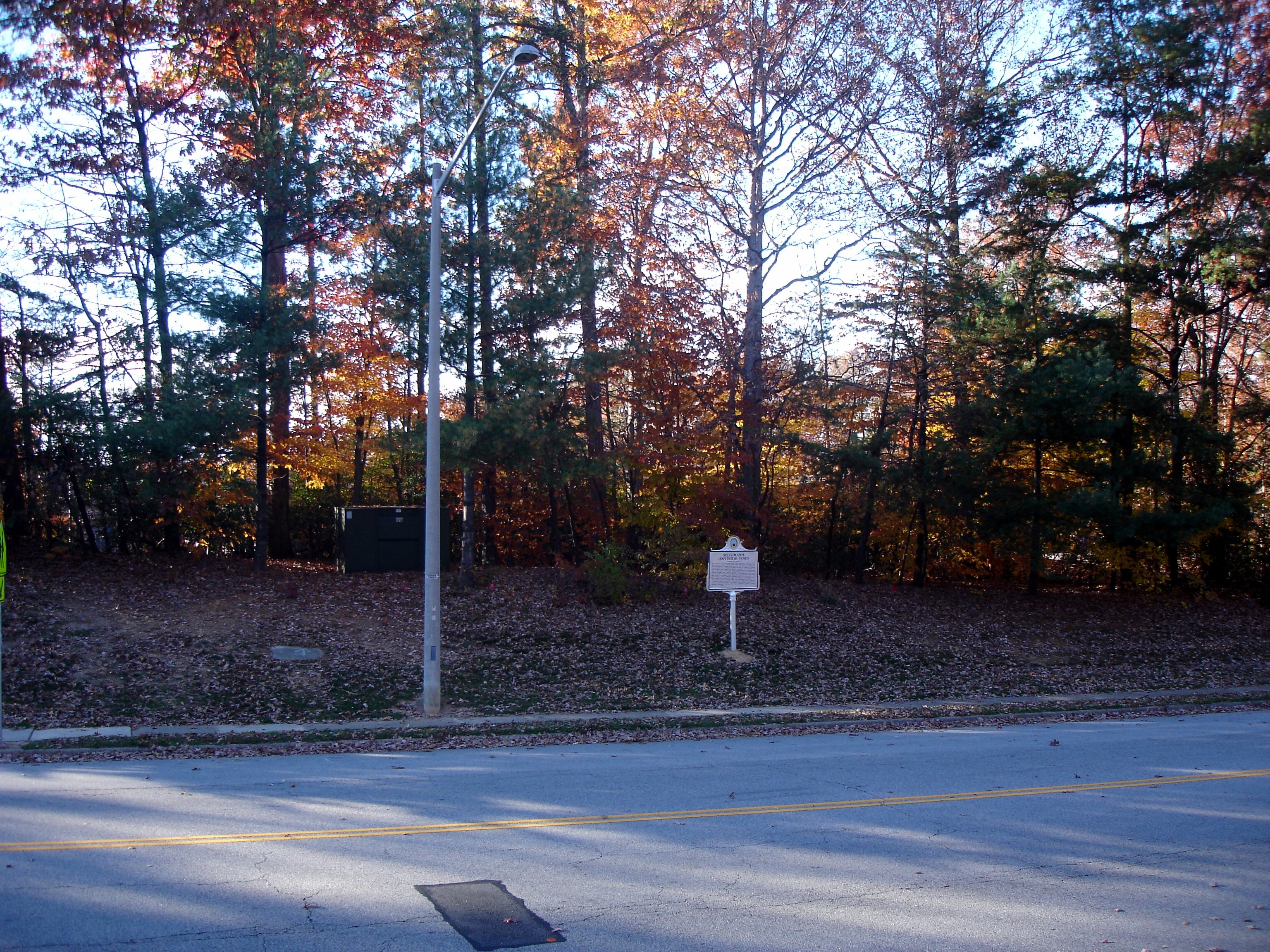 While the early history of Selecman’s (also known as Snyder’s) Ford is unknown, it was an important crossing by the time of the Civil War. The first known engagement there was on December 19th, 1862. The 17th Pennsylvania Cavalry, having just arrived from Washington, and a detachment of the 6th Pennsylvania Cavalry had interrupted a Confederate raid by cavalry troops from the 1st and 2nd South Carolina, 1st North Carolina, and the Phillips, Cobb, and Jefferson Davis Legions under Brigadier General Wade Hampton. Hampton’s men had captured several Union supply wagons and were in the process of transporting them across the Occoquan Ferry when the Pennsylvania soldiers drove them into retreat across the river, forcing the Confederates to leave twelve of the wagons behind. However, they had already managed to burn the ferry boat, forcing the Union men to cross at what is referred to in the commander’s report as Snyder’s Ford. The Union forces were slowed by the unfamiliar territory and by their lack of experience (the men had only received their rifles in the last week and had never drilled). They still managed to drive back the enemy pickets and cross at the ford, then scout a five- or six-mile radius on the Occoquan side of the river. The advance guard caught up with the enemy’s rear about dusk on the road between Occoquan and Dumfries, where the Confederates were headed at a gallop. The Union troops did not engage and, after dark, recrossed the river and camped for the night on the Fairfax County side. The next morning, the commander sent scouts across the entire area but found no signs of the enemy.

The next conflict was only nine days later, on December 28th, during General J.E.B. Stuart’s Christmas 1862 raid. General Hampton, with the same troops as the earlier raid, drove 200 men of the 2nd and 17th Pennsylvania Cavalry from Occoquan, capturing seventeen men and eight wagons, on the evening of the 27th. The next day, General Fitzhugh Lee’s cavalry brigade and Major John Pelham’s horse artillery met a 250-man reconnaissance party of the 2nd and 17th Pennsylvania Cavalry under Captain Charles Chauncey and chased them across Selecman’s Ford and into Fairfax County. The Confederate forces chased the Union troops for two miles, destroying their camp, killing two Union officers, wounding ten enlisted men, and capturing 100 soldiers in the process.

The final engagement was several months later, on March 22nd, 1863. A force of around 27 men from the 4th Virginia Cavalry and 30-50 local citizens snuck across the river in the very early hours, arriving at the 2nd Pennsylvania Cavalry’s reserve picket post at Mrs. Violett’s farm at 3 AM. The Union sentry accosted the mystery force and, receiving an unsatisfactory answer, opened fire, wounding Richard S. Farrow, the raiders’ commander. Gunfire then broke out from both sides; at the end of the conflict, two Union men had been wounded and twenty were captured. Another soldier was shot and mortally wounded after surrendering. The Confederate force then withdrew to Selecman’s Ford, where they were attacked by the eight-man Union picket force stationed there. The pickets made a brave stand but were ultimately forced to retreat and let the enemy cross.

At 5 AM, Captain William P. Brinton’s detachment of the 2nd Pennsylvania, camped at Accotink, Virginia, received word of the attack and immediately set out to chase the raiders. They stopped at Mrs. Violett’s farm, then crossed the river with 100 men at Selecman’s Ford, believing they were close on the heels of the retreating rebels. However, once they had pursued the enemy as far as Bacon Race Church, Captain Brinton discovered that the Confederate force was still two hours ahead and at Brentsville, where, according to Farrow (who had been left behind and captured), they would be reinforced. Brinks sent a small scouting party after them but brought the majority of his tired men and horses back across the river to Mrs. Violett’s farm.

The ford site was flooded when the Occoquan River was dammed by the Alexandria Water Company in the 1950s. (The 30-foot and 70-foot dams, and the 2,100 acres - and billions of gallons - they impound, are now controlled by the Fairfax Water Authority.) Today, two identical historic markers commemorate Selecman’s Ford. One stands on the Fairfax County side of the reservoir in Sandy Run Regional Park, which is used for Olympic canoeing as well as national scholastic rowing competitions. It is usually only open to the public on regatta days; there is also no trail to the marker site. The other marker is located near Antietam Elementary School in Prince William County.