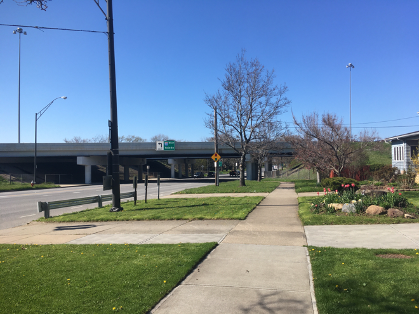 Graphic from the Plain Dealer showing the proposed path of the Northwest Freeway in 1962. West Boulevard is between the yellow lines.

Sanborn map of West Boulevard between Western and Lorain Avenues. All structures within the black lines were demolished to clear a path for I-90. The Relocation Advisory Assistance Program used 3088 and 3082 West Blvd as headquarters (marked in gray boxes). 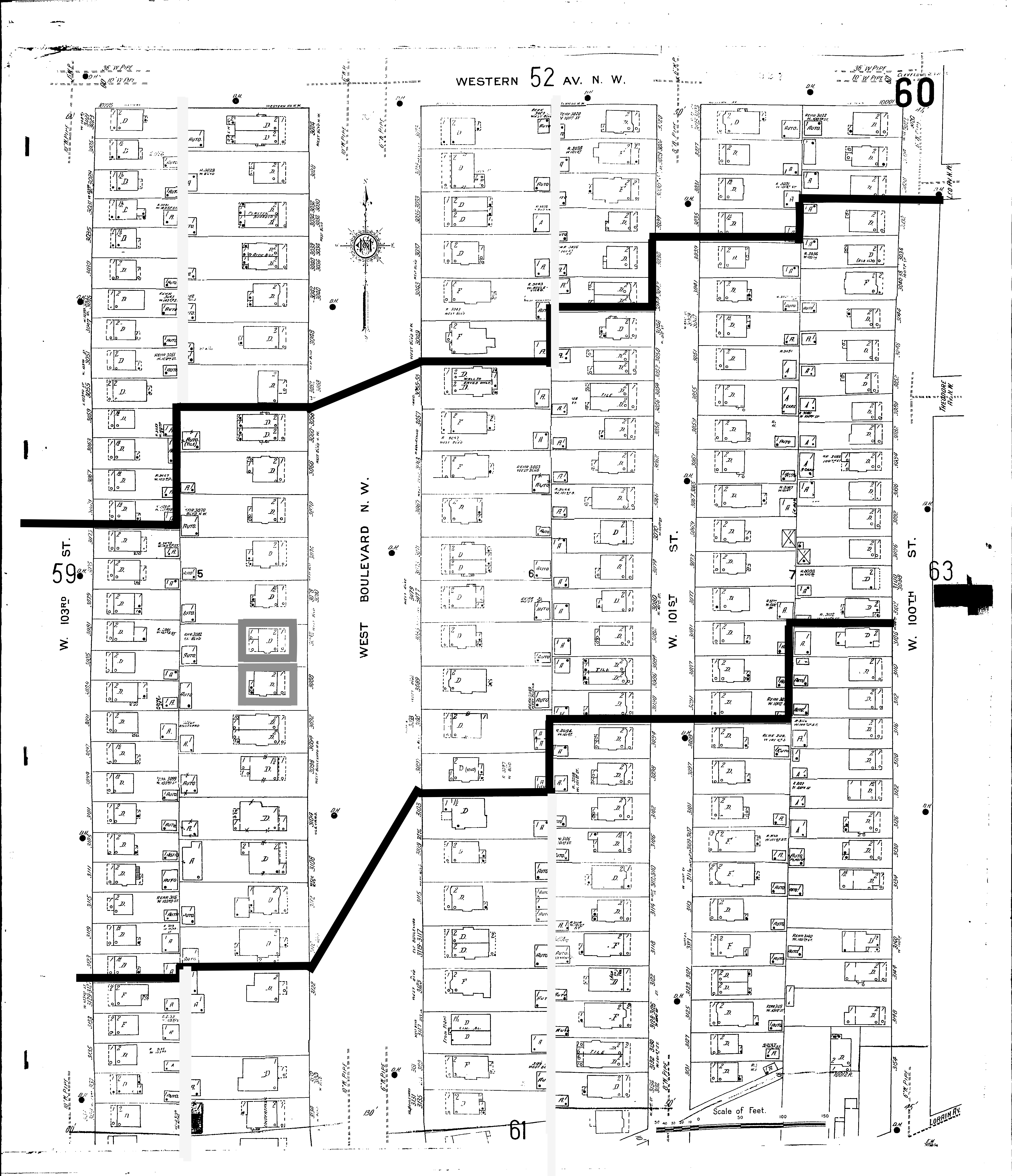 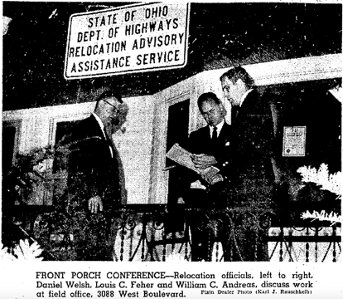 Images from the Plain Dealer of houses on West Boulevard. The original caption read: “Families in the two houses next to the relocation field office [3082 West Blvd], left, will be relocated in the Northwest Freeway program.” 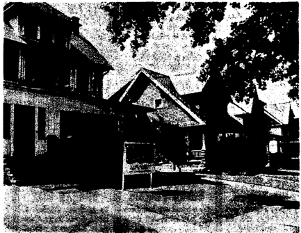 Before highways, cities were connected by two-lane roads that went through small and mid-size towns. The advent of highways brought speedy connectivity for automobile drivers, by then the most popular way for Americans to travel. In Cleveland, the advent of I-90 connected the city to a highway that spanned the United States; I-90 is also the main way to cross the city from east to west.

Twenty-three houses on West Boulevard alone were demolished to make way for the highway. The State Highway Department tried to soften the blow of displacement through a program called the Relocation Advisory Assistance Program (RAAP). Led by William C. Andreas, the relocation field office set up shop on West Blvd. In 1965 the office was at 3082 West Blvd, and in 1966 they moved next door to 3088 West Blvd. Both houses were within the portion of West Boulevard buried by the interstate. An article in the Plain Dealer, describes this unusual function for a typical single-family residence:

The large, two-story house at 3088 West Boulevard N.W. sits serenely in the cool shadows of the tall London plane trees that grace the thoroughfare. It looks like a perfect summer setting for a family reunion complete with red-and-white checked tablecloths, potato salad, squealing youngsters, barking dogs and lawn chairs laden with limp adults. Instead, the house at 3088 West Boulevard, in the summer of 1966, is a field office for Ohio’s Relocation Advisory Assistance Program (RAAP). A typewriter chatters away in the living room; banks of gray metal desks fill the dining area, and filing cabinets stand beside empty, built-in china cabinets with leaded windows.[1]

The RAAP gave families a maximum of $200 for moving expenses; businesses could receive up to $3,000 for intrastate moving expenses within 50 miles. The moving costs were based on the number of furnished rooms in a house. The State would pay $30 for the first room and $15 for additional rooms. Many of the people who relocated were elderly and moved into smaller homes or institutions. By the early 1970s, Cleveland expressways had displaced 19,000 people. On West Boulevard, by 1975 most—if not all—of the 23 houses had been demolished. The earliest demolitions began ten years previously in the mid-sixties.

Despite efforts to ease the relocation of Cleveland families, the State Highway Department continued to clash with the City of Cleveland. There were many disagreements about the placement of the interstate, and the prices of labor stalled construction throughout the process. The City of Cleveland argued with the state and federal government about who would pick up the considerable tab for the Interstate. For example, the 1.24 mile section between 121st St. to W. 95th St. (which bisects West Blvd) cost 32.2 million dollars to construct. The State and Federal government paid for the majority of the interstate, but the highway cost Cleveland in other ways. In 1976, Cleveland Mayor Ralph J. Park lamented how the highway had wrecked the integrity of Cleveland’s west-side neighborhoods and uprooted so many citizens. He told the Plain Dealer:

The exact cost of the highway to this city is almost impossible to determine . . . By our best estimates the cash out-of-pocket cost thus far is in excess of $4 million, not including the tax duplicate shrinkage or the loss of valuable parkland.[2]

Finally in 1978, after seventeen years, I-90 construction ceased. An opening ceremony was held just east of West Blvd on the marginal road by W 91st and 93rd St. Ohio Governor Rhodes offered remarks to a crowd partially made up of protestors. He was preceded by councilman John J. Lynch who took the opportunity to complain about how long the construction had taken and decry the damage done to Cleveland property. Rhodes claimed the dissent was politically motivated (the ceremony took place right before an election). But the anecdote serves a reminder that new infrastructure causes disruption and can have long-term consequences.

Today, Cleveland’s West Side reaps many benefits from easy access to the highway, but the physical disruption of the neighborhood was an irreparable loss for many west-siders. Parishes, school districts, and city blocks became divided. Long-time West Blvd Resident Tom Yablonsky noted that the before the highway, the approach up West Boulevard from the south looked like entering “Sherwood Forest”— a wide thoroughfare shaded by mature and graceful trees.[3] This vision of a green and spacious urban neighborhood, so coveted by Cleveland planners during the City Beautiful Movement at the turn of the century, was relinquished in the face of modern changes to travel, technology, and expectations about what makes a healthy built environment.