The Baldwin City Railway Station - also known as the Santa Fe Depot - was constructed in 1907 at the west edge of town. It was designed by the Office of the Architect of the Atchison, Topeka & Santa Fe Railroad. Passenger service to the station was discontinued in the mid-1950s, and the men's waiting room was converted into additional freight storage space. Freight service ended in the 1960s. The City of Baldwin City bought the largely-intact depot building in 1977 and completed some rehabilitation while retaining much of its historical design. The one-story buff brick building features limestone detailing and a hipped roof. The Baldwin City Railway Station was listed in the Kansas Register in 1982 and in the National Register of Historic Places in 1983. 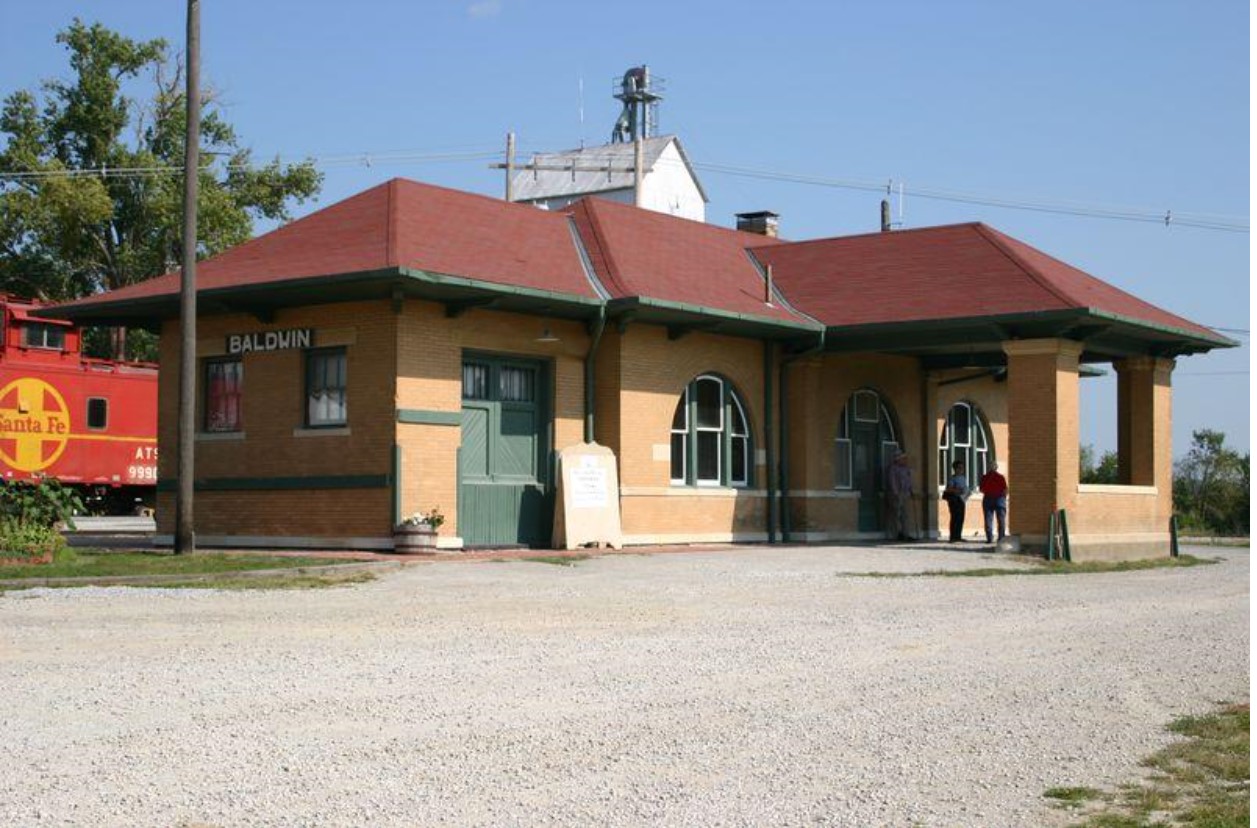 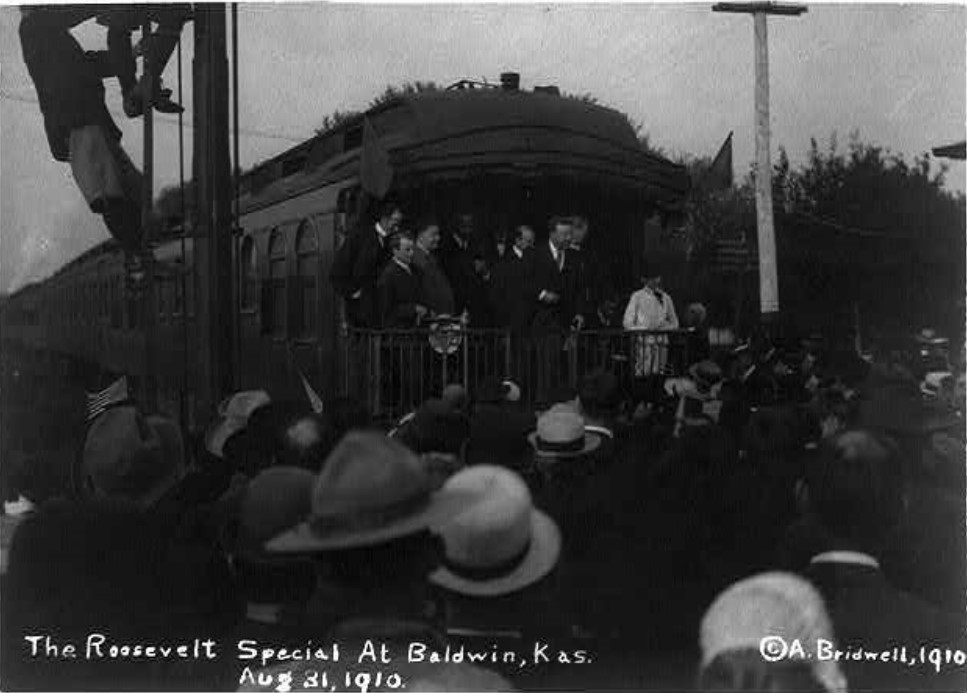 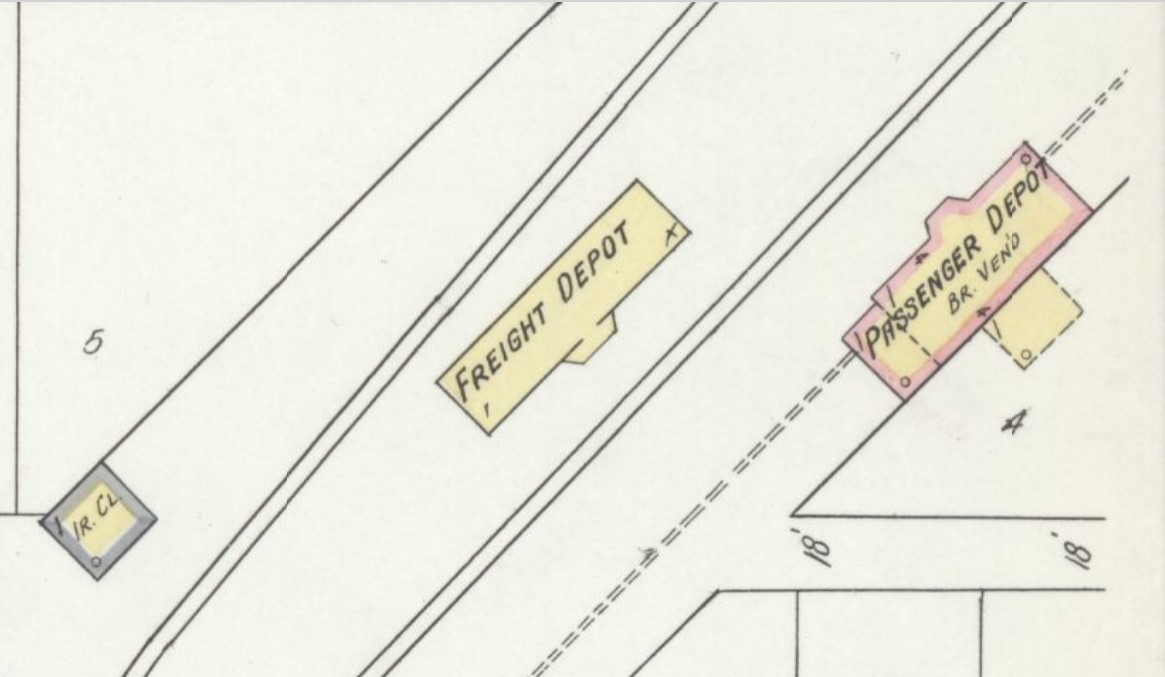 The mayor of Baldwin City made a personal visit to the railroad company's offices in Topeka in 1904 to discuss the inadequacies of the existing wood frame railroad depot in his town. What came out of that meeting with the Santa Fe Railroad was a promise that funding for a new depot would be included in the next year's budget. The new station was funded for $10,000 and construction was begun in July 1906 and finished in January 1907.

The one-story brick building is rectangular in plan with a hipped roof. Photos show that the original roof was metal shingles. The roof was covered in asphalt shingles by the time the city bought the structure in 1977 for one dollar to save it from being demolished by the railroad company. The porte cochere on the building's east side is where departing travelers would be dropped off. The porte cochere entrance led directly to the ticket windows. The building had separate waiting rooms complete with fireplaces and rest rooms for men and women, with the station master's office in the center of the structure. The freight room was in the far southwest corner. While a few of the windows in the freight area of the building have straight windows, many of the rest of the windows are arched and three-part.

The Baldwin City Depot served as the main entry and exit point for the city's passengers and mail. The depot served to host special community events, including the visit of President Theodore Roosevelt in 1910 and President Taft in 1911. The old, wood frame depot was still standing to the west of the new depot in 1912 and was being used for freight.

The Baldwin City & Southern Railroad formed in 2019 as a for-profit subsidiary of Midland. They lease the tracks to a separate company that offers train rides with dinner service on a restored train out of Baldwin City named the Kansas Belle. Some of the 22-mile round-trip rides on the 1940s-themed train include dinner theater performances. Shorter trips on Sunday afternoons include high tea. In the wintertime, Midland Railway's Polar Express runs from the Santa Fe Depot to Nowhere, Kansas. In 2020, the BC & Southern attempted to negotiate their own deal from the city for use of the station instead of paying the Santa Fe Trail non-profit; the railway offered to purchase the building at double its tax appraisal value of $23,000. The Baldwin City Council in turn has proposed ending the lease with the historical association and leasing to Midland Railway for one dollar annually. Also, the city would purchase the park and parking lot from the Santa Fe group for $100,000, paid at $5,000 annually for 20 years. This would keep the depot under city ownership and provide the for-profit rides to continue. The BC & Southern had been paying rent to the Santa Fe group at 35 cents per ticket, capped at $9,000 per year. The tourist train rides have been suspended indefinitely.

Per a City of Baldwin City spokesperson on August 2, 2021, all negotiations have ceased, although there is litigation pending.