This log courthouse was the only courthouse located between Independence Missouri and the Pacific Ocean for more than forty years. Lilburn W. Boggs was the governor of Independence at the time and was appointed to oversee construction of a temporary log courthouse in September of 1827; it was the very first courthouse of Jackson County. The courthouse, which is not in its original location, is also signficant for being where future president Harry S. Truman held court as Presiding Judge of Jackson County (1927-1935) until 1932. 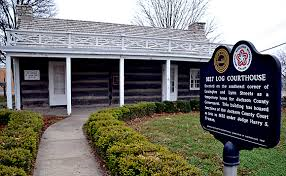 Contractor Daniel P. Lewis completed the two-room log building by the end of the summer in 1828. Apparently, slaves helped build it as well including one named Samuel Shepard. A new courthouse was built in 1836 and the log courthouse was sold to the first of its many owners. It was moved to a new location and restored in 1916. Another historic structure, the Aiken Cabin, was relocated just behind the courthouse in the early 1930s.