Erected around 1895, the Miguel E. Baca House served as the residence and the business headquarters for local merchant and prominent politician, Miguel E. Baca. The house was utilized for different functions, such as a salon, a store, and a dancehall, which were operated under Baca's guidance. The house exhibits a unique design with a hipped metal roof, two dormer windows on the roof, thick adobe walls, and three adjoining housing structures at the property. Throughout the years, there have been some renovations to upkeep the house's integrity. In 1978, the house was listed on the National Register for Historical Places because it was a prime example of turn-of-the-century New Mexican architecture where stores and residencies were combined into one building. 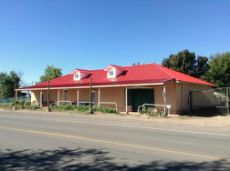 Born in August 1865, Miguel E. Baca was the third son of Matias Baca, the sheriff of Valencia, New Mexico and Silvestra Cháves. Matias, along with his brothers, worked in the farming and freighting business in the nearby village of Belen, and he was briefly in the New Mexican military. Miguel eventually took up an apprenticeship with his family's multiple business ventures in farming and freighting until he decided to make his own business. Miguel would cultivate various pieces of farmland in nearby villages, such as Tomé and Jarales. He even operated a small general store built into a small rented building in Tomé.

Around 1906, Miguel bought the house in Adelino, New Mexico from his neighbor, Rafael Chavéz for $270. The house was built in 1895, the house exhibited a traditional one-story New Mexican architectural design that fit with the commonality of residencies and stores or local businesses were combined into one building. When the house was constructed, communication and transportation facilities were still primitive, and the house is a prime example when small communities, such as Adelino had considerable importance as local commercial, social and political centers. The house was close to the Camino Real de Tierra Adentro, which was a route that connected New Mexico and Mexico during the periods of Spanish and Mexican administration. The road was a commercial contribution to the communities Adelino and other villages.

Baca's house was not only just his principle residency, but it also served as a salon, a general store, and a dancehall. The property has three adjoining structures: one for Baca's living quarters and salon, one for the store, and there was a separate building that served as his winery and vineyard. Baca's property covered approximately three acres, including the house and the farmland he previously acquired. The two doors in from to the house were for the store and bar/living quarters. In one part of the house, there was a summer kitchen where Baca would cook for food for the salon patrons. Outside, there used to be a barn with livestock, and near it, there is the dancehall, which still stands today. Behind the outbuildings, there used to be acres of produce and small vineyards, which were either sold at the store or used in the salon's dishes. Outside, Baca built a wooden gate for the property. While he maintained these small businesses, Baca also was a local political in the Adelino area.

Throughout the 20th century, the house had several renovations to its structure. Originally, the house had a flat roof, but later during the 1920s, it was replaced with a red metal hipped roof with two dormer windows protruding from the roof. Also, there were portals extending from the eastern and western facades of the house, but there were later removed in the 1960s, however, some of the original portals still remain. The house is mostly constructed from thick adobe, but later, cement was added to the foundation. Later, in 1978, the house was listed on the National Register for Historic Places for its well-preserved structure and its representation of New Mexican architecture at the turn-of-the century. Currently, the house is uninhabited and stands as a historic place.