Unfortunately, this car is no longer on site. In May 2021 Canonie Atlantic informed CCHS that in preparation for sale of the rail yard the track on which these two cars sat had to be cleared. As our siding was not long enough to accommodate them, we opted to sell them to a private railroad collector in Goshen VA where they will join his fleet of cars, which he plans to develop into a railroad museum. We have retained the photos and descriptions for general interest.

﻿Behind the flatcar sits our rare, steam-era former Southern Railway low-side gondola car originally built by Pullman in 1938. This car was a workhorse designed to haul and transport bulk goods. The gondola car came to the Museum in 2018 when the Bay Coast Railroad (BCR) ceased operations in Cape Charles. 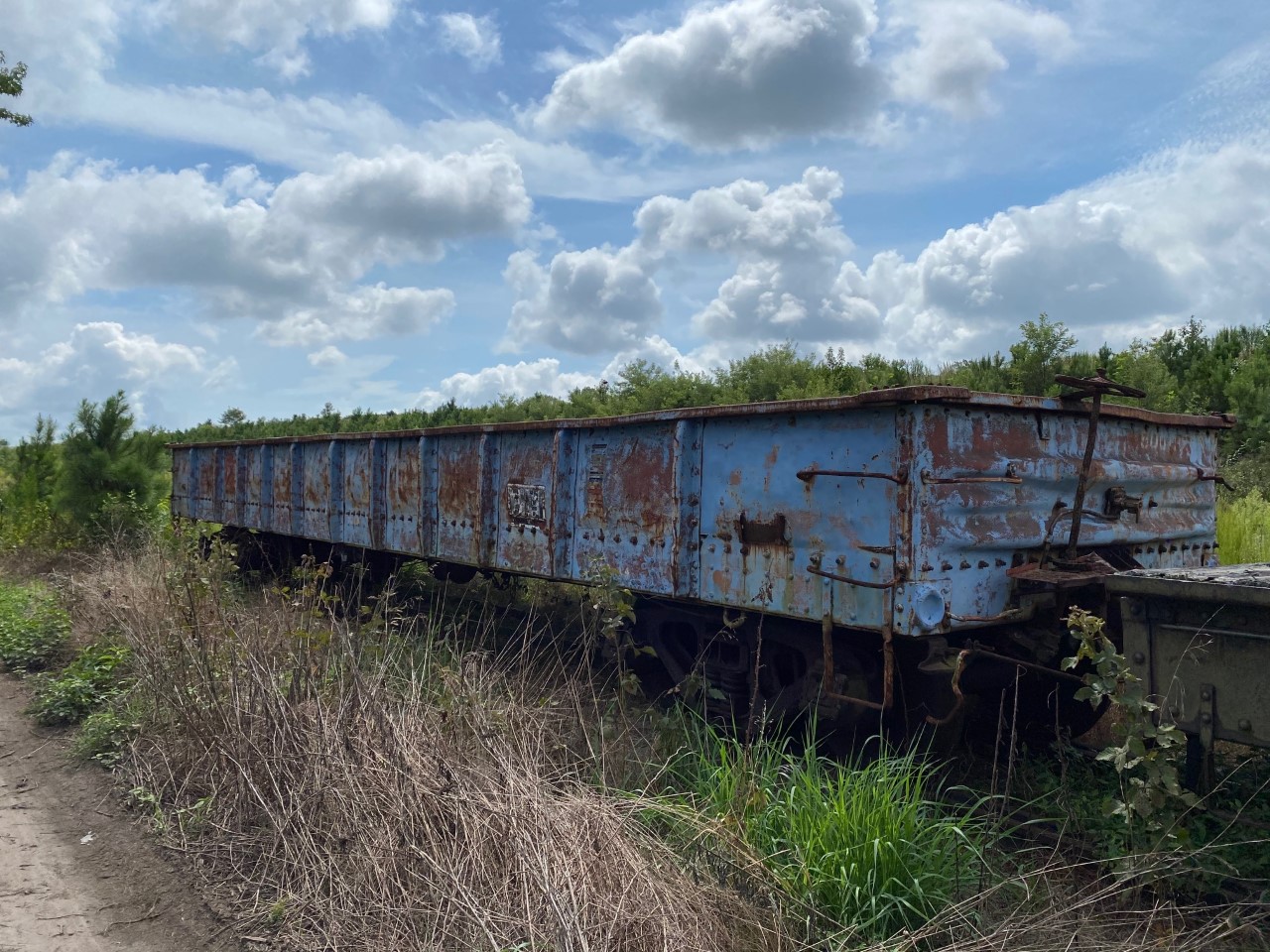 In US railroad terminology, a gondola is an open-topped railroad car with low side walls used for transporting high-density and loose bulk materials. It is a handy car for hauling all sorts of items, and all railroads had them. This gondola car dates from the 1930s and was acquired by the Eastern Shore Railroad in the 1980s along with 5 or 6 others. Here in the railroad yard it hauled tanks to spray track, moved tools and equipment around, and carried railroad track and ties to Pocomoke. It was also used as a 'reach' or 'spacer' car. Positioned between the locomotive and the cars to be loaded onto the car float barge, it enabled the locomotive to push them onto the barge without it having to come to the edge of the loading dock.

How did a workhorse railroad car acquire such a colorful name? By the early 19th century coal had become a major U.S. energy resource. Initially shallow draft flat wooden boats were used to float the coal down the Potomac River from the West Virginia coal mines to markets around Washington D.C. The boats were named gondolas after the famous shallow-draft Venetian boat propelled by a gondolier using a sculling oar. At its destination both the boats and cargo were sold, and the boatmen returned home by foot. With the opening of the Baltimore & Ohio Railroad in 1830 the railroad took over this coal trade, and the name gondola moved to the car designed by the B & O specifically for transporting coal. Early gondola cars were wooden and their contents had to be shoveled out by hand. In 1905, the Ralston Steel Car Company patented a flat-bottom gondola with lever-operated chutes that allowed the gondola to be unloaded automatically from the bottom. The chutes would direct the contents of the gondola to the sides, a significant innovation.

Gondolas have remained central to transport of coal. High sided open coal carriers used today are still called gondolas. Inside coal mines they are known in the U.S as mine cars, in the UK as tipplers or chaldron wagons. Gondola cars have also been adapted worldwide for a variety of specialty haulage tasks with a corresponding array of names: bathtub gondolas, track ballast gondolas, side tipping wagon gondolas, and hopper cars for those with the chute opening at the bottom.