Centralia is a borough in Columbia County, Pennsylvania that was settled in 1841. In the 1960s a fire was started in an abandoned mine underneath the town though the exact cause is disputed. While there was response on the part of the town and state there was no immediate panic. The town was evacuated in 1984 after health effects and unstable earth made the problem apparent. Since 1984 the state of Pennsylvania has worked to dismantle the town, though some residents remain. 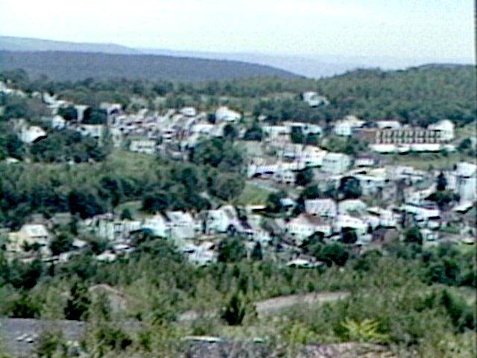 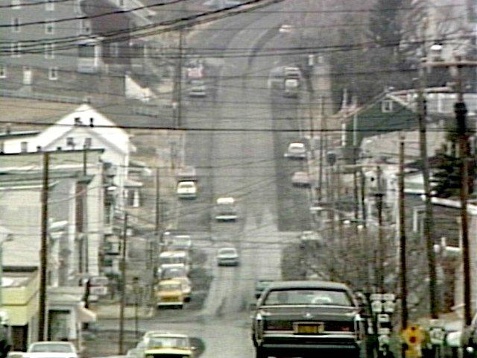 The fire that would cause most of the population to flee, visible from the surface. 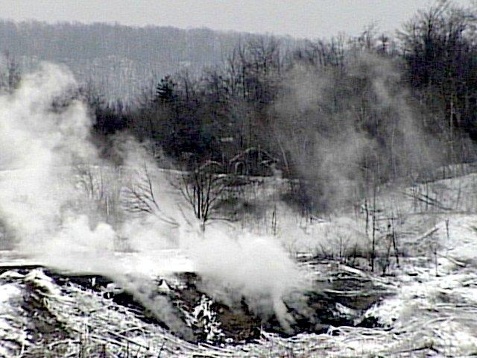 Sign warning potential visitors of the danger. Tourism of the area is discouraged. 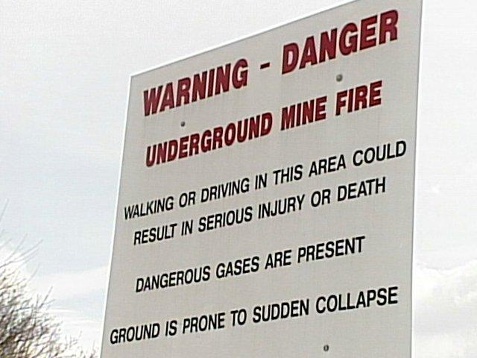 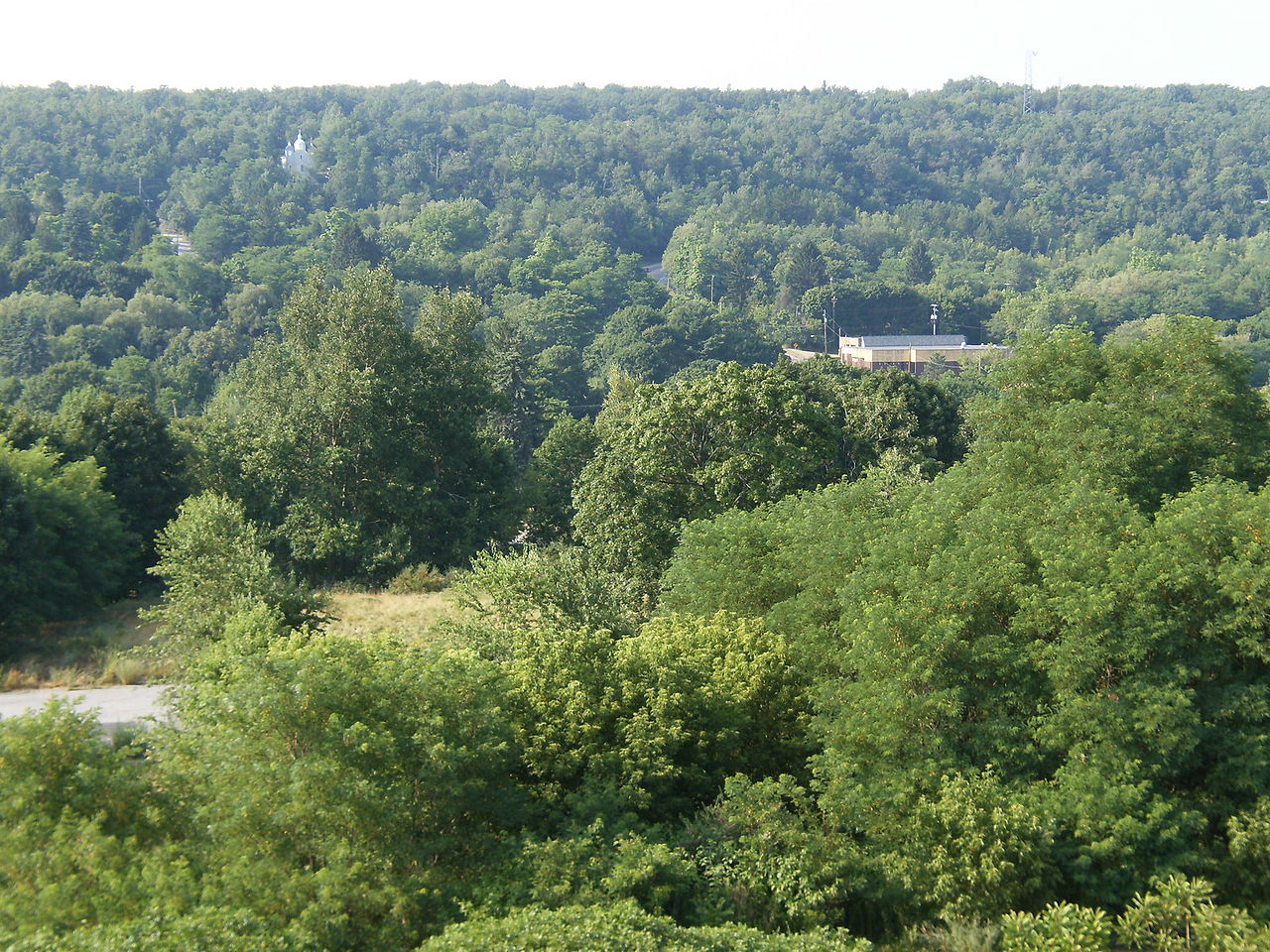 The land that became the town changed hands over several decades as various speculators hoped to profit from its coal deposits. Eventually it ended up in the hands of a mine company and rail road in 1854 that development of a mining industry began in earnest (Dekok, 17). The mining industry reached its peak in 1927, in the years following that production decreased dramatically. In 1950 the town of Centralia bought all mineral rights for the anthracite beneath the town in hopes of economic redevelopment. (DeKok, 19-20).

On May 27th, 1962, the mine fire that would make the town famous and eventually cause its evacuation was started. Local fire departments doused the fire as it appeared at a local land fill, and the fire was believed to have been extinguished that night. Two days later fire sprang up again, and the town formally asked the Lehigh Valley Coal Company for assistance. Over the next several months numerous efforts to extinguish the fire were enacted, such as pumping water and rock into the mines and suffocating it with incombustible materials. These efforts failed and the state ceased assistance in 1963. In 1979 a gas station owner reported high temperatures in his reserve tanks, and in 1980 harmful levels of carbon monoxide were released in various places around Centralia.(Quigley, 160-167). In 1981, a 12 year old boy nearly fell to his death in a sinkhole that formed in his backyard (O’Carroll, 5). In 1984 the U.S. Congress allocated funds for relocation and the majority of citizens left the town (DeKok, 258).

The cause of the Centralia mine fire has never been determined. The inherently difficult nature of determining the causes of fires is exacerbated further by the unique nature of such an expansive underground fire. The prevailing theories involve the towns various illegal landfills, which the town is believed to have attempted to dispose of via burning prior to the fire starting. Others claim that illegal dumping of still-burning coal embers the day before started the fire (Quigley, 8). A popular local theory at the time is that the Bast Colliery fire of 1932 eventually worked its way through tunnels and to the towns landfills (DeKok, 19-22).

Today the town of Centralia is almost entirely abandoned, with most citizens leaving in 1984 using the relocation money provided by the government. As of 2013 the towns remaining population stood at 8. The state of Pennsylvania pursued an eminent domain claim on the lands of Centralia and the surviving anthracite veins under the town since the 1980s, which the remaining members of the town contested in court. The courts found in favor of the residents in 2013, affirming their right to live in the town until their deaths and awarding a cash payout of 349,500 dollars. Upon the death of the final resident the states eminent domain claim to the mineral rights of Centralia will go into effect. (Rubinkam1-5).

DeKok, David. Fire Underground: The Ongoing Tragedy of the Centralia Mine Fire. Washington D.C.: Rowman & Littlefield, 2009. This 2009 book explores the causes of the Centralia mine fire, showing how local political corruption played a part not only in its origins but in the ongoing debates over residents within the town. Dekok's recounting of events is thorough with a heavy focus on the minutia of the events leading up to the fire and in the state's efforts and eventual abandonment of attempts to control the fire. O'Carroll, Eoin. "Centralia, Pa.: How an underground coal fire erased a town". http://www.csmonitor.com/Environment/Bright-Green/2010/0205/Centralia-Pa.-How-an-underground-coal-fire-erased-a-town. An examination of the state of Centralia today, and a reflection of the impact that complacency played in allowing the fire to spread. Quigley, Joan. The Day the Earth Caved In: An American Mining Tragedy. New York: Random House, 2007. Journalist Joan Quigley tells the story of Centralia in novel-like detail. This narrative focus does not cause her to forgo detail however, her recounting of the events surrounding Centralia are detailed and well-researched. Rubinkam, Michael. “Pa. residents living above mine fire free to stay” http://finance.yahoo.com/news/pa-residents-living-above-mine-200344503.html