This unusual house on Farragut Parkway was built in 1936 as a prototype home by Hamlin Foster Andrus, son of pharmaceutical executive John Emory Andrus of Yonkers. The Andrus family owned land in Florida, and the younger Andrus planned to develop a community of affordable homes on the property in the Sunshine State. To attract customers, Andrus decided to build a prototype home in Hastings-on-Hudson. The home was designed by architect David Horn, and was intended for simple living. The floor, outside walls and roof are made of pre-cast reinforced concrete produced by Yonkers concrete fabricator Louis Gelbman. Nothing came of Andrus's pland for a Florida community, and by the 1970s the Hastings house had fallen into disrepair. It was purchased and restored by a man who had watched the construction of the house in the 1930s and retained a lifelong fascination with it. 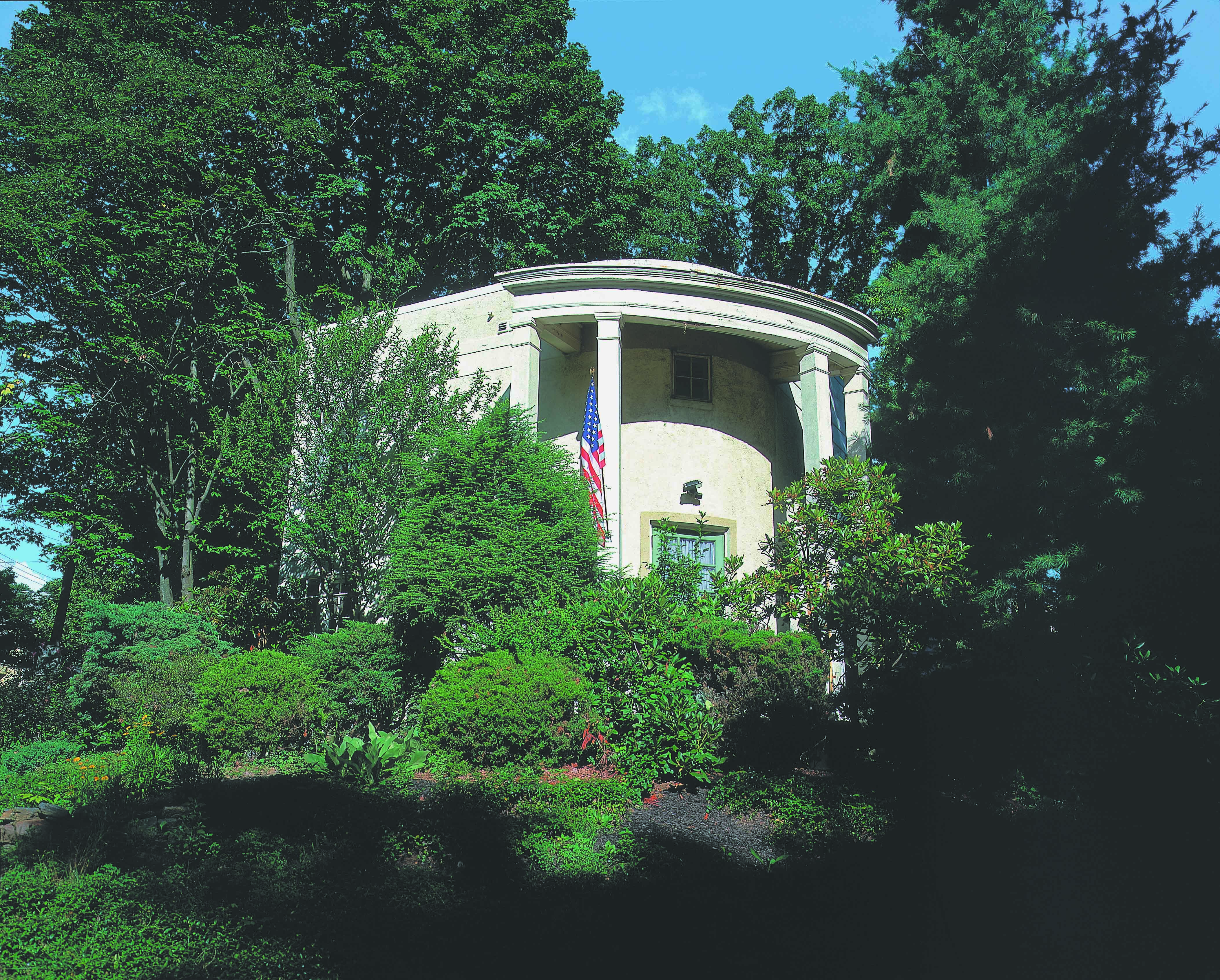 The Hastings Prototype House was the brainchild of Hamlin Foster Andrus (1885-1957). Andrus was the son of John Emory Andrus, a multimillionaire pharmaceutical executive who resided in nearby Yonkers. Hamlin Andrus owned a significant amount of land in Florida that he hoped to develop into a community of affordable homes. He decided to build a prototype home for this community in Hastings-on-Hudson.

Plans for the prototype house were drawn by local architect Charles A. Horn. The two-story house has a cinder block foundation reinforced by a partial steel frame. It is shaped like a cube measuring 21' on each side, save for the east corner of the building, which is curved. The entrance to this house is located at this corner. The exterior walls, floors, and roof of the house are comprised of prefabricated, reinforced concrete panels, each measuring 2' x 10'. Inside the house, cork and asphalt tile was used for flooring, plywood was used for wall panels, steel was used for window frames, and vermiculite was used for insulation. The first floor features a living room, kitchen, and closet. The second floor contains two bedrooms, a bathroom, and a closet.

Originally, the house featured several interesting mechanical systems. Its gas-fired heating system was one of the earliest uses of gas as a heating fuel in Westchester County. This system also had a cooling feature, which would have been useful in the Florida climate. Fluorescent lighting was built into the ceiling of the house's kitchen, which was a fairly early use of this kind of lighting technology. Sadly, all of these systems are no longer in operation, as they deteriorated significantly before the house was restored in 1978. The property also features a single-car garage that is made from the same prefabricated concrete panels that comprise that house.

Nothing came of Hamlin Andrus's plan to develop his land in Florida. The prototype house was sold, and for many years was used as a part-time home by its owners. Some neighbors were not particularly fond of the house, which stood out from the other dwellings in the neighborhood. By the mid-1970s the building had become neglected and abandoned. This situation changed in 1978 when Peter G. Muckenhaupt acquired the home. As a 10-year-old in 1936, Muckenhaupt, who grew up nearby, rode his bike to watch construction of the unique home, and his fascination with the building remained into adulthood. Muckenhaupt restored the long-abandoned structure, and worked to get it added to the National Register of Historic Places in 1991.