This four-bay, English ground barn was built sometime shortly after 1855, when the farm was settled to Adam Gossman Jr. It remained in the Gossman family until 1928, when it was purchased by Marion and Ida Bower. The Bower family made many improvements to the old barn, including a new roof that prominently displays the family name. The original wood shake shingles are still visible underneath. Miles and Melissa vonStein purchased the property from the Bower family in 2013 and use the barn to house steers and for hay/straw storage. (c.1850s-1860s) 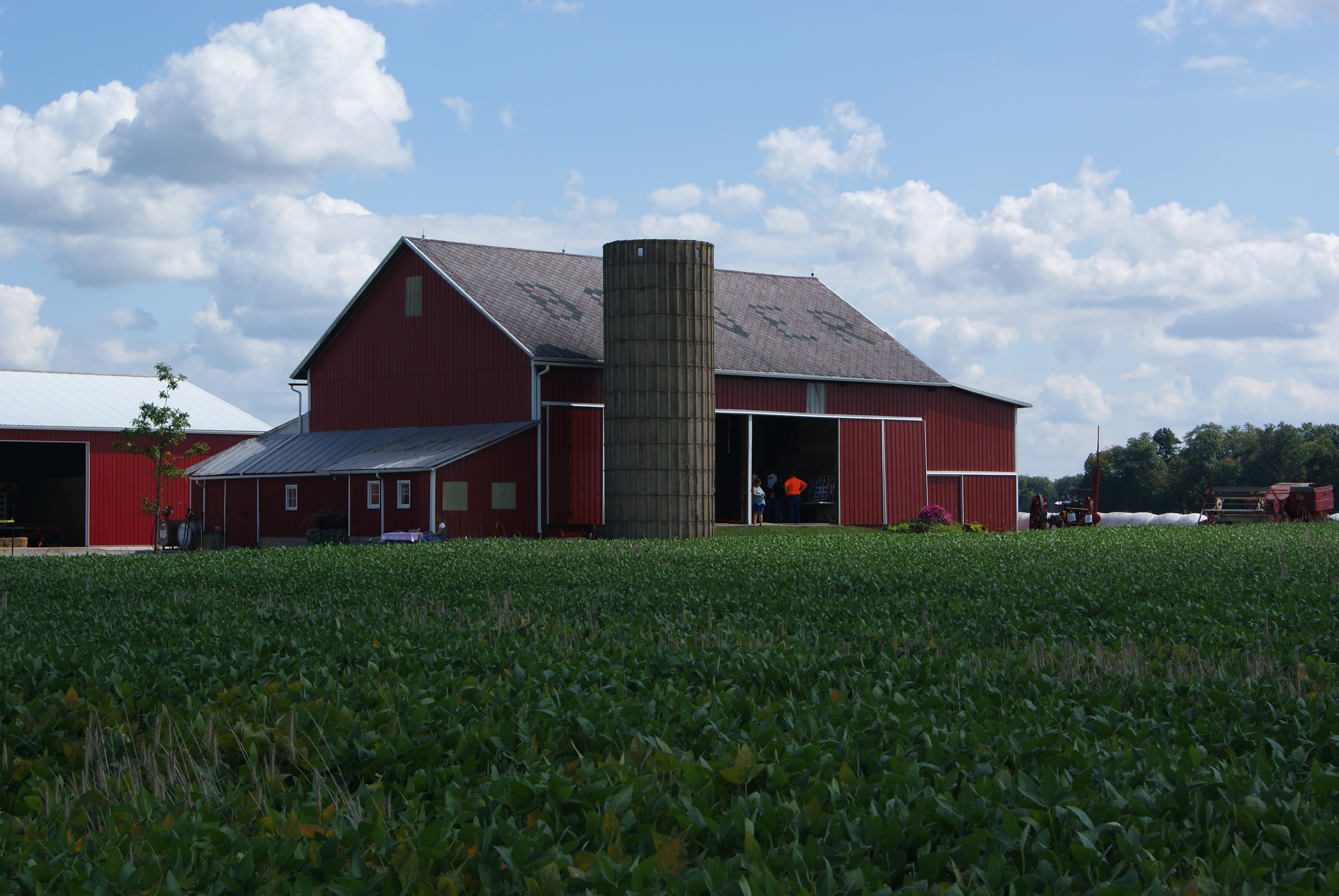 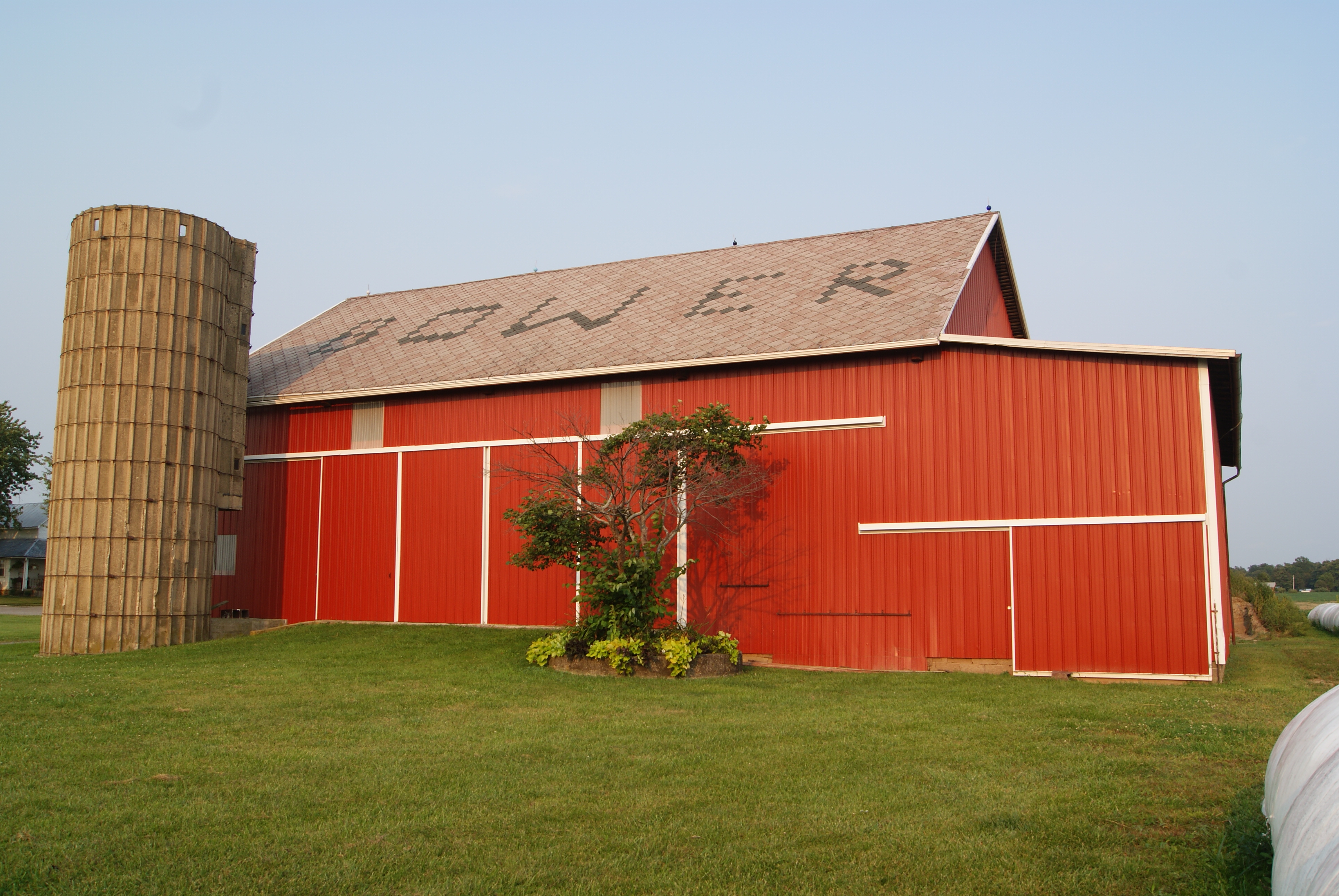 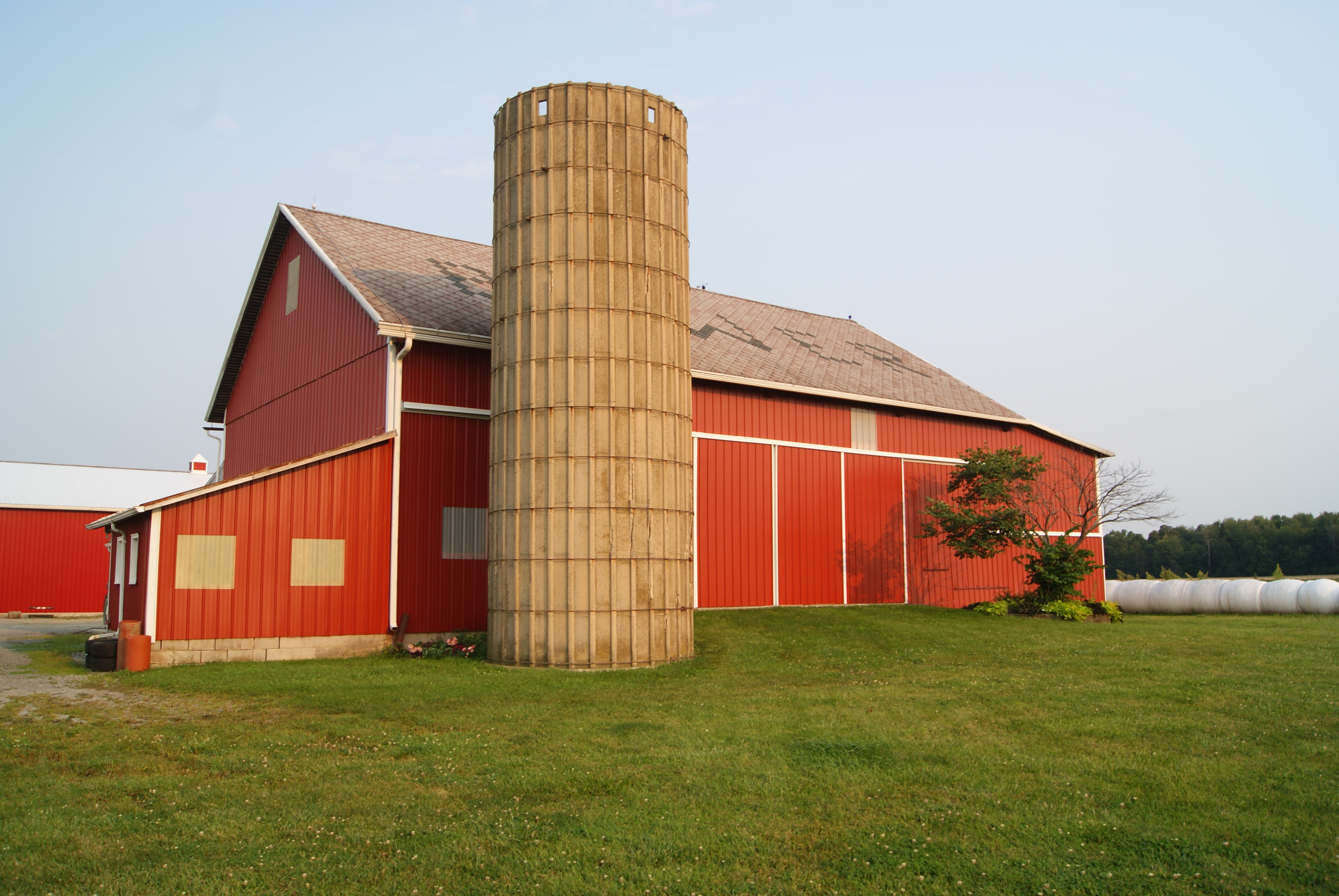 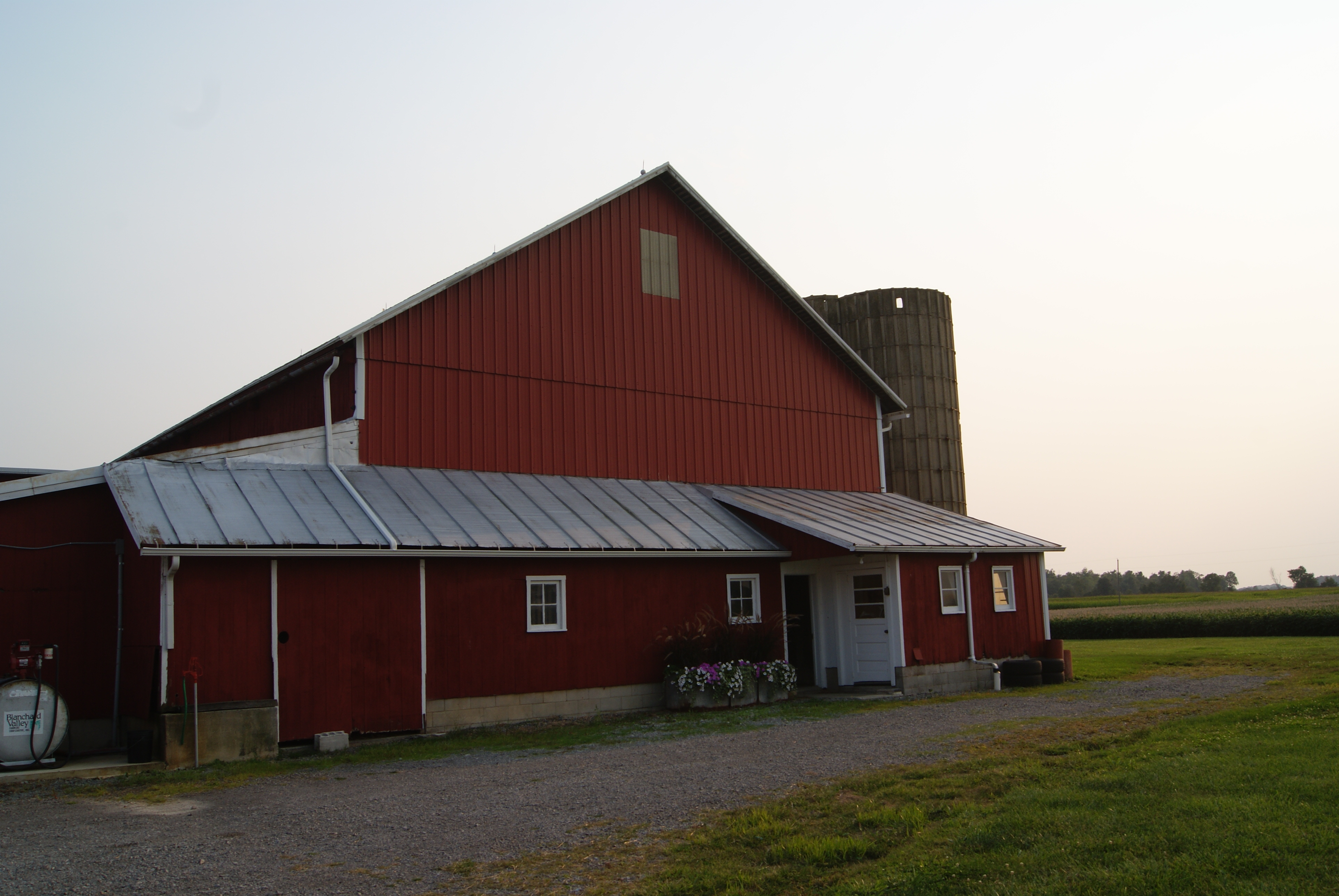 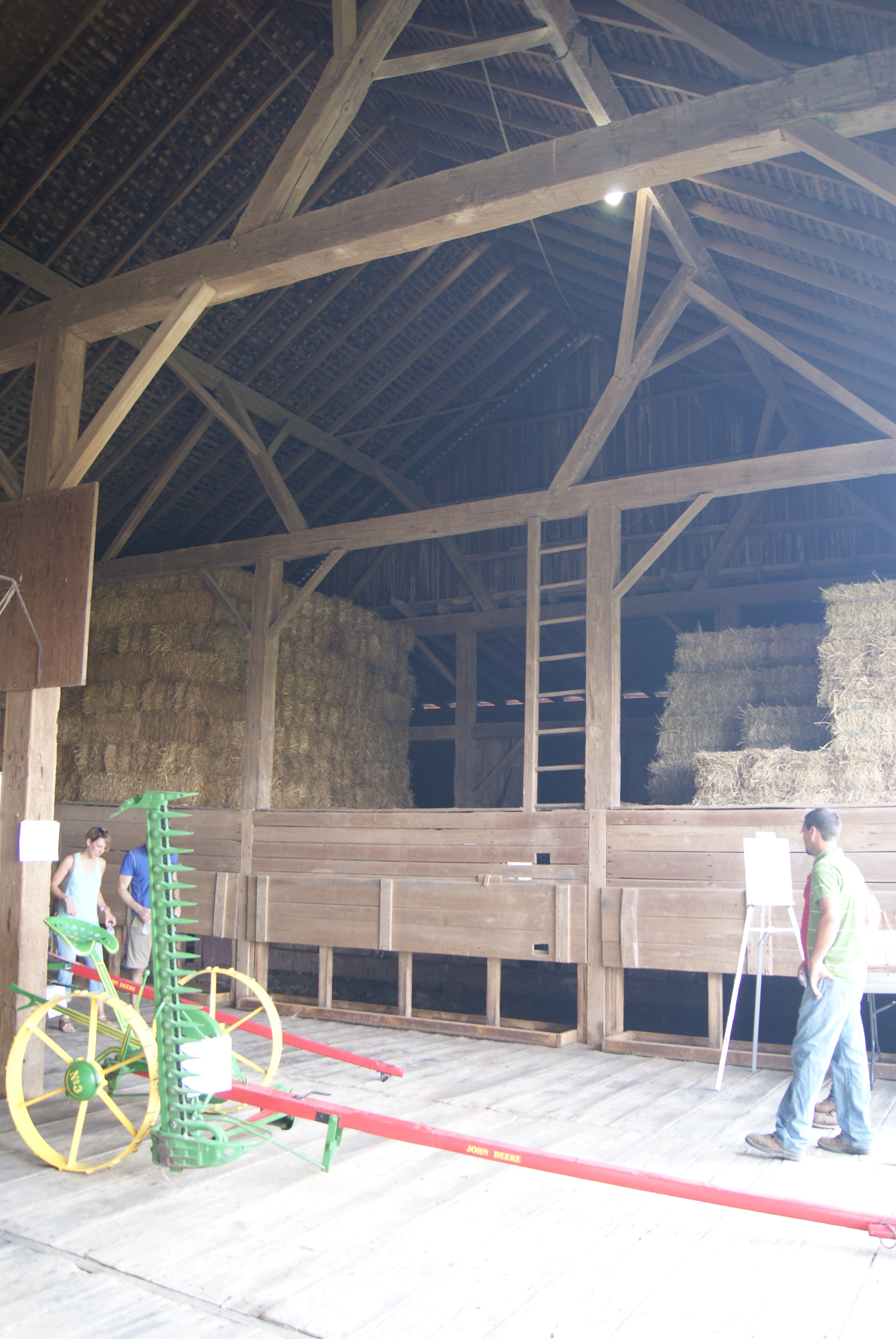 This four-bay, English ground barn was built sometime shortly after 1855, when the

farm was settled by Adam Gossman, Jr. It remained in the Gossman family until 1928, when it was purchased by Marion and Ida Bower. They owned the property until 1971, when it was transferred to their son, Carl and his wife, Ruby.

While it is still considered a ground barn, this barn is slightly raised to account for the high water table in this part of the state. It was designed with a double drive bay, so that a farmer could pull a team of horses through one door, circle around a center post, and exit out a second set of doors without having to back up. It is primarily hand-hewn, though some of the scantlings (smaller braces) are sawn. It is not uncommon for pre-Civil War and Civil War era barns in this part of the county to exhibit smaller pieces of sawn lumber, as multiple saw mills were accessible in this township by the 1840s. The addition to the south of the barn was added much later and is entirely sawn.

The Bower family made many improvements to this historic barn, including a new roof that prominently displays the family name. The original wood shake shingles and metal hay track are still visible from the interior of the barn. Stanchions can still be seen in the basement of the barn as well.

Miles and Melissa vonStein purchased the property from the Bower family in 2013 and currently use the barn to house steers and for hay and straw storage. As soon as they acquired the property, they quickly set to work making many changes and improvements. They removed some of the smaller outbuildings to make room to build a new barn, while still preserving the original. The larger dimensions of this new barn accommodate the contemporary (and much larger) equipment that Miles uses for farming today. The smaller dimensions of historic barns are often a barrier to preservation for farmers that feel the old barn is no longer functional. Miles and Melissa repainted the old barn, cleaned out the hay mows, and added new feed bunks for cattle. They also preserved another smaller timber-framed barn on the property, This structure is entirely sawn and likely dates to the early 20th century. Originally this barn was used to house hogs and was outfitted with a granary. The vonSteins repainted this barn and re-cemented the floor. Today, this smaller barn is where the horse is stalled.

Miles and Melissa have been dedicated to not only maintaining these historic barns, but to keeping them functional for their modern day farming operation—the key to preserving these impressive structures.