Warren G. Magnuson Park started life as a joint air base between the Army and Navy, created shortly after the first world war as an overseer for the surrounding construction yards and a facility to recondition and overhaul aircraft. The base was renamed and reassigned many times between 1920 and the 1970s and was then completely given up by the military in the early 1990s. On May 29, 1977, the property was reopened as Warren G. Magnuson Park, named after the U.S. senator. Today the 350-acre park consists of art, fields, a community center, trails, wetland preserves, and low-income housing.

Aerial photograph of Naval Air Station Seattle in the 1940s. 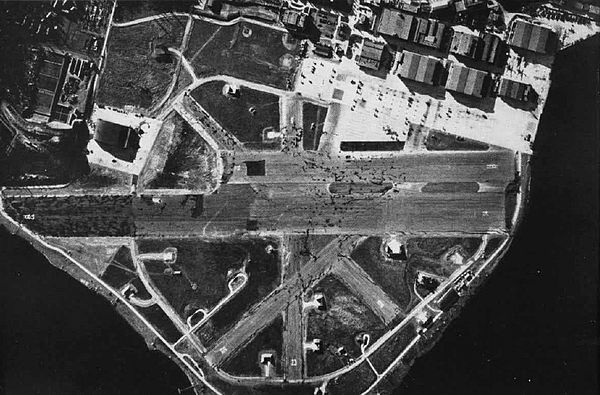 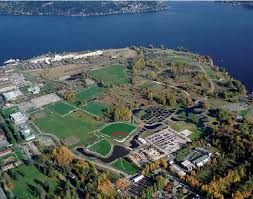 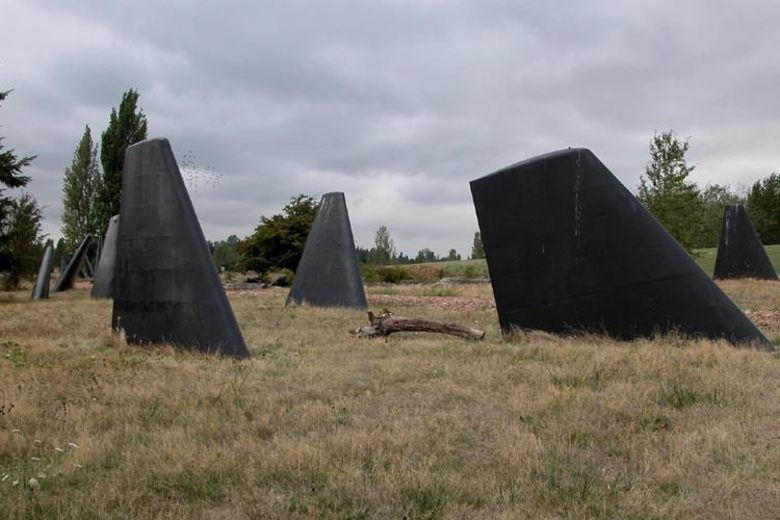 Once the United States entered WWI the Navy desired an airbase to oversee and protect the multiple other Naval bases and construction yards in the Puget Sound area. The Navy did not decide on a location before the end of the war, but a group of veterans lobbied King County for an airport on the Sand Point peninsula. They wanted this location because it is protected from floods, tides, obstructions caused by trees or power poles and it was accessible by rail or sea. The first plane landed at the cite on June 19, 1920. Construction was slow at first as the airfield could not be accepted by the navy without approval by congress. The initial construction was funded by King County and carried out by local Navy and Army officers. They created a dirt runway then later seeded it to create a more uniform surface. A joint congressional committee visited the property and decided on January 31, 1921, that it was the best option for heavier than air equipment, referring to planes rather than blimps. July 13, 1921, the Navy accepted 268 acres as a joint Army and Navy airfield. The airfield grew slowly over the next 19 years and eventually expanded into an aircraft overhaul facility.

During WWII Naval Air Station (NAS) Seattle could not be used to directly support combat because, just before the war, the citizens of Seattle had obtained a prohibition that prevented aircraft flying out of the facility from carrying bombs. Despite this Franklin D. Roosevelt granted the air station $4 million to improve and add facilities. By June 1941, the schools that were made were sending out aviation metal smiths, radiomen, and aviation machinists. The responsibility of arming aircraft for battle was fulfilled by the new air station on Whidbey Island, which left the job of servicing the aircraft to Naval Air Station Seattle. Operations at Sand Point boomed during the war years. There were as many as 8,000 people on the base each day. The base also was used as the head of operations for the weather, communications, and a terminal for naval air transport. At the end of the war, NAS Seattle’s operations were reduced, and its staffing was reduced to around 3,000.

The Navy announced the closure of the air station would occur in September of 1950. This plan was briefly interrupted by the Korean war. At the completion of the war, the station’s responsibility for aircraft overhaul ended. At this time, it returned to a training site for the Naval Reserve. The combat ready air station on Whidbey Island negated the need for NAS Seattle completely. The flight service ended at the station in 1970. Between 1982 and 1995 the base was re-designated twice and eventually was partially closed, and later completely closed as a military installment.

On May 29, 1977, the property was reopened as Warren G. Magnuson Park named after the U.S. senator. At this point, the Navy had already relinquished control over it, and NOAA had taken over 100 acres of it for their western headquarters. Nowadays Warren G. Magnuson Park sits on the 350-acre section of land, and has more than 4 miles of walking trails, play-fields, an off-leash dog park, and many art projects. It also has community gardens, a boat launch, swimming, and a community center. There Is also low-income housing in the park that consists of reconditioned buildings from it's military past.