Built to replace an earlier wood-frame church building that was destroyed by fire, the Universalist Society Church was dedicated in 1881. It served as a worship location for several congregations until 1966, at which time it was renovated for use as office and art gallery space. The building is the work of local contractor John Ross, who also built the Rochester Elevator and the Congregational Church building in Rochester, among others. 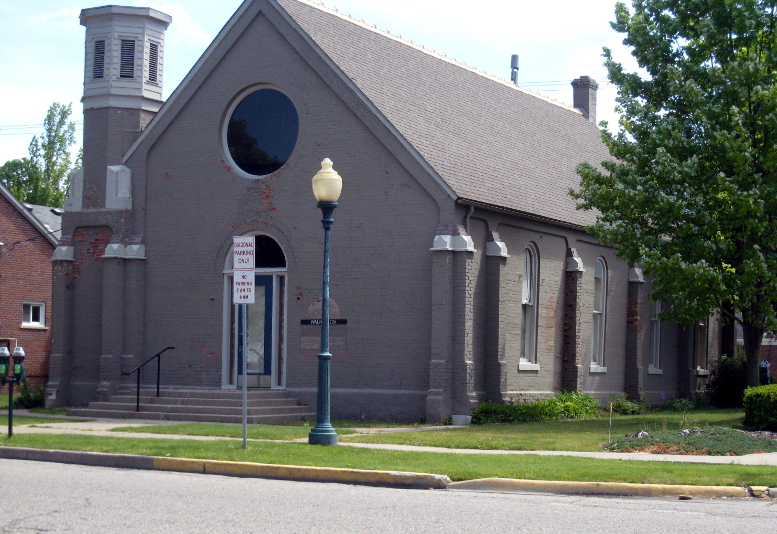 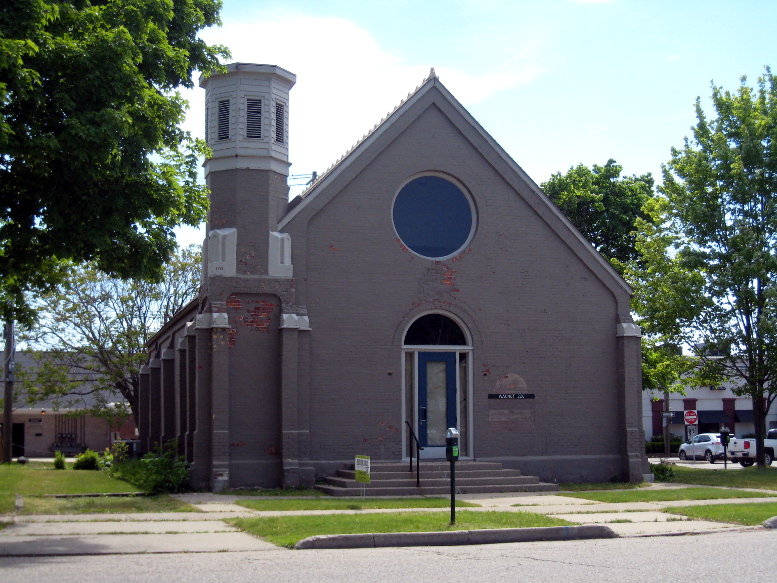 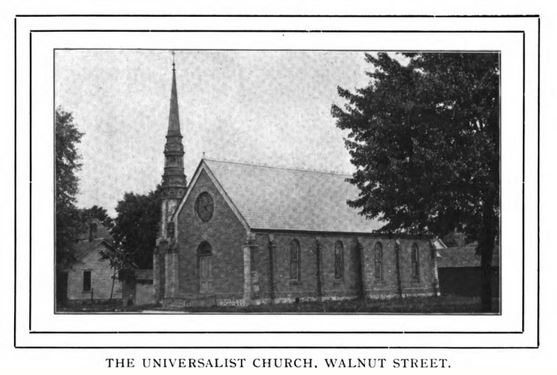 The Universalist Society of Rochester bought this property for $300 in January 1867 and built a wooden church building on it. The building was destroyed in a devastating fire on April 21,1880. The fire began at the Comstock House hotel on the southwest corner of Third and Main street. A brisk northeasterly wind blew hot embers onto the roof of the nearby Universalist church, igniting it. Rochester had no municipal waterworks at the time, nor was there an organized fire department, so the fires were fought, unsuccessfully, by citizen bucket brigade.

A few weeks later, the Rochester Era reported on the Society's plans to replace the burned-out church. On June 17, 1880, the newspaper noted: "The Universalist Society here at a meeting held recently decided to build a new church, to be of brick, 36x60 feet, with audience-room 36x40. The roof will be of slate and the whole edifice to be in the most modern style of architecture."

The new church was built by local contractor John Ross, who had also built the Rochester Elevator and the Congregational church, at a cost of $3,000. It was substantially complete in March 1881, and dedication services were held on March 17. The Rochester Era reported on the planned event on March 10: "A memorial, or cornerstone, will be placed, with appropriate ceremonies, in a reserved niche under the tower of the new Universalist Church, Friday, March 17. The public are invited."

In June 1881, one of the final details of the new building was completed. The Rochester Era reported on June 2: "A terra-cotta crest of highly ornamental design was placed upon the apex of the roof of the Universalist church last Saturday. The material out of which this crest is made is porcelain clay, and is considered indestructible, the elements, especially fire and flood, having no effect whatever on it. The crest was manufactured expressly for this church, at Perth Amboy, N.J." This is most likely a reference to the well-known Perth Amboy Terra Cotta Company, a prominent late-nineteenth and early-twentieth century brickworks that was known for creating

elaborate architectural ornaments for churches and other buildings.

In 1907, the Rochester Era reported on maintenance work being done on the building:

Among the improvements to the Universalist church is a set of new cement steps and platform. The old steeple looks rather shaky with its weather beaten appearance, having been up 27 years, and should be taken down before it blows down and hits someone.

This building, which had a seating capacity of 400 parishioners, served the Universalists from 1881 to 1907, after which it was used by other local congregations including the Lutherans and the First Church of the Nazarene. The Rochester Era reported on the sale of the building to the Nazarenes on February 2, 1923:

B. C. Chapman who recently bought the Universalist church, has sold it to the Nazarene society who will make it their church home. Fifty years ago the Unversalist church was the largest and most popular in Rochester. The frame church burned in 1878 [sic] and was replaced by the present brick structure in 1881. Rev. C. W. Knickerbocker was pastor of the old society, and was followed in 1875 by Rev. J. H. Palmer, a great preacher and a fine man. He resigned and for a number of years the society was without a pastor until 1907, when Rev. Louisa Haight was called and officiated for a year or two, since which time no services have been held and the society dwindled to but a few members and dissolved, the church property being turned over to the state

Universalist body, and they sold it to Mr. Chapman. Rev. Mr. Bearinger, Nazarene minister, informs The Era that they expect to take possession within 60 days.

The once featured an elaborate spire atop the tower and a stained glass rose window over the entrance.

According to a newspaper account of October 28, 1887, the church was not well maintained by the Society and fell rather quickly into poor condition less than a decade after its construction.The Rochester Era reported:

"The work of repairing and generally overhauling the Universalist church structure in this village has begun, Arkins & Immick having the job. The crumbling pilasters are to be torn down and replaced by new ones, the windows repaired, new trusses placed overhead with rods and braces to strengthen the roof and eavetroughs [sic] put on to protect the pilasters from the rain. The amount to be expended upon the structure is $276. This will make it perfectly safe and remove an "eyesore" that has long existed in the unsightly and dilapidated condition of the building."

In 1966, the Nazarene church sold the property. It was acquired by architect Francis Bartlett, who began a four-month renovation of the building in October 1966, dividing it into four office suites. The rose window over the front door did not survive the renovation, however. Bartlett later told the Rochester Eccentric that he had intended to save it, but it had crumbled from age.

Since 1966, the building has, at various times, housed the Cary Art Gallery and several professional offices.

"The contract for building the new Universalist Church has been 'signed, sealed and delivered' to John Ross & Co., of this village...," Rochester Era, October 16, 1880;