The dolls were a gift to the museum for Mildred Smith Coulton of Cleveland in 1955 when she was 85 years old. Mostly made in the 1800s they exemplify finely crafted English, German and French works. American-made exceptions are a leather head doll with painted features ca. 1790 and a Vermont Rockmaple-splint, square jointed doll made at Joel Ellis doll factory in 1873. Other are made of bisque, china, papier-mache, celluloid, tin, brass and poured wax. Mrs. Coulton named each member of her “family,” Beginning with her own personal dolls, Rosie, Fannie, Nellie, Bessie, Pearl, Fred and Black Bet. 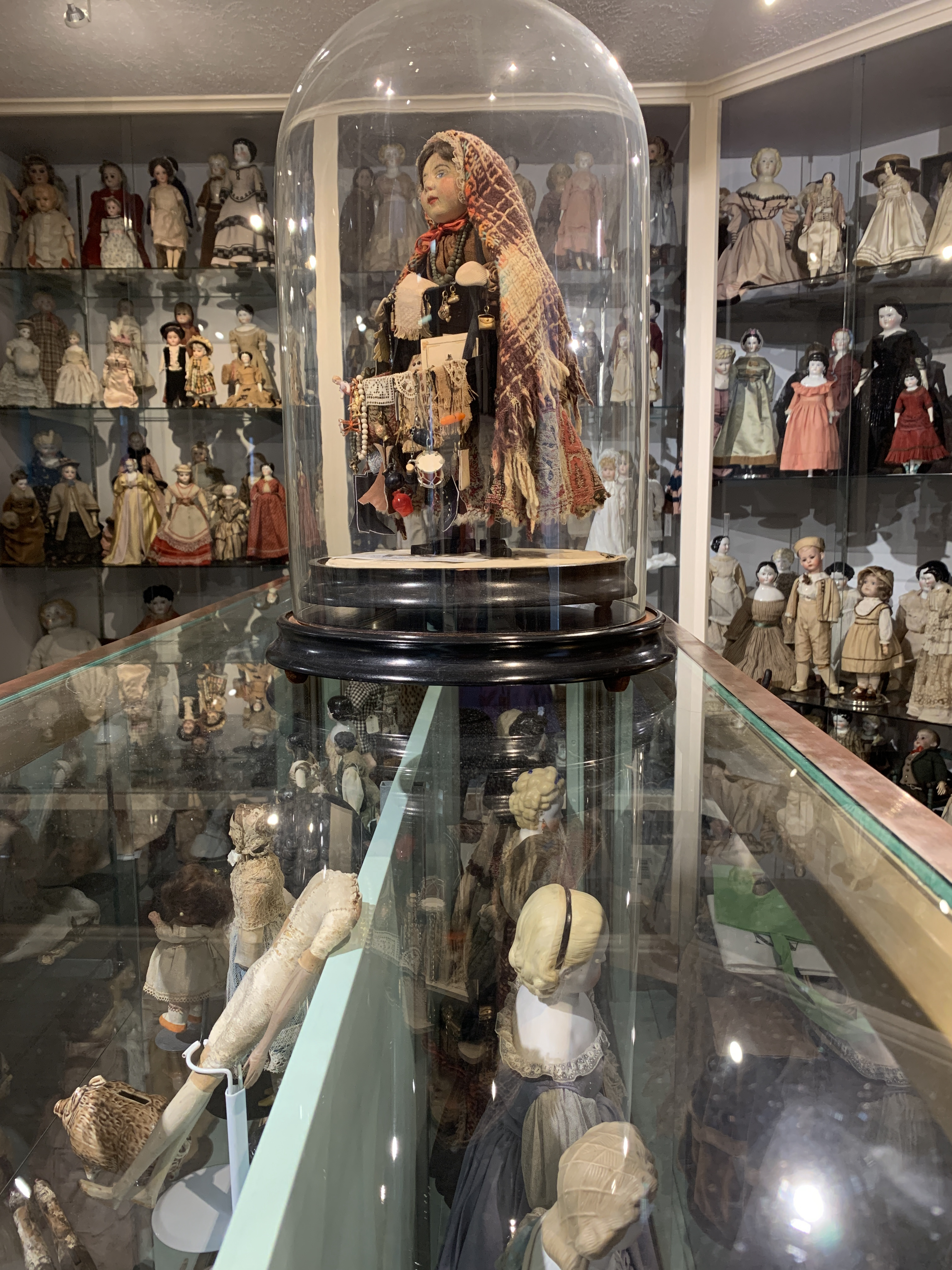 “My very own dolls! All ten of them were born and brought up, fully clothed like Minerva, daughter of Jupiter, at 77 Cedar Avenue 1871 through 1879. My playroom, six feet square, was upstairs and there I went to play alone so much of the time. I remember where all of my treasures stood and I sat in the middle on the floor or in my small green chair or walnut rocker. The small chair I have hunted long to find a duplicate one like it but never have. The rocker I have at the country house. The dolls are truly Western Reserve after arriving, though none were made here. My first was made by the N.Y. Rubber Co. The boy Fred was made of rock maple in Vermont by Joel Ellis. Fannie, a Superior Composition doll head, called the Mystery doll. I remember well receiving her Xmas 1877. I found her in bed with me Christmas morning with an embroidery yoke nightgown. She has a wrapper, alpaca dress and a waterproof cape like my own.  Nellie, also Tryphene, both china, came from Germany. Mother and I chose Nellie, the sweet face doll, at Wardwells dollar store way down on Superior St. – head and body separate each one dollar – very expensive! Her petticoat always did show and in later years my second daughter’s did the same. My fashion doll Bessie, a French bisque 1876, was a beauty, still is except her hair being puffed, is badly worn and the long curls hang down no more. The two hard rubber, Rosie and Lillie, I do not know where from but were 1873, the latter became lost before the playroom was disbanded.  My wax doll Pearl has short curls, heavy wax, probably German made. I have never seen another wig like hers. The last one was a wax also in long baby clothes of the period. I remember feeling so rebellious over her as I disliked baby dolls anyway or any clothes covering feet and a letter came with her signed from Santa. To a girl of ten that was adding insult to injury. The clothes I have put on a doll as near like her as I could find as she too went away, I never knew where, as did Lillie.

I have too, my small Black walnut table made by an uncle and my rose-bud dishes. How often I have served tea (good old Lake Erie) to my father on his homecoming! He always asked where I bought my tea and the answer was always the same, “At the Flour & Feed Store”, which pleased him greatly as that was his business in Cleveland for 40 years. When I married, the dolls and toys were forgotten. Mother put them in a small chest (old tool chest) and sent them to me at the Miles Avenue home where they lay in attic till 1930.

Then a small doll called Hitty who belonged to Miss Rachel Field, author, came to Cleveland and the Public Library arranged a party for her in Feb. by showing old dolls sent in to exhibit. I went to work cleaning up mine, took five down with my small four poster bed which was the beginning of twenty years of fun. I meet and entertain people from all walks of life, go places to find “finds” and see Beautiful Ohio on the way. My daughter and I in our vacation to New Orleans and on to California found several dolls in both places. I have been “written up” by Grace Goulder and the Women’s City Club which may have added a bit on satisfaction. I now have 330 dolls, all very good samples of the years from 1820 to 1914.”