Though it was initially designed as a simple home, where the founder of the religious movement the International Society of Krishna Consciousness A. C. Bhaktivedanta Swami Pranhupada planned to retire and write his commentaries on Vedic scripture, following his death the movement's followers built upon the original design creating the Palace of Gold. Located in New Vrindaban, West Virginia, the community was created to serve as a place of pilgrimage for ISKCON followers across North America. Planning to recreate the town of Vrindaban, like it is in India, the community was founded by one of Pranhupada's early disciples Kirtanada Swami. Despite not being builders by profession the people of New Vrindaban completed the Palace of Gold in 1979, three years after Pranhupada's death. Today the sight still holds religious significance to the movement's followers welcoming thousands of pilgrims and hundreds of thousands of tourists each year.

New Vrindaban Palace of Gold The Palace was created without any architectural design and was intended to serve as the first of seven temples in New Vrindaban.

Side view of the Palace. 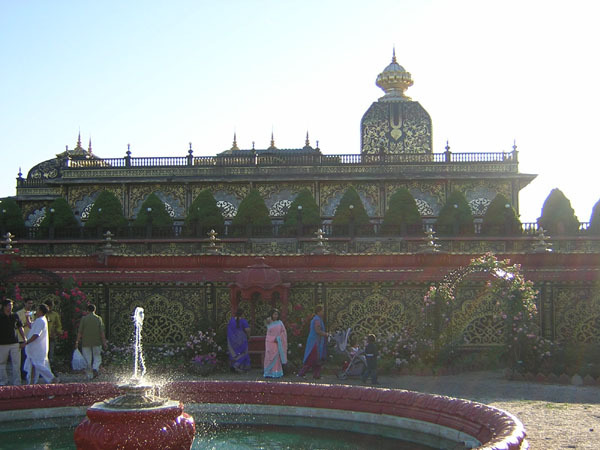 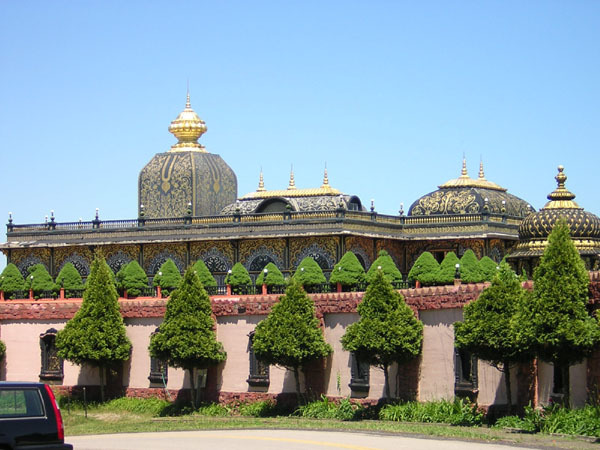 Plans to construct Pranhupada's home began in 1973 which was originally designed to be a small house. Pranhupada last visited New Vrindaban in 1976 before his death the following year and on September 2, 1979, two years after his death, the Palace of Gold was dedicated in his memory. As construction continued the design of the home grew and the Palace of Gold took shape turning the home into a memorial. The Palace of Gold welcomed tens of thousands of visitors when its doors first opened, rising to 100,000 in 1982, and nearly half a million the following year. Media outlets praised the Palace, CNN naming it one of the 8 religious wonders in the country, The New York Times called it “America’s Taj Mahal”, and was described as “Almost Heaven” by The Washington Post. For the movement's followers, it became a place of pilgrimage, welcoming thousands of faithful each year.

New Vrindaban employes one of the largest workforces in Marshall County, West Virginia, with a staff of 187 people outside their faith and community. This was accomplished through the wealth brought in by tourism to the Palace of Gold and was used in the plans to create the world’s largest Radha-Krishna temple. The mid-1980’s brought incidents of violence to the community as Kirtanananda was attacked in the fall of 1985, suffering a major head injury, and a former residence, and critic, was murdered in 1986. These incidents and the subsequent investigation by state and federal authorities undermined the authority of Kirtanananda and began the decline of the community. New Vrindaban declined in population after 1986, falling from the 377 adults down to 131 by 1991, with many leaving to join other ISKCON temples. In 2009, of the 125 followers of ISKCON living in the region 50 lived in the temple community, but of the other 75, few maintained regular, if any, contact with the community.