The Eads Bridge in St. Louis Missouri stretches over the Mississippi River into Illinois. The bridge connects St. Louis, Missouri and East St. Louis, Illinois. The designer and builder of the bridge, James Eads, is how the bridge got its name. Eads had never built a bridge before this one and used post Civil War engineering to create it. The opening day of the bridge was July 4, 1874. Until the construction of the Gateway Arch in 1960s the Eads Bridge was the symbol of the city. The building of the bridge was very risky because no other steel alloy bridge had been built yet, making it the first in the world according to the International Council on Monuments. The bridge was tested in June before its grand opening by having an elephant from a zoo walk across the bridge to test its safety. They did this because research says that elephants have a keen since as to whats stable and whats not, since the elephant walked across the bridge the workers took it as being stable. Today the bridge is open as a two lane even after 140 years of operating it is still a main attraction is St. Louis.

The Eads Bridge under construction in 1874. 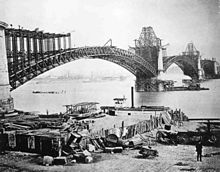 At night time from the Eads Bridge you can see the Gateway Arch. 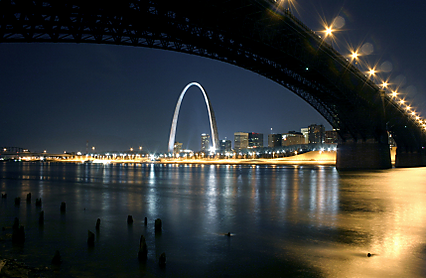 The Eads Bridge was built by a self-taught genius who had never built a bridge before. James Eads was very curious in steamboats and transporting goods across the Mississippi River. By 1857 Eads' salvage company was the most successful on the river and he retired at age 37. By the 1960s Eads realized how important transportation across the Mississippi River was so he decided to play his part in society and build the city a bridge connecting the two states. Getting approval for the bridge was difficult because the bridge construction could not disrupt the river traffic, it had to be tall enough for steamboats to fit under, and it had to be able to withstand the rough river water current. Construction for the bridge began in 1867. A result of the bridge having to be built so deep into the oceans floor the workers started getting sick and some even paralyzed from the pressure of the water they were dealing with. The design of the bridge was so radical that Eads had to get many permits approved. Eads introduced many new building and design techniques by pushing the bridge to be a new icon for Civil Engineering.

The steel he wanted to use from his bridge had never been used in construction before. Andrew Carnegie swore that the material Eads wanted would fail under pressure during construction, but after must debate Eads got the steel he needed to continue building the bridge. When the bridge was finished on July 4, 1874 and celebrated with a 100 gun salute. A parade that was around 14 miles long went throughout the streets of St. Louis with fireworks being set off in the evening. This was not only a celebration for the city of St. Louis but also the United States because they had created a new way of design for bridges. The bridge's overall length is 6,444 feet and cost around 10 million dollars to make, not including the land they purchased or the debt they got their selves into.

Each problem that Eads was faced with while working on the bridge, he came up with a solution. Whether it was not enough material to finish the bridge, the material not being strong enough to withstand the bridges needs, or natural disasters damaging the bridge, Eads had positive and successful new ideas. The Eads Bridge sees about 8,000 vehicles daily which has slightly decreased since the Stan Musial Veterans Memorial Bridge opened in February 2014. The Eads Bridge was named a National Historic Monument in 1964 by the National Park Service. The Eads Bridge is a constant reminder to the city how far they have come over 140 years and how they will continue to succeed.

Open all the time to traffic.