Located right next to the Gowen Field Air National Guard Base, Idaho Military Museum has a variety of static displays and exhibits that preserve and share the military history of Idaho and the Idaho Air National Guard. The museum has not only a great variety of exhibits on the inside it includes a static exhibit on the out side and two flight simulators on the inside. 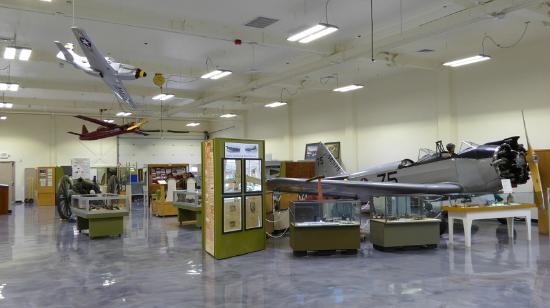 Trying to narrow down what to say about this museum posed somewhat of a challenge but after a little research this little museum has so much to offer. When you first walk into the museum there is a small exhibit highlighting the person for whom the base beside it was named after. As you continue to walk A huge plane from WW2 greats you as the lights shine over the paint. You wouldn't think that food would be a big attraction but there is also an exhibit on how food rations has changed over time showing not only the packaging but the contents as well.

Idaho isn't the place where you would think to find anything on the Navy but a new exhibit at the museum shows tribute to the branch from all wars and also has several display cases attributed for the exhibit as well.  One of the key items in the Naval display is a piece of the USS Boise which sustained tremendous damage in a battle with the Japanese in 1942. While the Navy exhibit primarily focuses on the active duty Navy there is a small section dedicated to the Farragut Naval Training Station.

The Idaho Air National Guard exhibit seems to be the real reason the this museum exhibits. Being right next to the Gowen Field Air National Guard base there is a sense of pride that can experienced that you wouldn't if you were talking about a place a thousand miles away. Everything from flight suits and head gear to photos that show the history of the Idaho National Guard. Some really cool parts of the exhibit include two flight simulators and a mannequin in an F-4 Flight Suit.

As you leave there is a static display of military vehicles from all eras of our nations history. Though the museum isn't in a big city or has millions of dollars in exhibits its a great place to come and visit; so if your near the location and you get a chance stop by to see some of Idaho's great military history.