The Bingham-Waggoner Estate is considered one of the most historically significant homes in western Missouri. Built in the 1850s, the home is a well-preserved example of Italian Villa architecture and is situated on a 19-acre partially wooded property. Today, the Bingham-Waggoner Historical Society operates it as a historic house museum. In addition to its architecture, the house is also significant for its association with notable 19th-century artist and politician George Caleb Bingham (1811-1879), who lived here from 1864-1870; the Santa Fe Trail; and the Waggoner-Gates Milling Company, which was located across the street where the National Trails Frontier Museum is now. The estate was added to the National Register of Historic Places in 1980.

The Bingham-Waggoner house was built in the 1850s and is one of the more beautiful and historic homes in Independence. 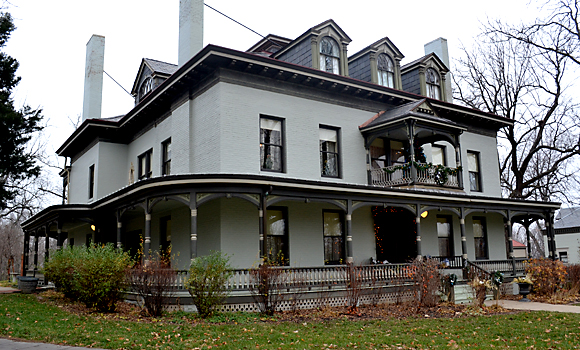 A room in the home decorated for Christmas 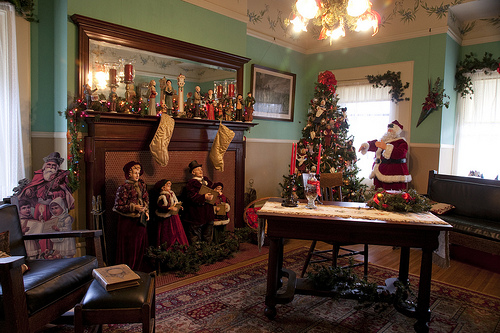 Another room in the home 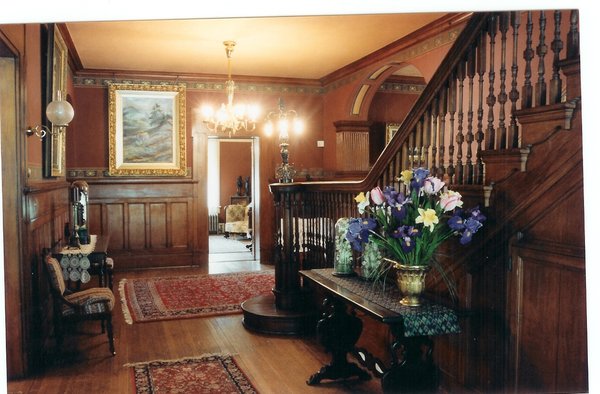 "Order No. 11" Painted by George Caleb Bingham in 1868. Photo: Image in the Public Domain, via Wikimedia Commons 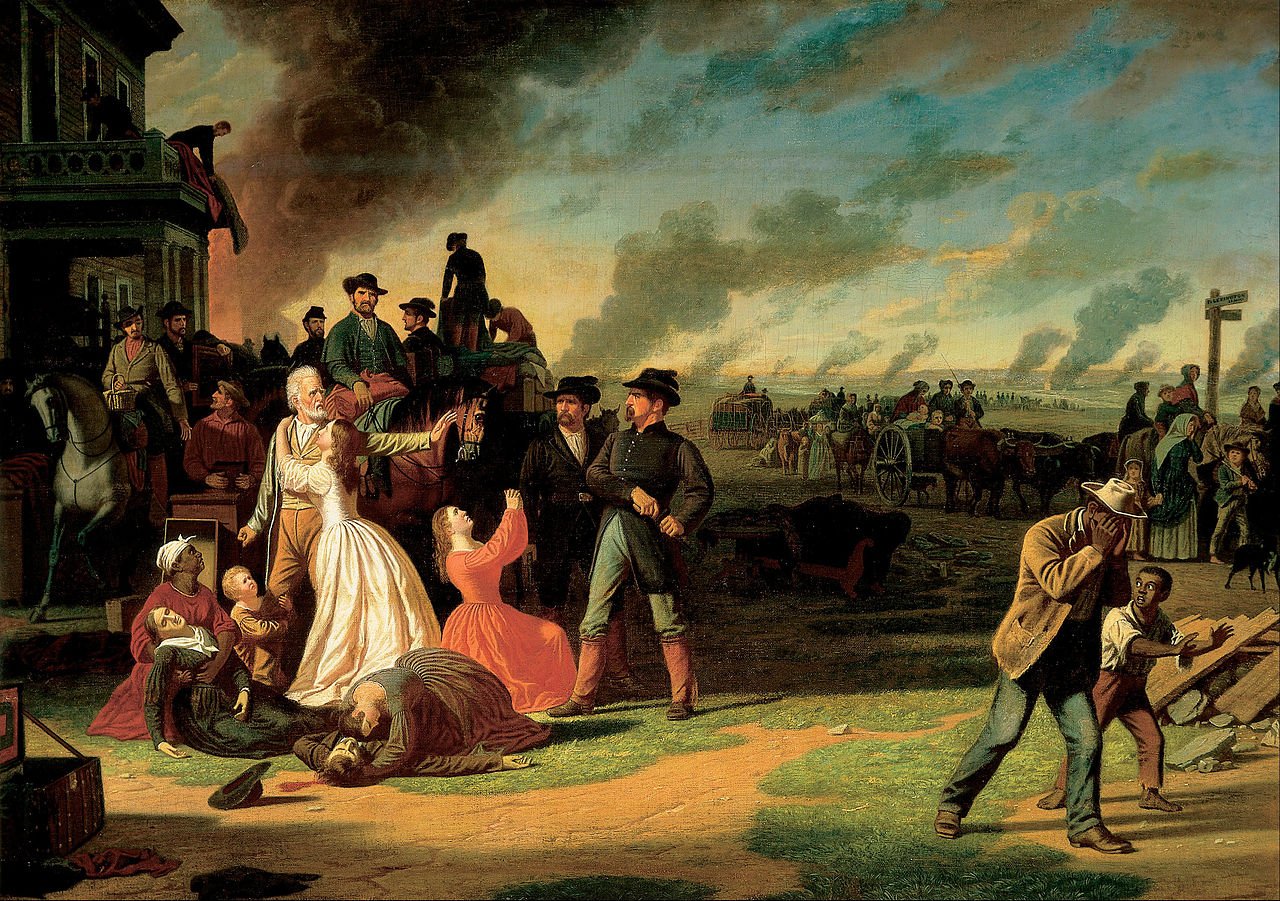 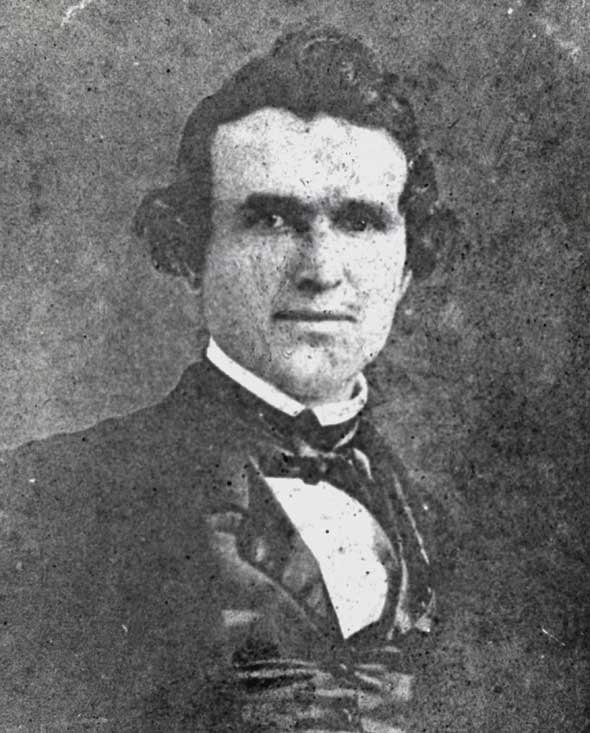 Osage Street, the road along the eastern side of the estate, was once part of the Santa Fe Trail. The pavement is laid directly over the trail and the street is essentially the same width as the trail. Also, research suggests that the trail crossed over the southeast corner of the property in a southwesterly direction.

Bingham and his family moved to the estate shortly before the Civil War. He maintained a studio near his home, where he painted his famous "Order Number 11". Order Number 11 was a military declaration issued in Kansas City in August of 1863 by General Thomas Ewing Jr. that ordered everyone living in Jackson, Cass, Bates, and Vernon counties to vacate their homes within fifteen days. This order was a retaliatory response to the bloody raid (August 21, 1863) on Lawrence, Kansas perpetrated by Confederate guerilla William Quantrill and his band.

Bingham, who was State Treasurer of Missouri during the war, resented the order and personally went to General Ewing’s superior officer in an attempt to have the order overturned. This failed and the order went into effect but ultimately backfired. George painted Order Number 11 in 1968 to show his displeasure with the order. In 1870, Bingham completed the second, slighlty larger version of Order Number 11, which soon became one of the most publicized pictured of that time period.

In 1870, Bingham sold his home to Mr. Francis Eames, and moved to Kansas City. There, he served as Police Commissioner and as Assistant General of Missouri. He was also appointed as the first professor of art at the University of Missouri. He passed away at his home on July 7, 1879.

Successful Pennsylvania miller Peter Waggoner, Sr. sent his son William, to Independence to search for new business opportunities. In 1867, the family bought the "Old City Mill" from John Overfelt and moved into the house. They quickly made a name for themselves as producers of high-quality flour for baking. Eventually, they made changes to the house during the 1890’s when William Henry, Jr. and his wife moved in. The Waggoner family lived in the house until the death of Harry K. Waggoner in 1976. The city and a group of citizens purchased the home in 1979 to turn it into a museum and park.

The house also has a connection to President Harry Truman. His wife Bess' grandfather, George Gates, became a partner of the milling company. The name "Gates" was added to its name to reflect the change.