Ozona is the “Biggest little town in Texas” and Crockett County Museum showcases the development and growth of this wonderful little town. You will be surprised at how much history can be found in this small part of the vast world called West Texas. The Crockett County Museum became a reality in 1939. It was located in the school until 1958 when it was moved to the Courthouse Annex. The building itself has an interesting history. Originally, it was the Methodist Church of Ozona. It was built in 1926, but burned in 1942 leaving only the rock structure. The building was turned into a hospital, which was there until 1956. It was then that it became the Courthouse Annex which is where the Crockett County Museum landed two years later in 1958. Finally, in 1998 the museum began restoration to solely occupy the three-story building. The museum is host to many events throughout the year. Among our more noteworthy events are our yearly Veterans Exhibit and the Wool and Mohair Style Show each fall. 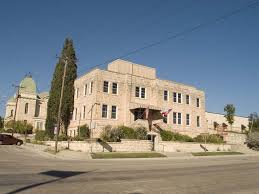