Fort Payne’s construction began on April 13th, 1838. This was at the same time the U.S. government was removing the Cherokee Indians from their homes in North Carolina, Tennessee, Alabama, and Georgia and routing them to Oklahoma—known as the Trail of Tears. The fort was used as an internment camp for the Native Americans that were unwilling to leave their homes. It was named after Captain John G. Payne who selected the site of the fort because it was near a large spring that would aid both the soldiers and Native Americans, and their livestock. The last group of Cherokee people were moved from the area in October of 1838. Today, the site of the fort is not open to the public but the only piece remaining of the fort, the chimney, can be seen from a distance. The historical marker is located in the city park. 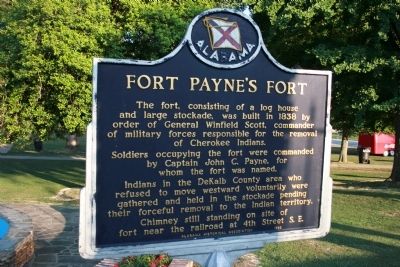 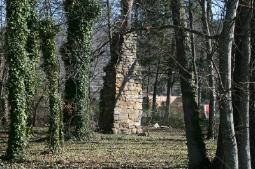 Fort Payne was built by twenty-two men from the Alabama militia in April 1838 and was located in, what was then known as, Willstown.  Willstown was an important village to the Cherokee Indians. (2) The fort consisted of a large stockade and a log house.   General Winfield Scott was the commander of military forces.  He ordered the fort to be built as he was responsible for the removal of the Cherokee Indians. (5) It was Captain John G. Payne who selected the site of the fort because it was close to a large spring that would benefit all of the people as well as the livestock.  The fort was named after Captain Payne. (1)

Fort Payne acted as an internment camp for the Native Americans that did not willingly leave their homes until they were eventually forced to move to Oklahoma.  The “forced exile” became to be known as the “Trail of Tears”. (2)  The government did not provide a lot of transportation needs for the Cherokee people.  Because they lacked enough wagons to carry everything, a lot of their possessions ended up having to be left behind.  There was a lot of suffering and hardship for the Cherokee on their way to Oklahoma –hence the name “Trail of Tears”.  It was one in every seven Indians that died before they reached their intended destination. (4)

Sequoyah, a very important Cherokee Indian, was among those who walked the “Trail of Tears” with his people.  He had invented the Cherokee alphabet in the 1820s.  “Sequoyah is the only man in history to conceive and perfect in its entirety an alphabet or syllabary”. (3)  It took him twelve years, and it was while he was in Willstown he finished the alphabet.  The Cherokee people now had a way to write letters home, record events, and read military orders.

The last group of Cherokee people left Fort Payne on October 3rd, 1838.  Useless to the military now, the fort was abandoned.  Later on, settlers ended up occupying the site.  They lived in the log house at the fort and built other structures around the site.  The stockade was dismantled, but until it was torn down in 1940, the log cabin still stood.  The only remains of the fort today is the chimney from the log cabin.  The site of the fort is fenced off and preserved.  It is not accessible to the public, but can be seen easily not too far away.  The historical marker is located in the city park. (1)