This one-room schoolhouse was originally located in Bunker Hill in the northeast corner of Manatee County. The building served as a one room schoolhouse from 1908-1929. In 1929, B.D. Gullet bought the building and moved it to his property near Duette (a little further east than Bunker Hill). Mr. Gullet was a teacher and Supervisor of Education for a total of thirty-seven years. He and his wife, and then later his daughter, Sallie Gullet Bradley, lived in the house for 60 years. The Manatee County Historical Commission accepted the offer to move the former schoolhouse to Manatee Village Historical Park in 1989. Volunteers worked tirelessly to restore the building to its original condition. This meant removing additions and modern plumbing. The building was completed and dedicated in 1990. 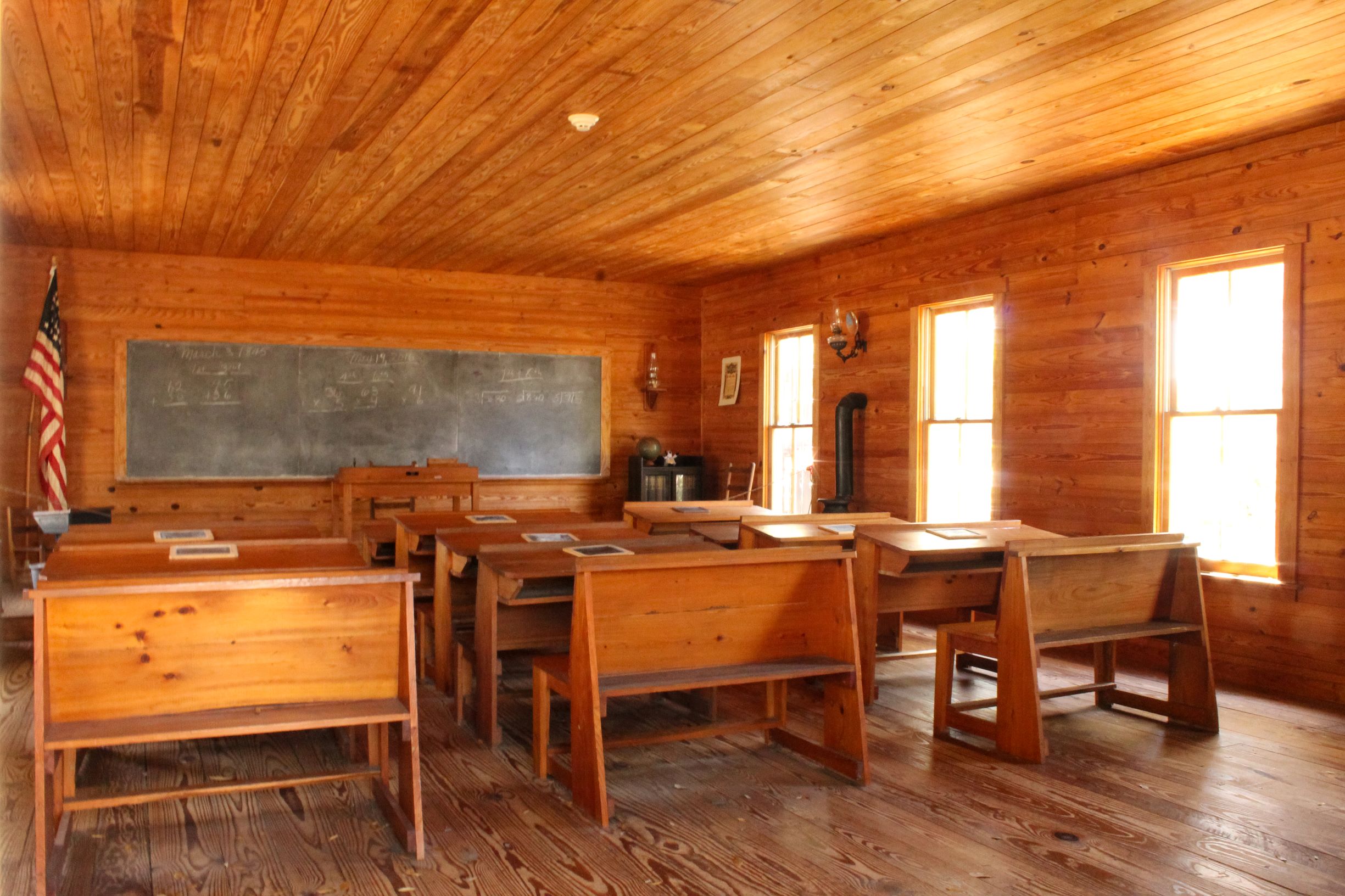 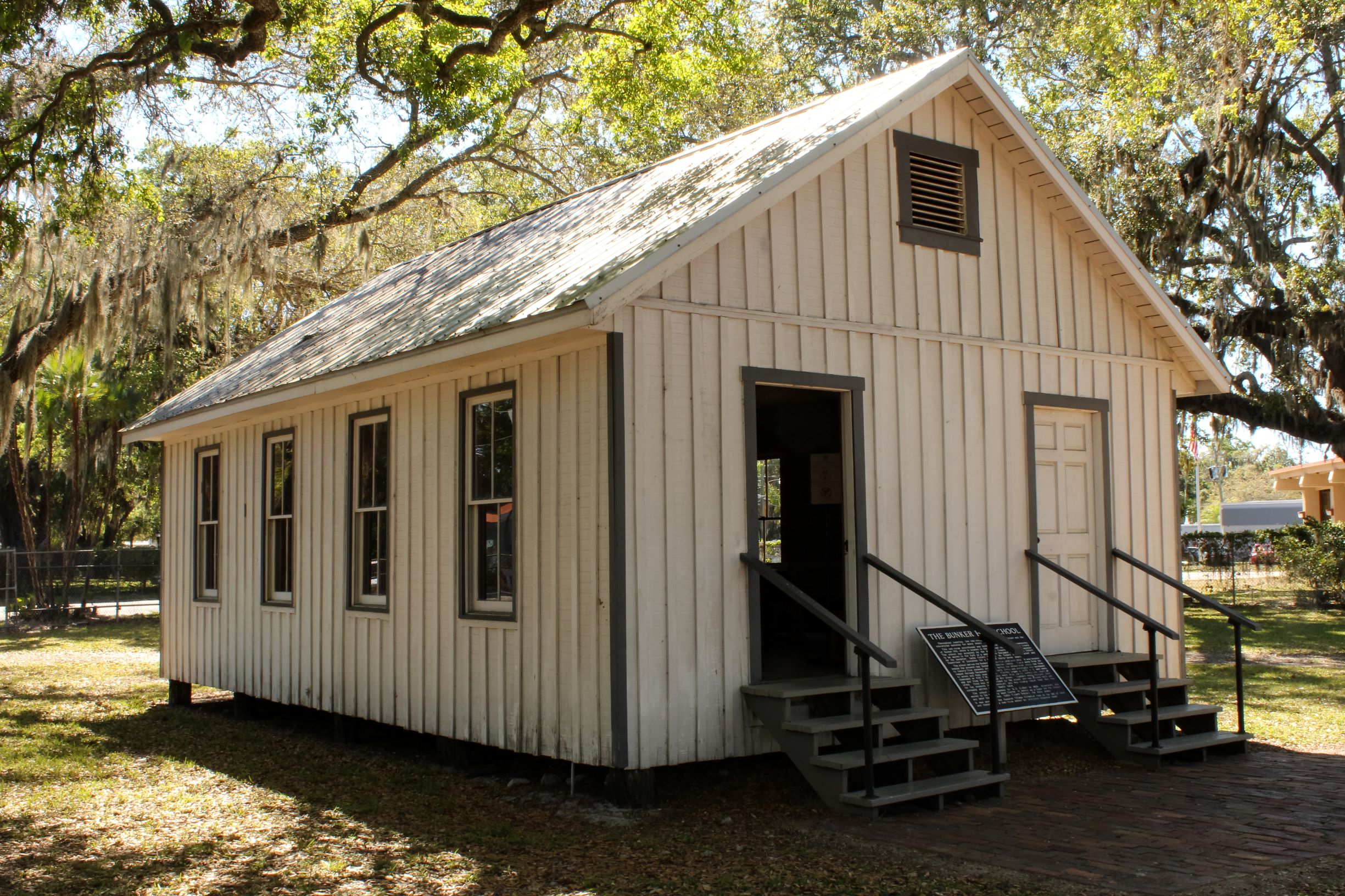 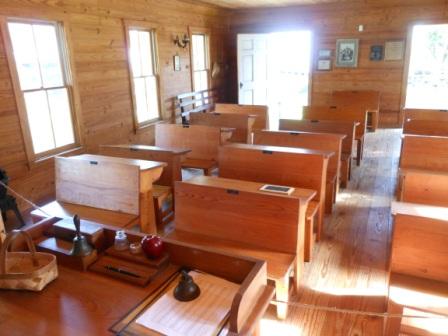 View of schoolhouse from courtyard 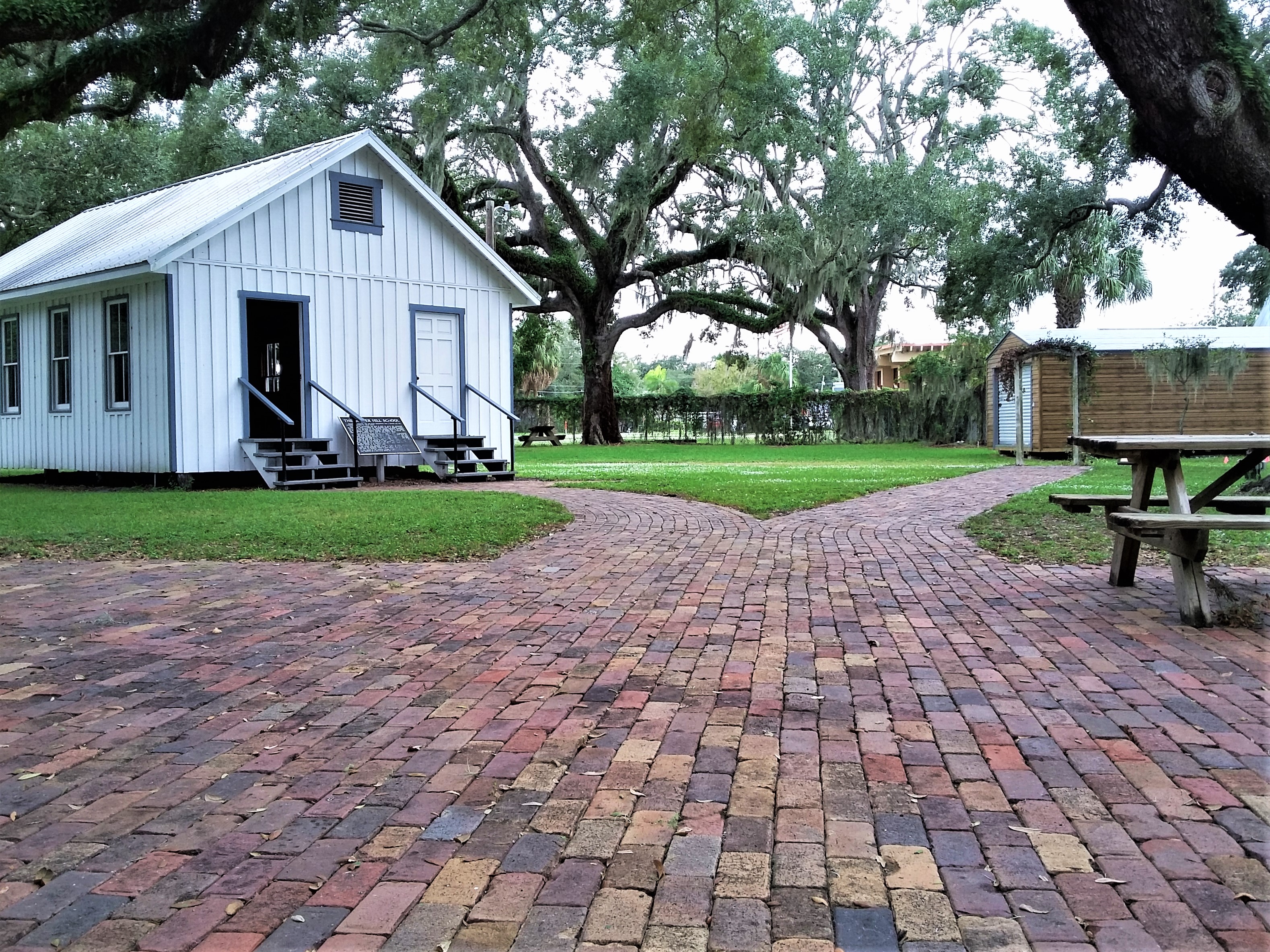 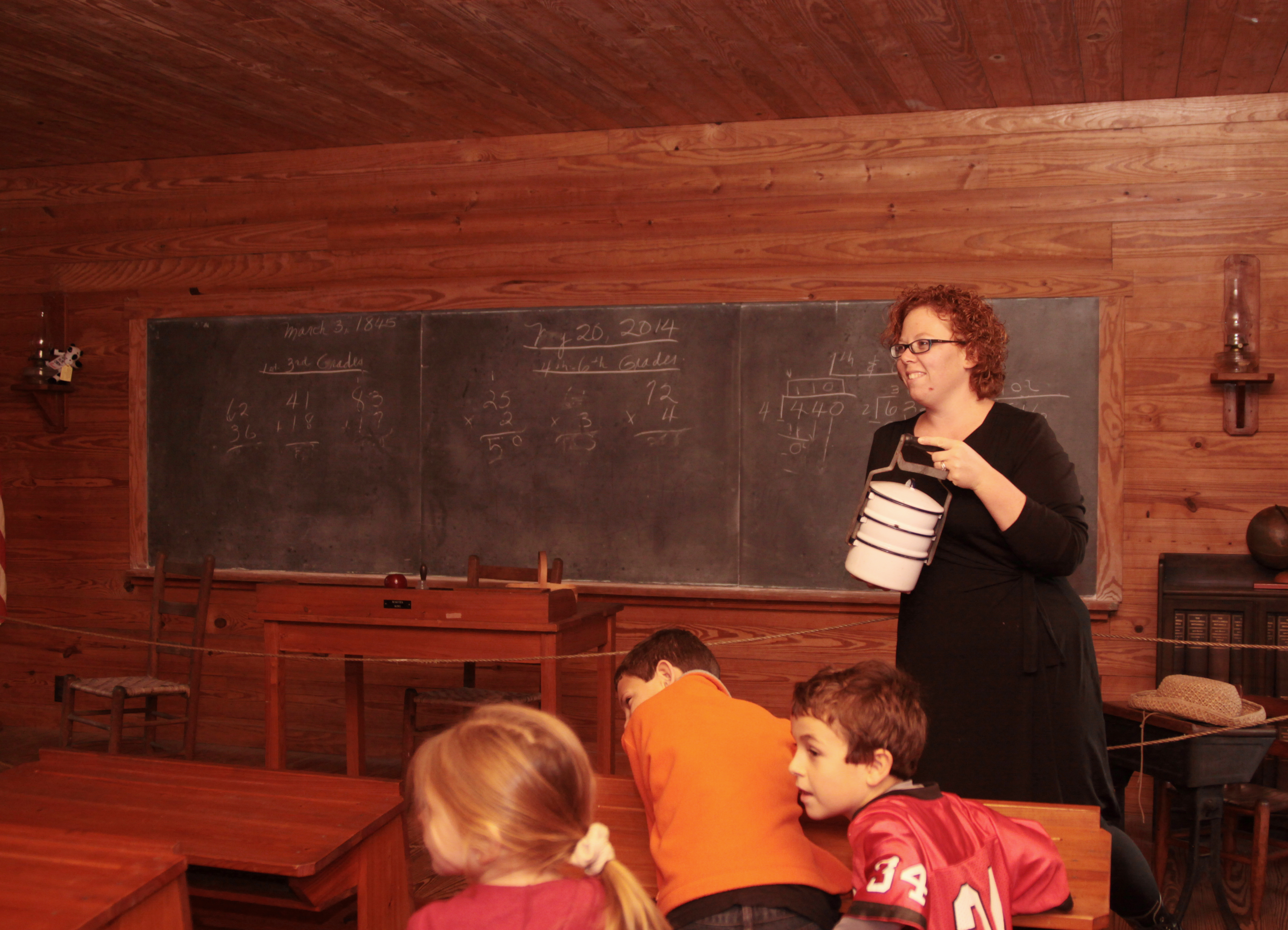 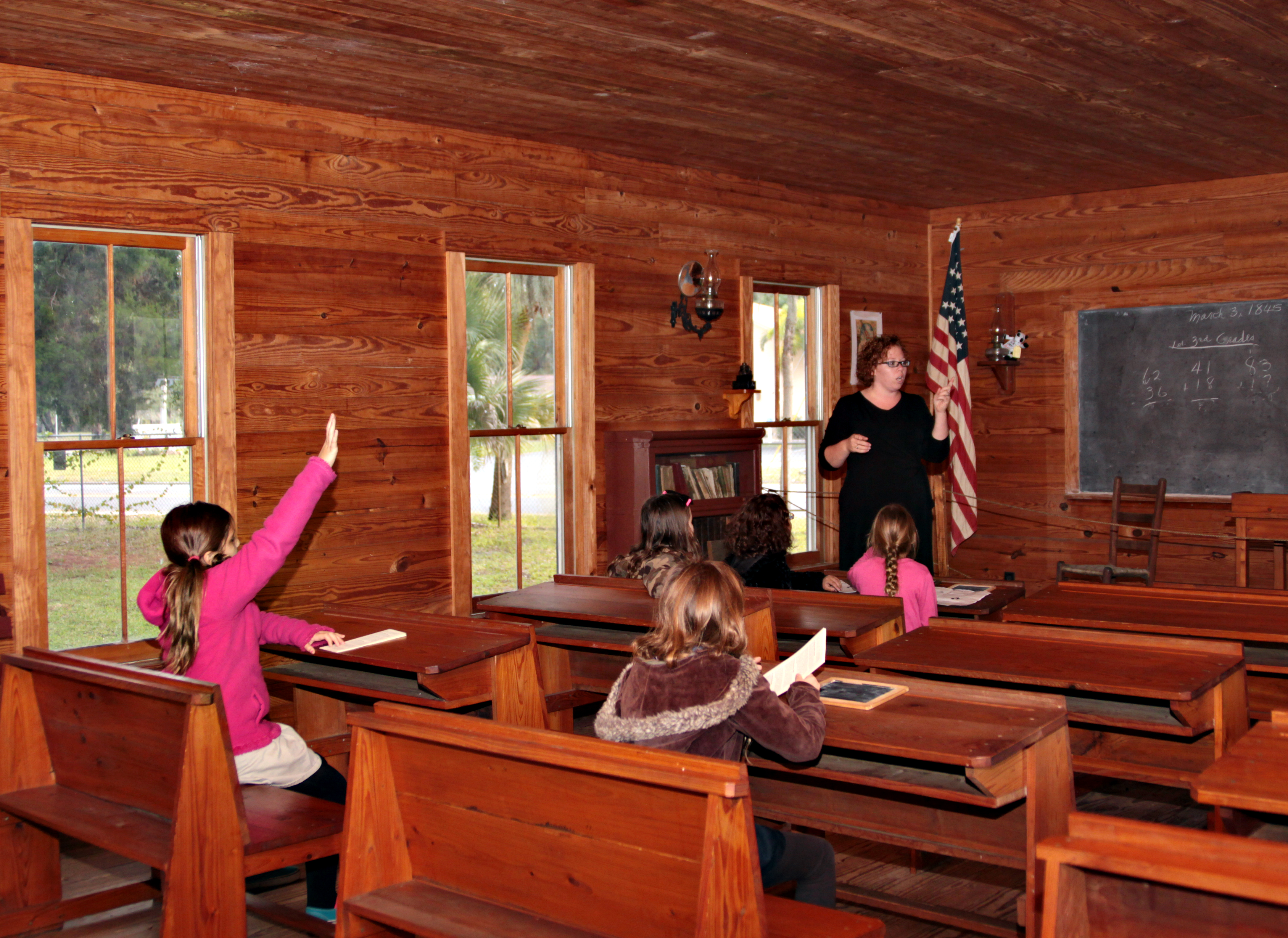 In the first few years, the school year ran August to December. Eventually it was increased to 7 months and then 10 months. The shortened school years were in part to allow students to help their families, usually on the farm.

Student’s excused absences for missing class included being sick, of course, but they also would have skipped class to help their family’s business and they might miss class in the event of bad weather. It was difficult for students to get to the schoolhouse. Many had to walk several miles barefoot. Some students also had to cross a river or creek that might become impassable after heavy rain. So in the event of bad weather, attendance tended to be low.

Going to school in 1908 was different from school today. Some things were similar: children played games, had chores, and worked on reading, writing, and math. One of the biggest differences, though, is that this one-room schoolhouse was the only school in the community, serving first grade through eighth grade. And because students often had to take time off to help their family, ages ranged from 6 years old to 26 years old.

The younger children worked largely independently using charts. The older students had books. Some of the oldest children had up to three books. Schooling was largely based in memorization and recitation. Students would recite their lessons in front of the class.

The one-room school house did not have electricity or running water. You’ll notice there were no indoor bathrooms. At the time, there was only one outdoor bathroom, reserved for the girls. The boys followed a path into the palmetto bushes. Teachers' responsibilities included filling the lamps and cleaning the chimney; bringing a bucket of water and a scuttle of coal (if needed for the fireplace) to the school; and whittling each child's feather quill pen before the day's lessons.

Teachers would have graduated a Normal School, which was a college specifically designed for becoming a teacher. Pay for teachers was poor and there was a high turnover. In 1913, Bunker Hill teachers were paid $45 a month (about $1,200 in today's dollars), plus $10 for room and board.